Eye contact with the farmer stood beside the road was maintained for far longer than strictly necessary.

The hope was he would stop us driving any further down the gravel track at the top of Col de l’Arpettaz.

Ultimately though he simply turned round and walked back to his barn. Apparently we were good to go.

What the hell were we doing? We’d already scared ourselves silly several times that day, on the mountain roads around Lake Annecy in eastern France, thirty miles south of Geneva.

Yet here we were, higher than ever, bouncing down a single lane track with no barriers.

But the dry fear was also tinged with a tingling sense of adventure.

The former is an intimidating sharp cascade of tight hairpins – albeit one lined with dense trees and few opportunities to see quite how high above Flumet you rise. It tops out at 1581m (5187ft).

The similarly high Aravis is a classic Alps pass and a regular on the Tour de France. It may be punishing for riders but doesn’t present any particular challenge for drivers.

Route des Montagnes soars high above them both (though, thanks to eyes-on-stalks intense concentration, it was beyond our capacities to check precisely how high we get).

A closer look at the map shows Route des Montagnes is one of a web of tracks marked with a narrow black line (at least on our Michelin map) . We could be up here all day, or all week.

With no vehicles in sight – or people or animals for that matter – the fear is less of a white knuckled passing manoeuvre, right on the crumbling edge, than the weather.

A torrential downpour had earlier seen us eating lunch while soaked to the skin.

The rain was lighter up here but we were between layers of swirling cloud. There were also several gushing alpine streams to fjord, some lined with boulders on the lee side where we opted to pass, fearful of shifting sands and a subsequent vertical drop.

Truth be told, our off road skills – such as they are – were never called upon too heavily. It was enough to have the car in gravel mode while we certainly took it very steadily indeed. Our half day Land Rover Off-Road Experience at Luton Hoo had served us well. 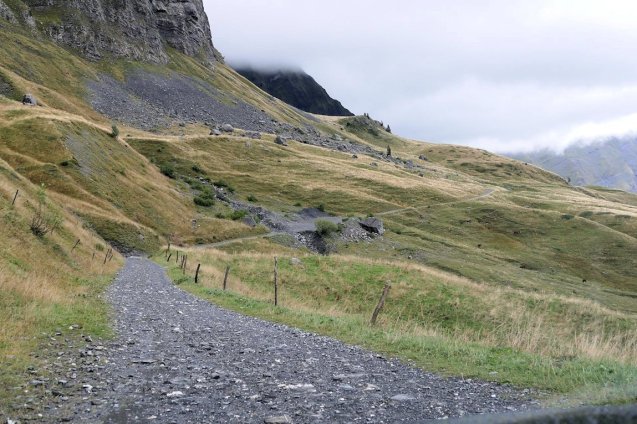