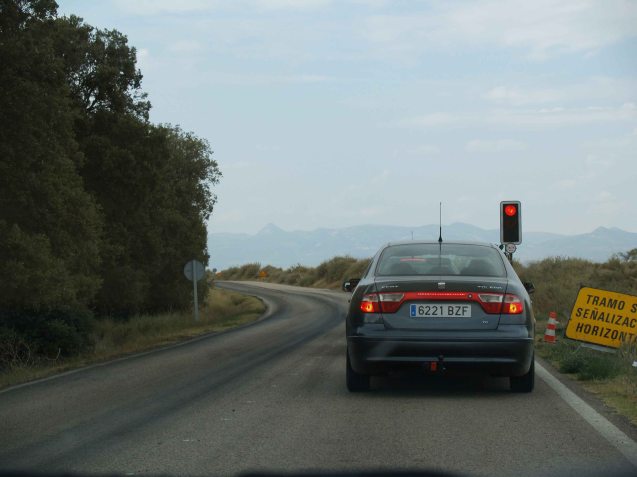 Someone we know says he never pays Spanish road tolls. He pulls up to the booth with a cheery, ‘I’ve already paid love, I’m British.’

That’s a bit rich from someone who has lived in Spain for fifteen years, i.e. during the whole time the amazing motorway network was built, with a lot of help from the EU. And he’s not the kind of person you imagine diligently filling in his tax return each year either. Anyway, he swears they always let him through.

He’s not the only one not paying tolls. For one reason or another, few people do.

In Catalonia, of which Barcelona is the capital, a popular form of protest as it moves ever closer towards independence is ‘Bona Nit, no vull pagar!’ (‘Good evening, I will not pay’).

Josep Casadella became a minor internet sensation with this video of him saying just that. Hardline Catalans resent their toll money funding roads in the rest of the country. The region has three times the proportion of toll roads as Madrid, for instance, according to the Wall Street Journal.

Meanwhile, the Madrid motorways are in real trouble. The road to Toledo entered receivership in May, soon followed by five more major routes. Traffic levels are far below estimates and the heavily indebted operators are struggling.

There’s a big debate going on about whether to introduce a vignette toll system instead.

It’s not unknown for toll roads to get in trouble. Our own M6 toll road has had similar woes, though not as serious, and for exactly the same reason: there’s a free alternative. At the same time as the remarkable motorway network was built, the longest in Europe, so was a shadow system of main roads, none of which are tolled.

To make matters worse the local road network is in notoriously poor condition. The Spanish Roads Association issued an immediate call earlier this year for €5.5bn to get it up to scratch. Read an authoritative summary of the state of Spanish roads here.

The tolls are commonly thought to be expensive, but are significantly cheaper than in France. The 385 miles Madrid-Barcelona costs €25.50 while the 290 miles Paris-Lyon is €32.30 (see Spanish toll charges here).

At the end of the day, their loss is our gain. On Spain’s very quiet, modern roads through some of Europe’s most spectacular scenery, you get a lot of bang for your buck.

2 thoughts on “Spain’s roads in crisis.”