There are no facilities bar the shade of the road passing overhead, lots of places to hide behind for a wee and a massive wheelie bin for rubbish. 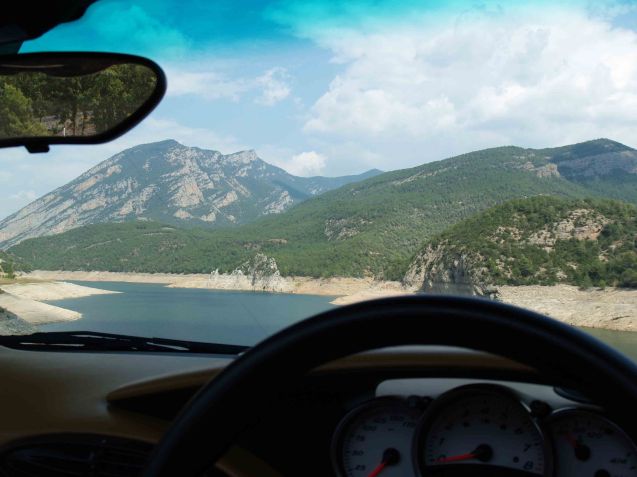 Non-deliberately we’ve stopped here twice. The Pantano de Oliana is 85 miles north west of Barcelona, on the C14 between Lleida and Andorra, in the north east of Spain and north west of Catalunya. Both times were a few years ago but, according to Google maps, nothing has changed.

In September 2006 we were heading south to the Ebro Delta past Tarragona, with 130 miles to go (most of it on the C14). The delta is an unspoilt area of marshland on the coast with quiet beaches and lots of wildlife – including Peregrine falcons (though they call them Maltese falcons) – next to the wild Els Ports national park.

In March 2008, we were heading north, to Perpignan, just over the border in France, with 120 miles to go. The long drop down into the city is along the spectacular Têt river valley through the Rousillon wine district.

Oliana is the village a mile south, population 2,000, well known for being the birthplace of the Taurus electrical appliance company. The old part is set on a hill with a ruined mediaeval castle, Romanesque church and an ‘ice well‘ museum with an original well, 5m in diameter, and zig-zag corridor to keep the heat out.

There was a controverisal plan to build a dual carriageway by-pass around Oliana a few years ago but it seems to have been dropped.

A Pantano is a hydroelectric dam reservoir, in this case dammed off from the River Segre.

The large peak on the left is El Coscoller, 4,420ft, part of the Serra de Turp ridge in the southern foothills of the Pyrenees. The village is 1500ft above sea level.

Hiking and climbing are well established in the area and there are skinny roads all over. There are plenty of campsites in Oliana but just one hotel, the well regarded Hotel Cal Petit. It has great views, a restaurant, breakfast terrace and rooms €60-150. The owners are motorbike fans but don’t hold that against them.