Since announcing a new service in October it’s all gone a bit quiet at Euroferries. 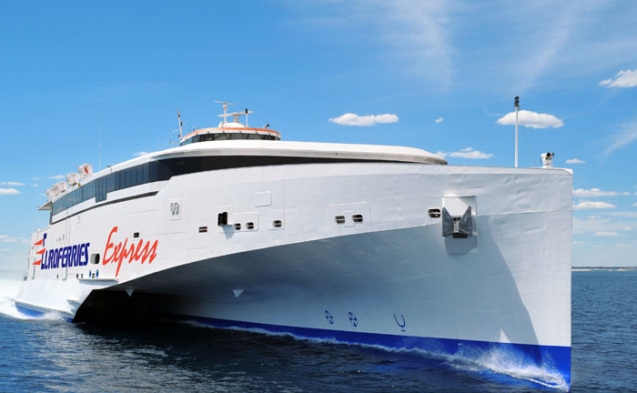 Euroferries’ 102m Austral high speed ferry is on its way from Australia.

Euroferries’ new high speed crossing between Ramsgate and Boulogne was scheduled to start in February.

There is no solid news but DriveEuropeNews.com can at least report that the service has not been cancelled.

A source close to the company says a revised start date is yet to be set but is unlikely to be before Easter.

Euroferries management are apparently more focused on getting the operation up and running than communicating progress with potential customers.

The new route was greeted with some scepticism due to a previous failed venture. A councillor told the local newsite in October, ‘We need to see the boat in Ramsgate before we start jumping up and down.’

The boat has yet to arrive from the manufacturers in Australia. It was due to be painted and refitted en route.

Euroferries is currently not accepting bookings. Fares are advertised from £49 each way with a ‘berth to berth’ travel time of 75 minutes.

The fare also includes free travel insurance for European trips of up to eight days.

One thought on “The latest on Euroferries. Postponed maybe but not cancelled.”