2013 is the European Year of Air. The Commission has launched a crackdown on countries in breach of air pollution limits. There’s a long list of miscreants and an obvious culprit (or should that be scapegoat?) 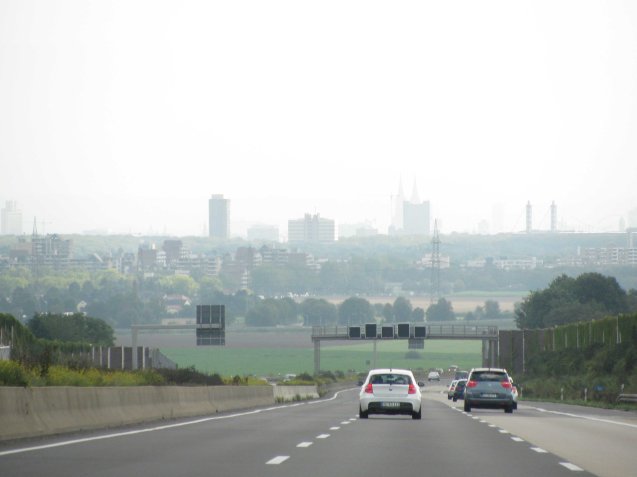 Dropping into Cologne, September 2011, the twin spires of the city’s famous cathedral just visible through – we thought – early morning haze.

The French were first. On February 6, Ecology minister Delphine Batho announced the Paris ring road speed limit would be cut to 70kph and new Low Emission Zones (LEZ) introduced across the country.

Although she didn’t say so, this was all in direct response to a call made two weeks earlier – by the European Commissioner for Environment Janez Potocnik – for ‘a new approach to air quality’.

Immediate legal action would be taken against countries in serious breach of the rules he said – namely Bulgaria, Latvia and Slovenia – while another fourteen countries – France, Germany, Austria, Belgium, the Czech Republic, Greece, Spain, Italy, Hungary, Portugal, Poland, Romania, Sweden and Slovakia – were put on notice.

Germany followed France on February 28. Headlines in mass market daily Bild proclaimed that 33 cities were in breach of EU air quality rules and that drivers faced more restrictive LEZs, or even complete bans on cars in urban centres.

This, despite a significant ramping up of the country’s already extensive LEZ system on 1 January 2013 – the results of which are naturally yet to be determined – and an official report in 2012 which said that air quality by some measures was actually worse than before the LEZs were introduced in 2008. It blamed intensive farming, the weather, traffic and particularly the fashion for log burning fires.

Despite not being on the European Commission’s blacklist, the UK – or more precisely, London – still felt the need for action on air pollution.

In the midst of the French and German headlines – on 13 February – London mayor Boris Johnson make a shock announcement: the world’s first Ultra Low Emission Zone.

By 2020 he said, ‘My vision is a central zone where almost all the vehicles running during working hours are either zero or low emission. This would deliver incredible benefits in air quality and stimulate the delivery and mass use of low emission technology.’ (London has operated an LEZ for many years though it hasn’t applied to passenger cars.)

Read the small print however, and the mayor’s announcement is actually a masterpiece of ifs and maybes: ‘[The mayor] has asked Transport for London to prepare plans to look at introducing a scheme that would aim to ensure all vehicles driving in the centre of the capital during working hours would be zero or low emission, and the feasibility of introducing such a scheme from 2020.’

The press release also makes clear however that the current LEZ has not reduced at least one pollutant as much as hoped: ‘It has emerged that Euro vehicle standards have not actually reduced NOx emissions for vehicles operating in urban environments to the level that was forecast.’

France says the Peripherique speed limits will be reduced before the summer, and that it will publish plans for more LEZs by the end of 2013. We’re still waiting to hear exactly what Germany will do, or the other twelve countries in the Commission’s sights.

It’s inevitable they will have to announce restrictions on cars in major towns and cities. Can air quality-driven Low Emission Zones succeed where controversial Congestion Charge Zones have so far failed?

2 thoughts on “Air quality: the back door to car bans?”