It rained when we were on holiday

Day two is another easy hop, 280 miles, from the southern Netherlands to south west Germany, on historic – if not yet Historic – roads. Click here for the route map.

Travelling light. Estate cars are not the most glamorous companions on transcontinental road trips but at least you can take absolutely loads of stuff with you. Note the camping mats and sleeping bags. The theoretical advantage of an estate is that you can sleep in it, though – we’ll come clean straight away – we were denied that particular pleasure this time. 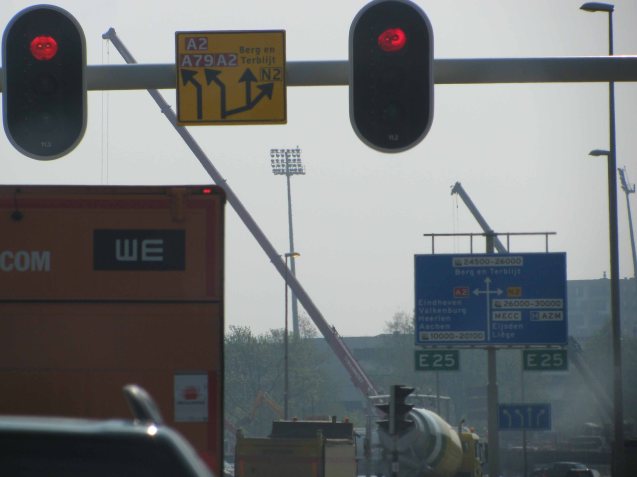 Maastricht is in the middle of a monumental project to bury the A2 motorway that runs parallel to the river in the east. By 2016 through-traffic will underpass the city in two 2×2 stacked 2.5km tunnels. Up above, thousands of linden trees will create a quiet, residential ‘green ribbon’ running through the city, thus putting the finishing touch to what is already probably the best all-round place to live in the Netherlands. 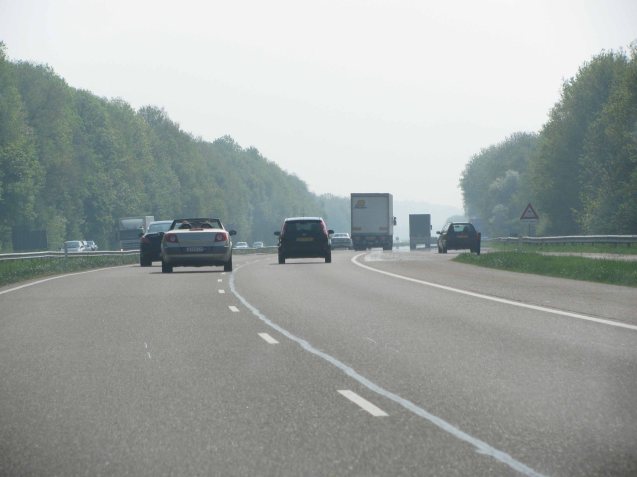 The Green Ribbon project (‘de Groene Loper’) will also fully integrate the A2 with the all-important east west A79 running via Aachen to Cologne (Köln). Quite apart from the leafy lifestyle, the objective advantage of Maastricht – and what makes it such a great first day destination – is that the major hub of the western European road network is the proverbial stone’s throw away. You can zoom practically anywhere from here (and we have). After rush hour A79 is typically very quiet, as well as super smooth, wide and lined with mature trees, a gentle way to get your bearings and settle in for the first proper day of motoring.

There’s no spectacular scenery on the run south from Cologne to Frankfurt, mainly over the low Westerwald mountain range on the right (east) side of the Rhine. There’s an occasional glimpse of the epic vistas that inspired all the songs: ‘Oh, you lovely Westerwald, Over your heights the wind whistles so cold, However, the smallest sunshine, Thrusts deep into the heart.’ The weather is always the issue around here.

There are as many routes south through this complicated web of major roads in central west Germany as there are trip planners (and satnavs). The alternative A61 Rhine Motorway via Koblenz and the Nurburgring is thirty miles shorter but busy while the A5 between Frankfurt and Darmstadt – the original Hitlerbahn – is the busiest road in the country.

Instead we’re on A3, the major cross country north west/ south east road that shadows the mediaeval trade route Via Publica from Brussels to Prague. These days the ICE intercity rail track between Cologne and Frankfurt runs alongside A3 where trains hit their maximum 190mph. 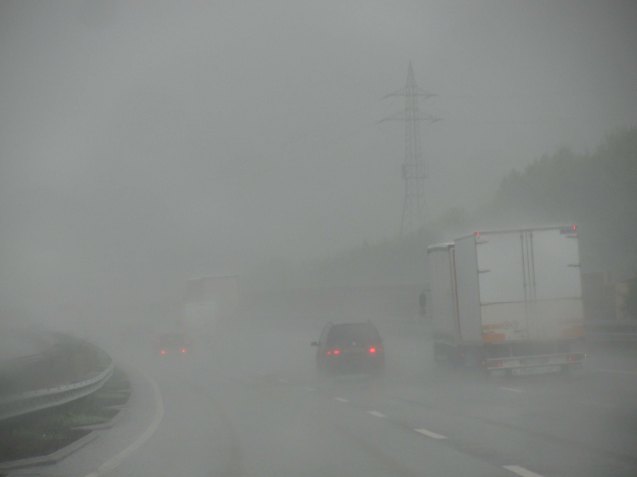 It was a beautifully warm, sunny day in Maastricht getting progressively more overcast until we hit the patch of ferocious rain tormenting central west Germany all Spring (and continuing to do so at the time of writing).

As well as respite from the nagging feeling you should be caning it on the long stretches of derestricted autobahn, heavy rain also cleans the windscreen.. 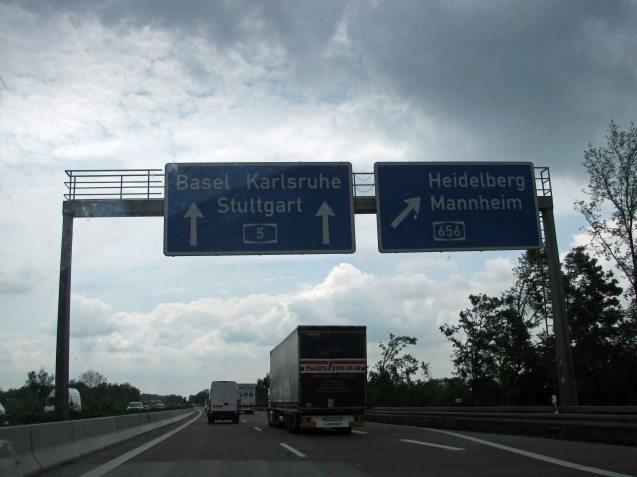 ..though it’s not long before it’s mucky again. Once over Westerwald (and its equally low lying neighbouring range Taunus) – and past Frankfurt – the weather improves considerably. We’re allowed on the famous A5, now the 480 mile HaFraBa, from Hamburg in the north via Frankfurt to Basel just over the Swiss border. After Karlsruhe it closely traces the French border past Strasbourg.

You might not always know it from A5 – it runs flat most of the time – but you are entering one of the most beautiful parts of Germany (though the Swiss have lassoed their border around the really amazing stuff further south). For the final 100 miles to Switzerland, A5 runs down the side of the famous Black Forest, peppered with historic towns, gorgeous scenery and – as we will see tomorrow – some great roads. 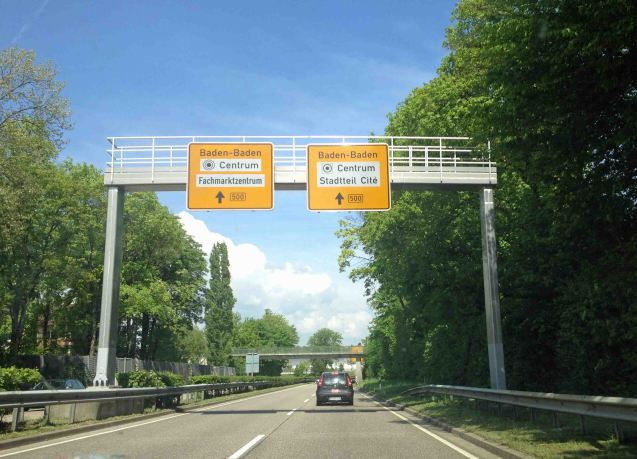 Just before three o’clock we arrive in Baden-Baden, just off the motorway, pretty much bang on schedule. There are a number of reasons for coming here: it’s very picturesque, set in heavily wooded hills. In the north west of the Black Forest, it’s the starting point for the well regarded Wine Routes. Last but not least it’s one of the few historic German cities that doesn’t have a Low Emission Zone (the requisite LEZ sticker is a slight pain to apply for and costs around €30). 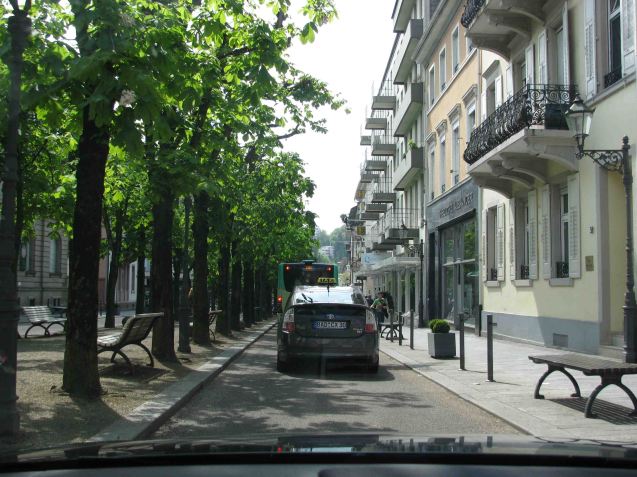 Baden-Baden might not have an LEZ but the road system is nevertheless deliberately complicated. The road into town from the north literally goes all around the houses, up out onto the hills in the east, while the through road in the city centre is closed during the day. There is however a clearly signposted ‘hotel route’ so you can check out all the accommodation. By far the quickest option is to call in at the Trinkhalle tourist office – in a huge former bath house right in the centre of town; you cannot miss it – where they can tell you what rooms are available and book them too (and a nice café for a drink while you decide, though parking is a faff).

The spectacular Hotel Bühlerhöhe where the English football team stayed for the 2006 World Cup – it was hitting the shops in Baden-Baden that earned Victoria Beckham and pals the title WAGS – is out of our price range (and anyway ten miles out of town). The Hotel Belle Epoque and Radisson Blu Badischer Hof, both in old mansion houses, are full so we ‘end up’ – poor choice of phrase – at Atlantic Parkhotel. It‘s right in the epicentre, a few seconds from the major sights, with a terrace beside the tinkling River Oos, across the road from an underground car park, with lovely views in every direction and it’s preternaturally clean. We feel like we’re getting some value for the otherwise steep €208. After leaving Maastricht at 10:15 by 17:24 it’s all done and dusted. Time for a swift kip before dinner.

Next: we get carried away on the Black Forest’s serious driving roads then dash down to southern Switzerland.