Our worst fears are realised, but we get by with a lot of help from the locals. 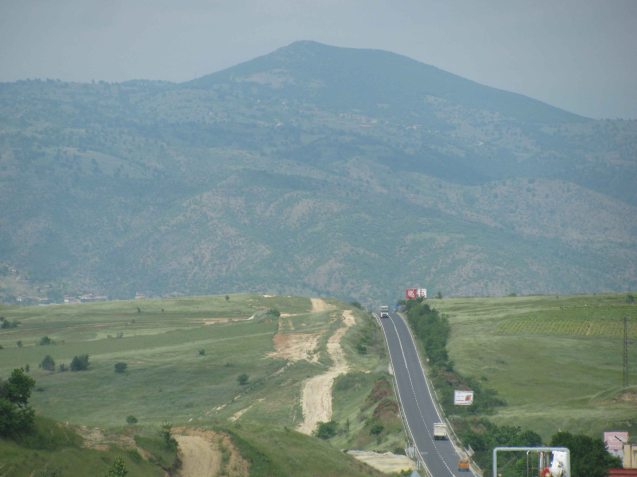 We’d been in Bulgaria about half an hour when the car behind suddenly steamed past then jammed on the brakes. We’re being car jacked! But around the next corner it was immediately apparent what the problem was: standing next to his regulation two-tone blue Opel Kadett, radar gun in hand, was a traffic policeman.

We should have taken even more note of this random act of kindness than we did. Later on we were not so lucky.

Eh?! Relax, most of the signs are in English too. The word at the top is ‘Sofia’.

It’s a moment we all dread. You know you’re pushing your luck but on a quiet stretch you think you will get away with it. Then a policeman steps out, arm outstretched and flags you down.

‘Dokument machina’. They went through all the paperwork carefully, checked the lights and tyres, asked where we were going (all in German) then took me over the road to their car. According to the digital read-out we were going significantly faster than the 90kph national speed limit (on single carriageway); according to a printed sheet I was shown that meant a significant fine.

I didn’t have any Bulgarian cash on me and took my wallet out to demonstrate, just €20. He turned to his colleague who shrugged then plucked the two €10 notes out and tucked them away so swiftly I couldn’t help but smile. A chopping motion showed we were all done, then he shook my hand and that was that. Needless to say we scrupulously observed the speed limit from then on. Unfortunately, it wasn’t the only lesson driven home during our 24 hours in Bulgaria.

Apart from a little navigation mishap just after the border… 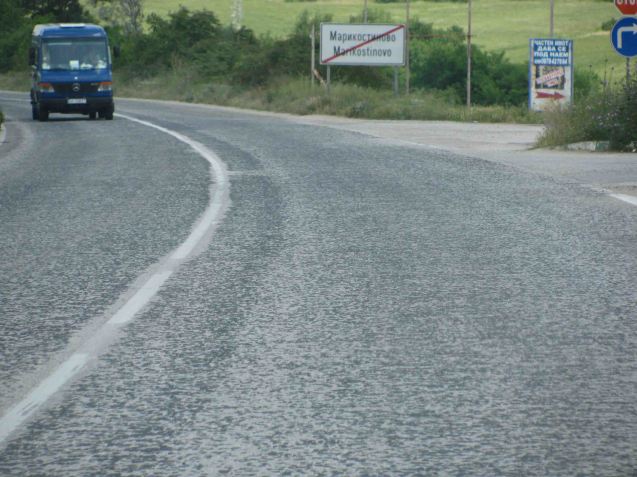 …the roads (motorway and main) were in decent nick. Except for one massive pothole. De facto we were too close to the car in front. The steering felt fine but we both knew we couldn’t possibly have got away with it, and so it proved. 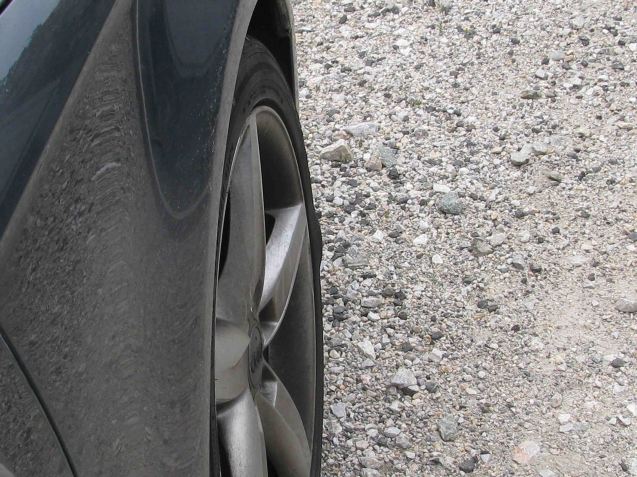 The unsightly bulge in the front nearside tyre would need professional assistance, the sooner the better.

This E79 is one of the most strategically important stretches of road in Europe. It’s now one of only three missing motorway links between western Europe and Greece. The Greeks are well advanced in upgrading their section. Meanwhile the Bulgarians’ plans are taking shape more steadily. 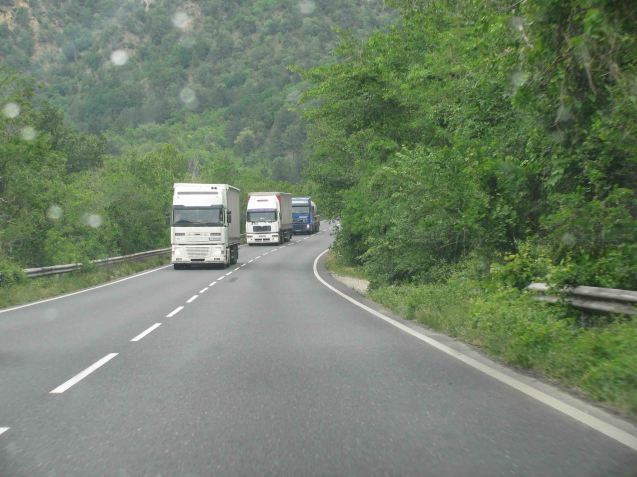 From south of Sofia, E79 is split into four Lots, not counting the already-open 10 mile section in the north which connects to the capital’s ring road. The two Lots south of there, and the southernmost, are all under construction. That leaves just Lot 3, the 40 mile part through the Kresna Gorge. This 12 mile long canyon between the Malashevska and Pirin mountain ranges presents as-yet-unsurmounted environmental and technical challenges.

(Those fond of spectacular natural features should also check out nearby Melnik with its 30 mile long massive ‘sand pyramids’.)

When the Struma Highway eventually opens – named after the river running through the gorge – the existing road will be a great drive.

Improvement works on E79 have been on-going for some time.

The new sections are well underway.

The finished part of Struma has some epic curves. 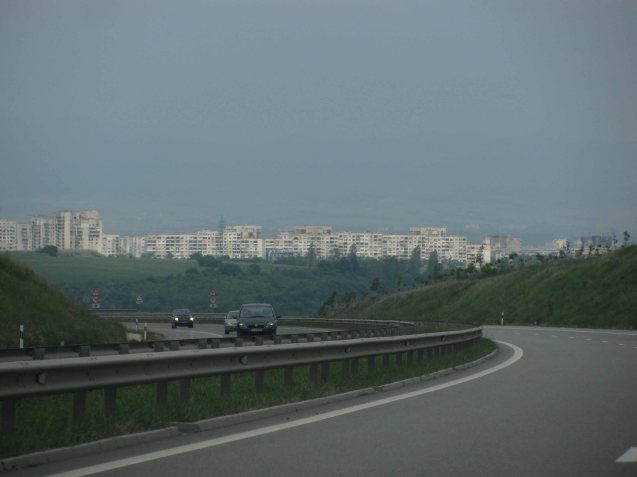 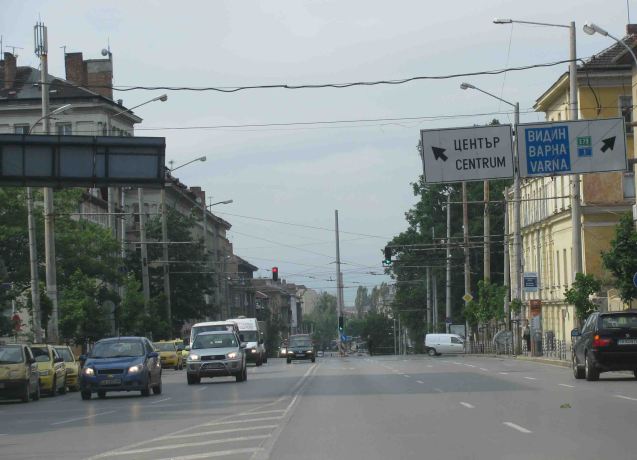 Don’t think we wake up in the morning desperate to drive into foreign capital cities to source tyres for our extravagantly-wheeled lifestyle estate car. But the great thing about these situations is that retreating into a corner and hoping somebody else will sort it out is not an option. The only choice is to do the thing in front of you.

Largo: former home of the Bulgarian Communist Party, now housing members of the National Assembly (centre); the President’s Office and Sheraton Balkan Hotel (right) and the TZUM department store (left). Built in the 1950s and now regarded as a prime example of Socialist Classicism architecture, aka Stalinist Gothic.

The strategy is to locate the official Audi dealership and throw ourselves on their mercy. We’ve come to rely on our in-car infotainment system. Despite being four years old it has taken us direct to some great hotels, for instance, but this time we end up at an address that clearly has never been an Audi dealer.

Sofia University: established ten years after the Liberation of Bulgaria, meaning the end of Ottoman rule after the Russo-Turkish War of 1877-78. Home to 21,000 students. Built in 1924.

Thank God for smartphones, but sort out the translation software before you desperately need it. The Audi Bulgaria website is not in English. Eventually we work out the dealer is on Slivnitsa Boulevard. Luckily it’s just up the road. 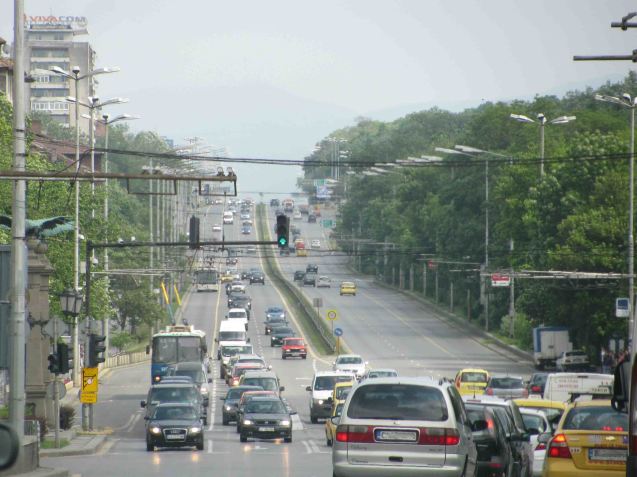 Central Sofia is laid out in a upright horseshoe shape, filled with an almost regular grid of streets. Slivnitsa Boulevard, running east-west across the north, connects the two ends.

On its way out of the city, Slivnitsa swings north west through the suburb Illinden – where we find the Audi garage – then continues, single carriageway, for the 35 miles to the border with Serbia. This is the second missing motorway link between western Europe and Greece. A tender has just been issued to upgrade the whole stretch. When it’s finished it will meet the Corridor XI road the Serbs are currently building from their second city Nis, the third and final missing link. Nis is already directly connected to Belgrade, Budapest, Vienna and on. No word yet on when this is likely to happen. XI should be ready by mid-2015. The new ‘Boulevard Bulgaria’ should only take two years to build but there’s no funding so far. 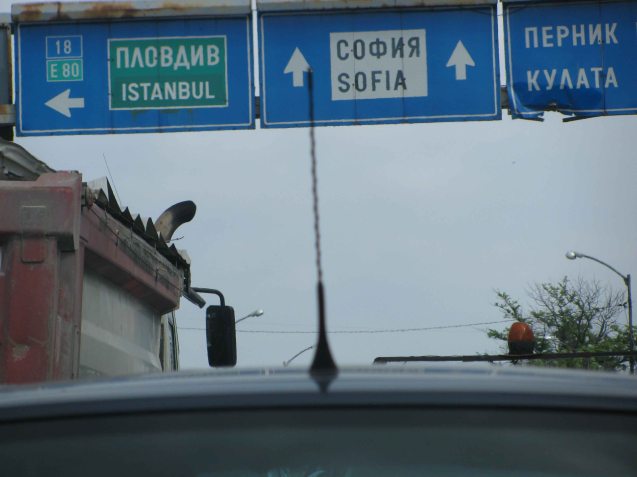 Our worst fears are realised. The Audi guy is really helpful and speaks very good English but the bottom line is, as we half expected, they don’t have our tyres in stock and it will take time to get hold of them.

Would we rather hole up in a Sofia hotel for three days while new tyres are flown out from Germany – and fitted by Audi-certified technicians – or would we like to try our luck at a tyre depot on a scruffy industrial park? It’s an apposite question. But news that this place is only round the corner, painted pink and called Diana is oddly reassuring.

Our luck turns: Would you believe they don’t try and sell us new tyres? First off, the chap in charge – who speaks perfect English – suggests they swap the tyres round to take the stress off the bulgy one. But with 1,500 miles to go we want to know how much new ones cost. A moment later he’s back with a printed price list. Twenty minutes after that we pull out of Diana wearing a brand new pair of Continental ContiSportContact 5s. They cost 806lev (€403), not cheap by any standards, but we were absolutely delighted with the service.

What now then? It’s after 17:30. The obvious thing to do is find a hotel and spend the evening exploring Sofia. Yeah! But that only puts us 190 miles from where we started this morning; with only four days left we need to make some more miles. The preferred destination is Ruse, on the Danube border with Romania, ideally placed for Bucharest tomorrow morning.

(Language tip: the third word down on the sign above – PYCE – is the Cyrillic version of Ruse. As those letters are all very common it’s a foothold, albeit a small one, on the alpahabet. Cyrillic ‘transliterates’ into Latin script, i.e. the words are spelt the same, just the letters are different. Easy. Now try it at 50mph).

Ruse is another 190 miles north east, only a quarter of which is on motorway. Before that we have to cross the Balkan Mountains – Stara Planina – that give this whole massive peninsula in south east Europe it’s name (the word Balkan derives from the Turkish for ‘chain of wooded mountains’).

Epic scenery. With more wildlife than you can shake a stick and scream at, and the highest waterfalls in the region, this is definitely somewhere we want to come back to. 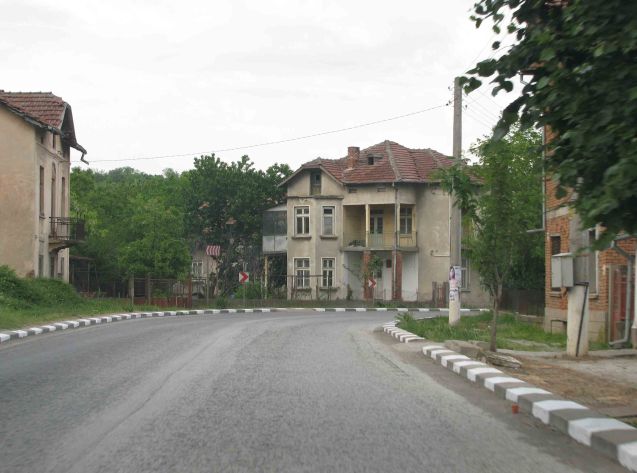 All too soon the Hemus Highway (hemus means mountain) turns east for the Black Sea resort Varna. We turn off onto route 3 heading north then east. Surprisingly, all the trip planners – and our satnav – avoid Veliko Tarnovo, Bulgaria’s oldest city. About halfway to Ruse it might have made a good alternative.

The white and grey painted kerbstones are a characteristic feature of Bulgarian towns. 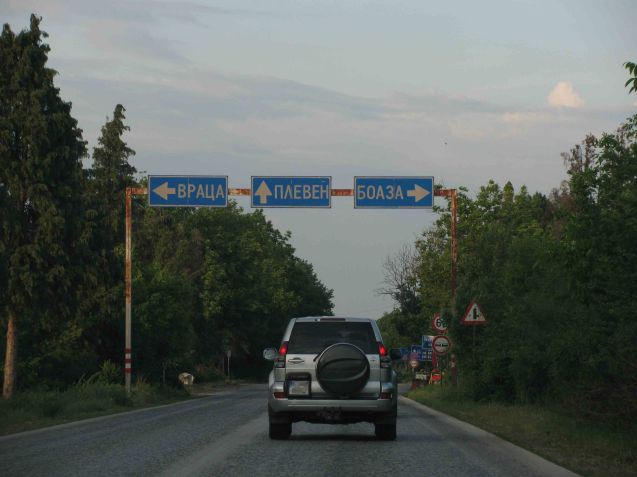 Equilibrium restored: It’s been a hell of a day but as the sun sets, and it looks like we will make it to Ruse, there’s a good atmosphere inside the cabin. If busting a tyre was a stupid error, so was leaving the passports in Arezzo. 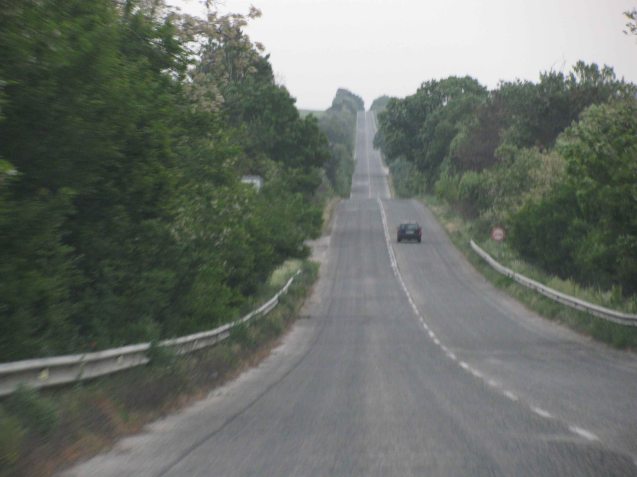 Once over the Balkans the countryside turns rolling, vast hedge-less fields beside the road. Of course it’s pitch black by the time we roll into Ruse. Hopes of rooting out a chic river view room, diminishing with every tick past 22:30, revive as we latch onto the signs for the Danube Plaza Hotel.

Okay it’s a bit dated but our luxury, double-balcony room is huge, looks out over the central square and only costs €66 B&B all in.

Next: Romania, ‘Tragedy’ on Transfagarasan.

2 thoughts on “Driving in Bulgaria: The Pothole and the Policemen”