Also, the Italian met service has issued extreme heat alerts for 14 cities as temperatures and humidity are forecast to soar.

Weather in brief – Thundery rain in western Europe but dry and sunny to the east.

From @Port_of_Dover this afternoon, ‘Here in Dover sea conditions in the Channel are slight with a West Sou Westerly light airs, force 1, and the visibility is moderate.’

Turkey – the situation remains uncertain after widespread demonstrations in recent weeks, particularly Istanbul and Ankara. Keep up to date with the latest official advice here.

Eurotunnel – “Resurfacing works will be taking place in the boarding lanes of the UK Terminal from 17 – 28 June. During this period, there will be no catering or toilet facilities available in this area. Please visit the Victor Hugo Terminal building after you have checked in to make full use of the facilities available there.”

Spain – a rabid dog was caught and destroyed in Toledo at the weekend, the first incidence of rabies in the country since 1978. Click for the official advice.

The Channel – Channel Islands, UK & France operator Condor Ferries is set to resume sailings from Weymouth on Wednesday 17 July. Sailings were moved from the port, the closest to the Channel Islands, in February 2012 after structural problems with the berth but repairs are now almost complete, though the work hasn’t been easy according to ferryonline.co.uk.

Hungary – the eToll system of electronic tolls for trucks – now rechristened HU-GO – mired in controversy after the firm selected to build and operate the system pulled out – will go ahead as planned from 1 July. The system is mandatory for vehicles over 3.5t and varies depending on the number of axles. The government is expecting – indeed relying on – ‘a significant increase in revenues from international transit traffic’. Drivers can pay either via an on-board electronic device or by pre-paid ticket. A dedicated portal www.hu-go.hu should open from 20 June. The system was expected to be optional for car drivers though there is no word on that yet. All drivers need to buy an eVignette to drive on Hungarian motorways, available from garages, border points, etc. Tickets are daily, weekly (10 days) or monthly. Daily tickets for cars are 3,375HUF (£9.90); weekly 8,255HUF (£24.90). For the full price list click here.

Serbian President Tomislav Nikolic is fronting a road safety campaign from the back seat of his official limo. The film is aimed at improving seatbelt use in the country. 58% wear belts in the front but only 3% do so in the rear. Click the link above for the vid.

Norway – motoring programme Autofil tested a fully-loaded US-spec Tesla Model S in wintery conditions to assess its cold weather abilities, no holds barred, on a 270km drive from Oslo to Geilo (a climb of 800m). See the subtitled video here.

Poland – Ambassadors from six EU countries have clubbed together to demand apparently outstanding payments due from completed road building projects according to Reuters and local reports. Companies from Ireland, the Netherlands, Portugal, France, Austria and Germany say they are owed an ‘unusual and unprecedented’ £2bn and that the country’s reputation is being damaged as a result. The Polish roads ministry GDDKiA disputes the account saying works have not been completed to the required standard.

Comment: until it can be proved beyond doubt that the money is owed as described we are 100% behind the Poles on this one. We hear about lots of disputes between construction companies and national authorities over the standard of works complete or broken promises, the latest in Romania. Perhaps UK companies will shrug at this seeming confirmation of all stereotypes about doing business in former Soviet-bloc countries. We say: this is a huge opportunity for British companies, seemingly the only country not included on this sad roll-call. For advice on doing business in the region look no further than Lord Browne’s interview with the BBC’s HARDtalk on 30 April 2013, on ‘Putin’s Russia’: ‘Provided that you were doing things which were clear and simple and for the benefit of Russia, and your own benefit, and you never changed strategy you could get things done.’ Despite the subsequent controversy over BP-TNK, BP in fact made six times its original investment on the deal. 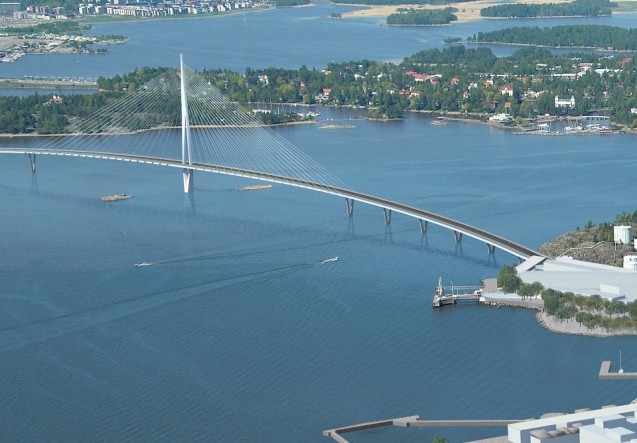 Finnish-British civil architects WSP Finland has won a design competition for a 3km landmark road/tram/pedestrian bridge linking eastern island suburb Laajasalo with the centre of Helsinki. The proposed structure won plaudits for its ‘light and airy’ design. Construction should start in 2018 all being well. The company recently won an award for its Crusell Bridge in the west of the city. WSP operates worldwide, including Poland and Romania. Brave!

Sweden – newly married Princess Madeleine was collared for driving her black Volvo in a Stockholm bus lane shortly before the wedding earlier this month. The will-they-won’t-they-can-they-can’t-they flip flopping over whether she should pay the £100 fine is causing some controversy..

Forty eight Rolls Royce Silver Ghosts, including one of the modern incarnation, have set off on the recreation of the 1913 Alpine Trial. Currently in Austria, having already tackled the 27% Katschberg Pass, the cars will no proceed to Italy and Slovenia. Keep up to date with the action via the links above.

Russia – a tweet from @AGRE_RoadSafety this morning (via @edijk_nl) says: ‘The road safety efforts in Russia have brought results: 5 months statistics demonstrate 7,9% deaths decrease compare to the same period 2012.’

An in-depth report from The Moscow Times says tolls will become the norm on roads in the region, including the new M11 to St Petersburg. Click here for the map of road building in the area.

Belarus – a decree signed by President Lukashenko on 13 June allows for tolls on the country’s highways to be paid by fuel card, including in Belorussian or Russian roubles, US dollars or euros for foreign-owned vehicles. Click for the full statement.