Terrifying in every way: Poenari Fortress and Transfagarasan, Romania.

They really did have some awful ways of doing away with each other in the Middle Ages.

Legendary even in his own life time for his brutality was Vlad Tepes, aka Vlad The Impaler, aka Count Dracula.

Impaling – basically shoving a stake up someone’s bum until it comes out of their mouth, leaving them hanging there, sometimes for days, until they died – seems almost benign compared to what happened to the bodies afterwards.

Thousands of stakes, bodies still attached, were arranged at strategic locations. At least one Ottoman army turned on its heels and fled after confronting a ‘forest of corpses’.

Really, Bram Stoker put a glossy spin on half of what really went on. 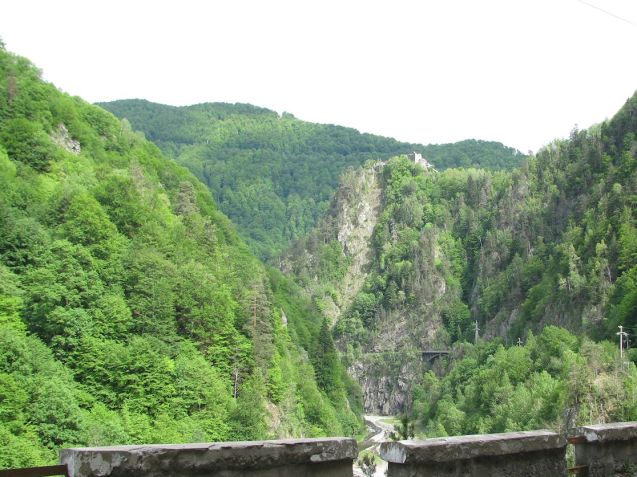 The ruins of Poenari Fortress.

Central Romania is littered with spooky castles all making a claim on the Dracula legacy. He moved around so much they might all be true but one place where Vlad definitely lived is the Poenari Fortress near Arefu.

It’s just off the DN7C Transfagarasan that runs north south between Sibiu and Pitesti, the dictator Ceausescu’s show road built in the 1970s and star of a famous Top Gear programme.

Actually it’s not in Transylvania but Wallachia, the mainly flat region of southern Romania that includes the foothills of the Fagaras Mountains, part of the Southern Carpathians.

Poenari lies in ruins now, not because of a battle but because a huge landslide in 1888 that swept half of the castle over the cliff and down into the Arges River 1,000 feet below.

There’s a well signposted car park for the Fortress, just west of Transfagarasan on the southern approach though you have to climb 1,480 steps to get to the ruins themselves.

We didn’t stop because we wouldn’t have been able to start off again. We were scared out of our wits. Not because we were completely on our own, or because of the dense, dense forest that made the place deathly quiet even over the straining of the engine as we climbed higher and higher.

Not because of the sudden, fresh piles of rocks lying in the road, or the hundreds of rotting logs floating in Lake Vidraru nearby. Or the long cold dark tunnels with water dripping down from the rough hewn ceilings.

The thing we really couldn’t bear was that round every corner all we could see was the concrete road, cracked and flaking, forty years old, attached side-on to the mountainside, barely supported, and so narrow we knew we couldn’t turn around.

Transfagarasan: a technical marvel in its day.

For more on our adventures in Romania click here.