NORTHERN IRELAND. Vehicle checkpoints will return to Belfast in the run up to Christmas after a car was hijacked, packed with 130lb of explosives and driven to a shopping centre on Monday. The device failed to detonate but police say there will be ‘a very visible presence, in key locations at key times’ though a ring-of-steel style cordon has been ruled out. 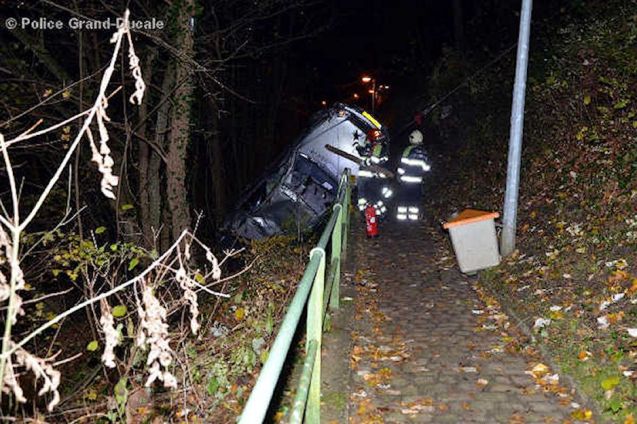 A lucky taxi driver survived a 60 foot drop off the side of Cote d’Eich in Luxembourg last night with only cuts and bruises. Cote d’Eich, R7, is the main road to the city centre from the north, along the picturesque but very steep sided Alzette Valley. The driver apparently lost control before smashing through the barrier and barrel-rolling several times down the sharp incline.

With a $10bn Chinese infrastructure fund set aside to invest in the Balkans, and deals already done on new roads in Montenegro and Macedonia, meetings are being held to allocate the rest.

Chinese prime minister Li Kequiang is attending the Heads of State of Central and Eastern Europe (CEE) summit in Bucharest this week.

Top of Serbia’s wish list is a substantial stretch of the Belgrade-South Adriatic highway (from Obrenovac to Ljig), sections of which are already being built by Chinese companies.

In Bulgaria, Chinese investors have already expressed an interest in building a tunnel under the Petrohan Pass, the shortest route across the north west of country between Sofia and the border with Romania.

There is also talk of involvement in the already-under-construction Shipka Pass tunnel in the centre of the Bulgaria, to help complete the north-south axis from Bucharest to Alexandropoulis on the Aegean Sea.

Most exciting however is the Black Sea Ring, a 7,000km road around the Black Sea, connecting twelve countries plus off shoots to Albania, Serbia and Azerbaijan. Plans are currently at the feasibility study stage though building on the section through Bulgaria, between Varna and Burgas, could start in 2016 with help from the Chinese.

Meanwhile, Romania is expected to get the nod from both the European Investment Bank (EIB) and the European Bank for Reconstruction and Development (ERBD) to build the first trans-Carpathian motorway, between Comarnic and Brasov.

With major technical challenges still to overcome, the 58km, €1.3bn road is likely to open in 2017.

Finally, Bulgarian and Romanian authorities have started formal negotiations on the next Danube Bridge, one of three under discussion. The crossing between Silistra and Calarasi, to the east of Bucharest, will be built under Private-Public Partnership with a Romanian company said to be already in the running.

Desperado: the final Lamborghini Gallardo rolls off the production line – a LP570-4 Spyder Performante in Rosso Mars – at the factory in Sant Agata, Italy, yesterday. Almost half the Lamborghinis ever built have been Gallardos.

roundup: FRANCE. French News Online takes an out-of-season drive down the ‘remarkable’ D907 Gorges du Tarn in southern France, just off the A75 north of the Millau Viaduct. CYPRUS. The respective authorities are in talks with the European Commission about re-establishing a ferry route between Greece and Cyprus according to local reports. Surprisingly, a car ferry link has not been available for many years. Read the Daily Telegraph’s summation of current seaborne services. NETHERLANDS. From 1 January 2014, the two-part vehicle registration paper document will be replaced by a single credit card-sized smart card. BELARUS. The Chernigovets open cast coal mine in southern Siberia has taken delivery of the first of the OAO BelAZ 75710 monster dumper trucks. With a payload of 450 tonnes the 75710 is the word’s biggest truck and built strictly to order. Chernigovets has bought three though 75710s are expected to also see service in established OAO BelAZ markets in the southern hemisphere like Australia and New Zealand.