Drivers’ rights groups in Ukraine meet with the British Ambassador as they face a crack down. Tesla’s network of free supercharging stations comes on stream in time for the winter holidays while the Winter Raid enjoys snow in the old fashioned way. The Mayor of Burgos relents on his plans for the city’s main thoroughfare after sustained, and violent, protest. 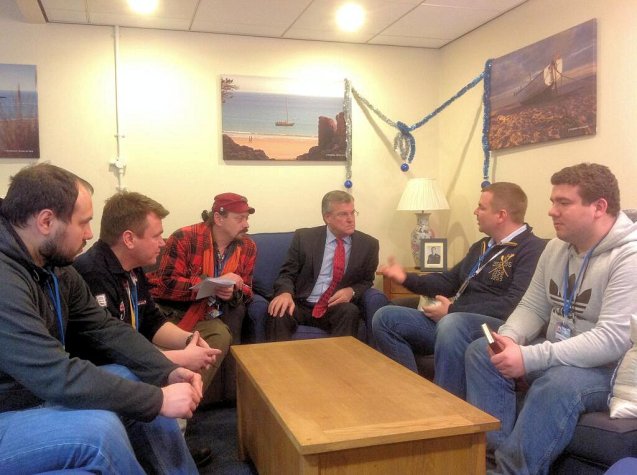 The British Ambassador to Ukraine has met with members of the Automaidan drivers’ group he said today.

Automaidan has been at the forefront of the anti-government (pro-EU) movement, as have other drivers’ groups in the former Soviet Union (see here).

Automaidan members continue to come under pressure from the authorities. Reportedly, more than 900 drivers involved in recent pickets of President Yanukovych’s country house have had their licences withdrawn while one of the group’s leaders has had his assets frozen over non-payment of a two year old traffic violation.

Andriy Dzyndzya, a high profile member of Road Control, part of Automaidan – controversially imprisoned after being convicted of driving a bulldozer at riot police in the early days of the pro-EU protests in Kiev – now faces new charges over an incident early last year.

According to local reports, Dzyndzya spat so hard at a traffic officer the man was left with ‘a bruise’.

The leader of Road Control Rostislav Shapozhnikov, who fled to Poland before Christmas apparently in fear of his life, has not been heard of since according to a contact in Kiev.

update 16.01.14: a raft of new laws, presented, voted on and passed in 81 seconds today, includes – among many other anti-dissent measures – a ban on more than five cars in convoy.

Just in time for the winter holidays, a usable network of Tesla Superchargers takes shape in Europe.

In addition to the six already installed in Norway, there are now two in the Netherlands, four in Germany and one each in Switzerland and Austria.

The latest came on stream at Oosterhout on the A27 in the Netherlands yesterday.

Owners can 50% charge their Model S in 20 minutes – or 80% in 40 minutes – for free. Each station is located on a major route and they all have eight charge points. See www.teslamotors.com/superchargers for more.

Apart from a recent spate of fires – both vehicles and at-home charge points – it’s been almost non-stop good news at Tesla recently. The important stuff anyway.

The company revealed at the Detroit Motor Show this week it sold around 1,000 more Model S than expected in the fourth quarter 2013 (full year sales were 22,400). The shares immediately shot up 16% adding $2.7bn to the firm’s market capitalisation, or $2.7m per vehicle sold reports the Detroit News.

Tesla has been expected to show a production version of its upcoming all-electric Model X SUV in Detroit. ‘It will be here at some point,’ said an executive yesterday.

Winter Raid: a select field takes to the intentionally snowy roads of Graubünden, the Dolomites and Carinithia for three days of high-altitude press on motoring. Nearly sixty cars – from a 1934 Lagonda M35 Le Mans Rapide to a 1983 Mercedes G-Puch 280GE – compete in a succession of time trials and tests. To judge by the video at www.raid.ch the motors are really put through their paces. It’s not cheap at 4400CHF per couple but that’s all-in including a night at the Kempinski in St Moritz and two nights at the Miramonti Magestic in Cortina d’Ampezzo (where James Bond stayed in For Your Eyes Only).

roundup: SPAIN. After five days of riots and 40 arrests, the mayor of Burgos has called a temporary halt to the redevelopment of the city’s main thoroughfare Calle Vitoria. The €8m plan included removing one lane of traffic and replacing free parking spaces with an underground car park.