ROADS: Snow on motorways south Switzerland, south Austria and north east Italy (Lazio Rome region has declared state of emergency, there is a high risk of avalanche/landslip in north east Italy and Catanzaro seafront has been shut due to violent seas). Massif Central France, snow on verges but roads clear.

North Serbia – also badly hit by snow, truck ban from Hungary and Romania – and Finland, plus latest from Kefalonia, Greece.

Stuff the murder(s), what about the car? 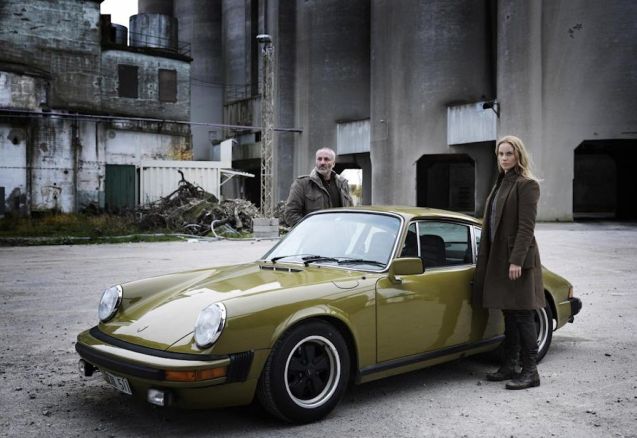 Even though we haven’t seen The Bridge – two seasons of The Killing, all three kinds of Wallander, Borgen, and the books and films of Girl with the Dragon Tattoo were enough for us – it hasn’t escaped our attention that the star drives an olive green Porsche 911 (we did catch the bit where she points her Sig Sauer P228 through the windscreen to jog the memory of a traumatised shooting victim sat inside).

As a treat to mark the series finale last night, Porsche Origin has tracked down the provenance of a car that has fascinated so many.

Originally exported to the US it was spotted on sale in San Francisco by the test editor of Teknikens Varld magazine and brought back to Sweden in 2010.

From there it swiftly made its way to the production company that made The Bridge and onto our TV screens. Diehard fans – i.e. anybody reading to the end of this story – need to know the actual car is on display at the Nordicana Festival in London, ending today.