Dispute ongoing until at least early next week. 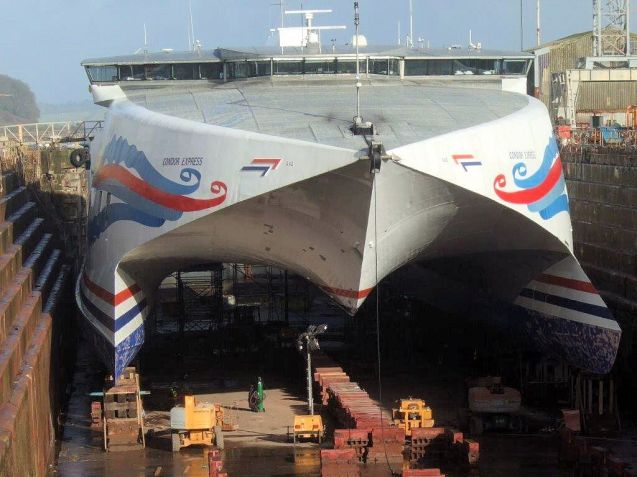 Laid up: Condor Express’ sister ship Rapide is laid up in St Malo with no prospect of movement until at least early next week.

There seems to be no end in sight to the strike by Condor Ferries staff in St Malo.

All sailings to and from the French port have been suspended since last Thursday. Yesterday Condor cancelled all services to and from St Malo until Monday.

Asked if there was any prospect of a solution Condor chief executive James Fulford told @DriveEurope last night, ‘We are always hopeful but these guys minimum demand would bankrupt our company. We’re hoping they’ll see this and go for our offer.’

This was after he tweeted on Sunday, ‘Joined my colleague on board Condor Rapide yesterday and will be here for a while! Great talks with the guys and we tabled a formal proposition addressing almost all their concerns. Problem is that their external (non-Condor) spokesperson is refusing to even acknowledge our proposition let alone reply to it – pity! #respect.’

According to the BBC, the workers, members of the ITF International Transport Workers Federation, are protesting ‘because they want the same rights as their counterparts on the mainland, such as social security benefits.’

The Maritime spokesman for the ITF was not available for comment this morning.

Subsequent remarks from James Fulford via Twitter: [there is] lots of false data on strikers’ pay – publicly available facts are they earn from €17.7k for the lowest paid (Cat3Seaman) to €30.5k for the bosun. The majority are in the mid €20ks. In addition whilst certainly a tough and skilful job:

Gin Palace: two days after BMW revealed laser diode headlights that can throw beams over half a mile up the road, Mercedes Benz goes one step further: Swarovski crystals. Yep. The front lighting system on its massive new S-class coupe includes 47 Swarovski crystals, 17 in the ‘flare shaped’ DRLs and another 30 in the indicators. We take headlamp technology quite seriously at @DriveEurope since discovering xenon lights could switch for driving on the other side of the road so no need to fiddle about with stickers. But is it not all getting a bit silly now?