The wildly successful Dacia factory is under threat if a new motorway is not built soon. Fuel’s up in Portugal, a hefty fine for Dover overloading, more underage driving, toll road misery Spain, Gibraltar border go-slow, Moscow solves its pothole problem and more revelations from the ADAC.

The Romanian president Traian Basescu is no friend of the prime minister Victor Ponta.

Most recently the president refused to sign into law Ponta’s plan to raise fuel duty, one in a long line of public spats.

Now Basescu is lighting another fire under the government by claiming Romania’s prize industrial asset is at risk if the long-planned motorway across the Carpathian mountains is not built as a priority.

In remarks last week to a local TV station, Basescu said, ‘It is sure Dacia will lose the assembly line in Pitesti because at Tangier, in Morocco, there are already takeover capacities.

‘In Tangier, the cars are placed directly in the ship because the port is at just a few kilometers from the factory, not like in Romania where the Government prioritizes the highway section Bucharest-Alexandria instead of Pitesti-Sibiu.’

Dacia built 430,000 vehicles last year at its factory near Pitesti, just to the south of the Carpathians. The company has been a runaway sales success for parent company Renault and is said to account for around 8% of Romania’s total exports.

The vast majority of Dacia cars are sent abroad, mainly through the Black Sea port of Constanta which is now linked by motorway to Pitesti via Bucharest.

Heading north, to Western Europe, is much more difficult. Sections of motorway to the Hungarian border in the west are well underway with the entire stretch expected to be ready in summer 2016.

The road across the mountains however, between Pitesti and Sibiu, is still on the drawing board with an earliest finish date of 2020. Last year the government controversially decided to prioritise not just the Bucharest-Alexandria road in the south west but also the Brasov-Comarnic motorway in the east.

roundup: DOVER. A driver has been fined £300 on-the-spot and the vehicle prohibited after being found 28% overweight says @KentPoliceRoads. PORTUGAL. Petrol has edged up two cents per litre this morning to €1.55. Diesel is unchanged at €1.35. MOSCOW. Potholes have been reduced tenfold in the past three years says Mayor Sobyanin (since he was in power) with 27 million square meters of road replaced in 2013. ADAC. The order of the top cars, not just the votes, were manipulated in the annual ‘Yellow Angel’ car of the year award says the motoring organisation in its latest confessional. The second placed Audi A6, for instance, was bumped down two places in 2012. CYPRUS. Further to the run away Norwegian kid last week, a Cypriot man has been arrested for letting his 8 year old daughter drive his car. GIBRALTAR. Queue watch. Go slow today rather than all out delays: @RGPolice reports in the half hour to 16:00, twelve cars crossed into Spain. SPAIN. Drivers using toll roads have dropped by a third since 2006 even as the network has expanded from 1,723km to 2,568km says the Ministry of Development. The govt could bail out troubled operators in exchange for an 80% shareholding. 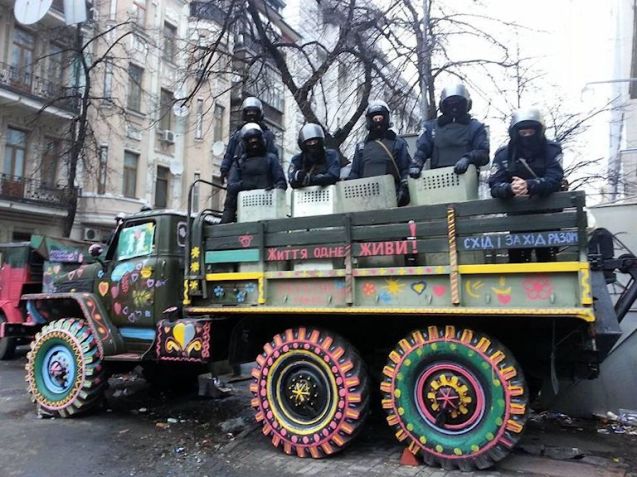 Kyiv, end in sight? Some streets have been cleared or partially cleared, including Hrushevskoho Street, scene of the most bitter confrontation recently (above). Protestors have left the city hall building and 234 have been released by the authorities under an amnesty. Meanwhile however, an Automaidan activist in Zaporizhzhya in south east Ukraine was killed at the weekend after an unknown assailant fired into the petrol tank. Most of all, protestors are keen to refute accusations that their movement is made up of (right wing) extremists. Photo via @EuromaidanPR