NEWS: Eurotunnel advises passengers to postpone journeys today as tech trouble strikes. Dover ferry operators earlier warned of a busy day ahead, and for passengers to leave plenty of time to check-in, but Port of Dover subsequently says it is ‘working to maximise capacity today’. See more here. Meanwhile, passengers are advised to use the M2 and A2 roads to Dover to avoid building queues at the Eurotunnel turnoff on the M20, and at the A20/M20 Aycliffe roundabout in Dover.

TODAY: how much does it cost to cross the Channel at the last minute? After last week’s trip we have some fresh figures. Plus, coming up, Madrid introduces higher parking fees for ‘gas guzzling’ cars, Dutch truckers hold more motorway protests and Transfagarasan opens for the summer.

LAST MINUTE CHANNEL CROSSINGS: HOW MUCH?

‘All services are on schedule with space available’ is the best phrase in cross-Channel travel, but how much does it cost to just chuck your stuff in the car when the sun shines and set off?

After many ad hoc trips, including a couple last week, we provide some up-to-date figures.

A good day to cross the Channel? Not too bad as it turns out.

The idea is always to roll out of bed when we wake up – whenever that might be – chuck the stuff in the car and set off for the Channel when we feel like it.

It’s so uncivilised to start a holiday by getting up in the early hours, and/or working to – somebody else’s – unbending timetable; tiring and stressful from the off.

But with an industry which lives by the tedious mantra ‘the earlier you book the cheaper the fares!’ this last minute approach is clearly going to cost, and not just for decadent slobs like us but also for anybody who just fancies a few days away when the sun shines. But how much?

Another of our traditions is the Olympic breakfast on board one of the Dover-Calais ferries. However, what with one thing and another last week, if we were going to enjoy the lazy afternoon’s motoring through eastern Belgium and northern Luxembourg we’d been looking forward to, it would have to be Eurotunnel this time.

Having been clobbered with a £159 one-way fare for a similar trip in April we took the unusual step, for us, of booking – or attempting to book – ahead. The fare was still £159. Ouch!

Still, at least it’s honestly outrageous. Book to travel on the day of departure with our monopoly undersea operator and it costs the same whether you just turn up at the check in booth unannounced, or scrabble with a smartphone in the car on the way down. Weirdly, that’s reassuring.

Coming back we had the luxury of more time and could afford to catch the ferry. DFDS kindly forwarded its brand new YourShipMate app which very handily cobbles together all the useful info on its services, from the port locations to check in times and timetables plus a booking facility. It also lists the departures in order so you can easily mix and match between the nearby Dover-Calais or Dunkirk routes.

Speeding up the A31 from Dijon we were quoted £86 from Calais which compares well to the £115 we paid after turning up at Dunkirk last May (in our experience it is cheaper to book ferries ahead, even on the same day). Unfortunately we couldn’t make the DFDS boat so it was all hands on deck to catch the 16:05 P&O Calais sailing.

It wasn’t a huge shock then to be charged £115, to the point we decided to treat ourselves to the Club Class upgrade for an all-in price of £137. Thank God we did. Normally we travel just out of season so were completely unprepared for the ‘carnage’ – in the words of the Club Class steward – downstairs. It was all fairly good natured but the poor women in the duty free shop stood with their backs to the displays and arms splayed as the flip-flopped hordes came at them in waves.

As it was we sat in a quiet lounge, on Mies van der Rohe tan leather Barcelona chairs – if real at €7k a pop – reading the complimentary papers and drinking the complimentary drinks, eating made-to-order, waitress-served BLTs for a fiver, feeling lucky to be on board at all. 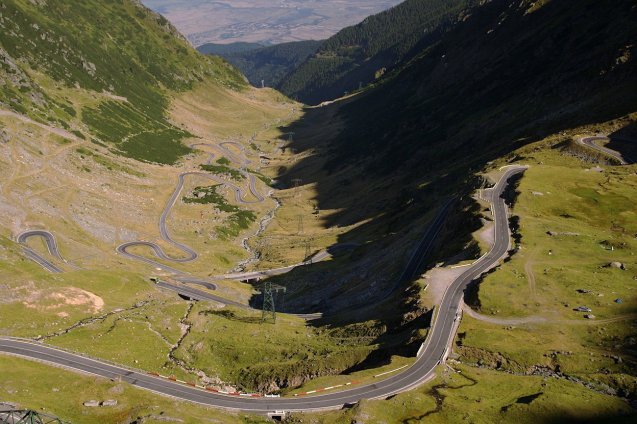 News catch up: Romania’s premier high altitude road DN7C Transfagarasan opened last Monday (1 July) for the summer and will not close this year until 31 October says Romania-insider.com. DN7C runs from Curtea de Arges to near Sibiu in central Romania. The section at the top however shuts overnight, from 21:00-07:00. Photo via Wikipedia.