Central Europe continues to suffer extreme weather – south west Germany is under red alert for heavy rain until Tuesday evening while a flash storm is set to hit Italy.

GIBRALTAR FRONTIER WATCH: delays built up to 2h30 at 16:15 local time before settling down. 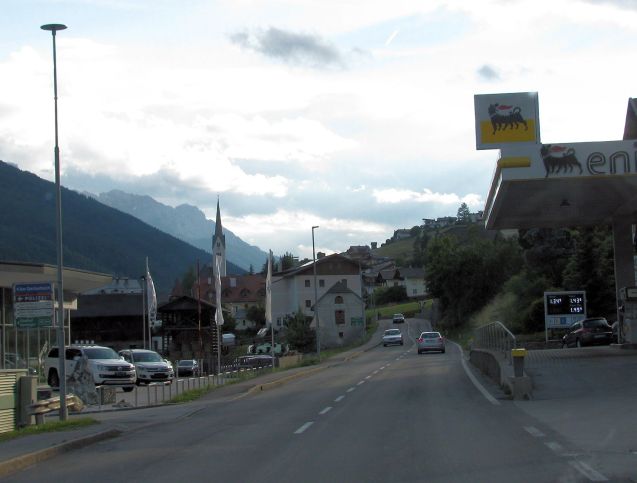 Fuel in Austria is notably cheap but the price can vary considerably. As well as this random filling station photographed at Sillian on the Italian border on 26 June – €1.349/l diesel, €1.436 unleaded 95 (click photo to enlarge) – the price we paid for standard diesel that week ranged from €1.364 to €1.499. The most expensive was on the S16 expressway at Bludenz.

The success of fuel price regulation in Austria may see the model adopted across the rest of the Continent.

Since 2011, Austrian retailers have only been allowed to change prices once a day and all changes must be notified.

The Commission says it, ‘plans to promote this best practice among Member States in the coming period, as it has been shown to bring significant benefits to consumers.’

Vehicle fuels is the second most poorly performing market among the 21 surveyed says the report which also estimates drivers take an €11bn hit due to poor treatment at the hands of fuel companies.

This new approach has found some support in the UK. AA president Edmund King says, ‘Many drivers may actually welcome this bit of EU ‘nannying’ as a way to get a fair price at the pump.’

Keep up to date with daily fuel prices via Fuel Prices Europe.

Porsche sent eleven cars from its Stuttgart museum to compete in this year’s Ennstal Classic, last weekend. The regularity test (timed, average speed stages) bills itself as ‘driving like 50 years ago’, for cars built before 31.12.72. It’s based in the Alp’s Tauren range in central Austria, starting and finishing each day in Grobming in the Enns Valley. The organisers are tight with the precise route, as ever, but the day one 400km Geolyth-Prologue heads south to take in the high Nockalm Road and Red Bull Ring (and probably the Katschberg Pass too). Meanwhile, the 500km 12-hour day two Marathon stage heads north, interestingly to Lunz am See in the mountains west of Vienna. This is way past all the usual blue riband mountain passes, the most easterly of which is Triebener Tauern near Liezen. We wonder what is so interesting out there??

roundup: SPAIN. Watch out in Madrid. Emergency vehicle’s so-called ‘silent sirens’- used to combat noise pollution – are blamed for causing a crash between a police car and private car. The sirens cannot be heard with the windows up and radio on says thelocal.es. PETS ABROAD. The number of pets carried by Brittany Ferries has grown by 25% since the pet passport regulations were changed in 2012, to 55,000 last year. It’s no longer unusual to take your pet to the Continent says the western channel UK-France-Spain operator. See BF’s pet friendly page here, including inclusive pet friendly accommodation on the boat and in Spain, France and Portugal. Meanwhile however, a dog carried on the Dover-Calais route died apparently from heat exposure last Friday. Regulations common to all three short crossing carriers say pets must be kept inside vehicles for the journey. The resulting petition has reported gained 5,000 signatures. It is not an isolated incident claim the organisers. GREAT ROADS tour organiser Ultimate Drives recommends the ‘picture perfect’ Route de Gentelly, the M2/D2 starting from Vence just west of Nice in the South of France. ITALY. ‘Qualcosa non va con i freni!’ means ‘there’s something wrong with the brakes!’ according to Italy magazine. See more handy car and driving related phrases here. CONDOR FERRIES. Following the grounding incident en-route to Guernsey last Wednesday, it has now announced repairs to the Commodore Clipper are more ‘complex’ than thought originally and the ship will now be out of action until 26 August. The company says it can accommodate all passengers with extra sailings on its high speed sailings, plus a new freight charter, details to be announced. Read the full statement here.