TODAY: the new ferry between the UK and Denmark kicks off with a tempting special offer. Plus, What To Do In Denmark. Meanwhile, another proposed ferry route surprises with a high-profile sponsorship deal.

Plus, Maserati sets off on an intercontinental road trip. Germany to take action on wrong-way drivers. Kerch ferry queue turns deadly. 1,000 trucks are turned back at the Russian border, and massive queues build up at some Serbian border crossings, and one in Bosnia.

Four+car and cabin £199 each way. Operator confident of Easter 2015 start.

What to do in Denmark: it might not be the most obvious holiday destination – almost totally flat, battered by British weather – but there’s more to Denmark than Copenhagen and sleek, modern design. Little kids love Legoland in south central Jutland, the mainland at the top of Germany. Nearby Ribe, the country’s oldest town, is well worth a look. The best holiday spot is northern Jutland, separated from the rest by the vast Limfjorden. The coast is lined with shifting sand dunes and dotted with cozy cottages. You almost will stormy weather to snuggle up and indulge in the national pastime, Hygge – the candle-lit, strong booze and nibbles-fuelled family and friends social time, ‘enjoying the good things in life with good people around you.’ Ferries can take you from there to either Sweden or Norway.

The prices of the new UK-Denmark Regina Line ferry crossing already look very reasonable but the introductory offer is likely to whet appetites even further.

Four people can cross for £199 each way, including (inside) cabin and car. An outside cabin is €40 extra.

These prices contrast nicely with the £334 @DriveEurope paid – one way, two+car, in an outside cabin, albeit booked two days before – on the DFDS boat back from Denmark in April.

Until a definitive start date is announced, potential customers must remain cautious. However, a spokesman for Regna Line confidently tells @DriveEurope that ‘We are starting the sailings between Harwich and Esbjerg at Easter 2015.’

However, he did not confirm the ship is the former MS Regina Baltica as previously operated by Tallink in the Baltic, as previously reported.

Regina Line aims to operate three round trips per week between Harwich and Esbjerg on Denmark’s west coast. Either way, the ship departs at 18:00 and arrives at 13:00 the next day.

For more information, or to register interest, see ReginaLine.dk.

The UK will lose its last remaining ferry link to Scandinavia at the end of September when DFDS closes its service between Harwich and Esbjerg.

Meanwhile, Euroferries refuses to go away. The on/off fast ferry between Ramsgate and Boulogne – crossing time 1h15, prices from £49 – has been announced so many times nobody now really takes it seriously. However, a new ‘five year, six figure’ shirt sponsorship deal with Millwall Football Club, signed in July, has raised eyebrows. The company also aims to operate a scheduled coach service between Ramsgate/Canterbury and London. Like the ferry however, a start date is yet to be announced. See euroferries.co.uk or euroferriesexpress.co.uk for more. Photo @MillwallFC

roundup: GERMANY. There are so many wrong-way drivers – ‘geisterfahrer’ (ghost drivers) – on the autobahns the government will invest €25m in a more sophisticated system than the current ‘Stop!’ signs. Nearly 2,000 incidents each year result in around 80 accidents and more than twenty deaths, mainly caused by dotty or drunk locals. RUSSIA. The up to forty hour queues for the Kerch ferry between the mainland and Crimea have turned deadly. One man suffered a heart attack at the wheel while a woman was lucky to escape after being set upon by a mob for trying to jump the queue. Nine ferries serve the route with 95 trips each day. The proposed bridge will take at least four years to build. Overall, tourism will be around half of last year’s total. Meanwhile, 1,000 Spanish trucks carrying fruit and vegetable are reported to have been turned around at the border due to new sanctions on EU food products. EU countries annually export around 105,000 trucks worth of food each year says Lloyd’s List. SERBIA. Large numbers of tourists heading for Montenegro, Macedonia and Bulgaria caused massive queues at some border crossings yesterday: five hours at Batrovci (Croatia) and four hours at Horgos (Hungary). Sid (Croatia) is one hour and Gostun (Montenegro) just 30 minutes. Meanwhile, construction work at the Doljani crossing in Bosnia (to Croatia) is leading to three hour queues outbound and a 90min wait inbound today. Delays at all other crossings are max 30mins. 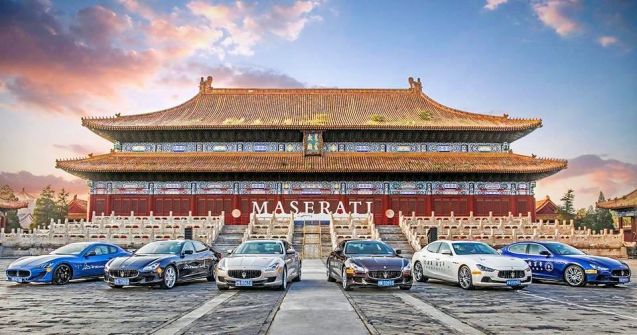 One hundred Maseratis set off from Beijing on Saturday to drive the 12,000km back to the factory in Modena in just 35 days. The route takes them through Manchuria and across Russia, to Moscow and Prague. All in aid of the company’s centenary celebrations. Keep up with the action at #RoadtoModena on Twitter.