Eurotunnel is not happy about the latest ruling by the Competition authorities.

‘Reflecting on the possibility of continuing to support the activity’.

Eurotunnel appears to be tiring of the legal battle surrounding the MyFerryLink case.

Yesterday, the Competition and Markets Authority (CMA) confirmed its restated decision to bar MyFerryLink from Dover after considering submissions from all the operators involved.

That decision is already subject to another appeal at the Competition Appeals Tribunal, currently scheduled for 24-25 November.

In a statement Eurotunnel says, ‘This position confirms in Groupe Eurotunnel’s opinion the unalterable determination of the CMA to bring to an end the activities of MyFerryLink.

As such, and under the hypothesis that the Competition Appeal Tribunal (CAT) simply remits its judgement to the CMA, as it did in December 2013, Groupe Eurotunnel would have to reflect on the possibility of continuing to support the activity. The order published today could weigh heavily on the forthcoming annual contract negotiations between MyFerryLink and the major cross-Channel freight transporters…

Groupe Eurotunnel strongly regrets the position that the CMA holds and its inevitable consequences.’

Eurotunnel did not immediately respond to a request for comment but a spokesman did tell @DriveEurope in March the company could cut its losses if the legal saga continued.

Meanwhile, MyFerryLink tells Travel Weekly it will continue to fight the case. Any order would not come into force until six months after a final decision. 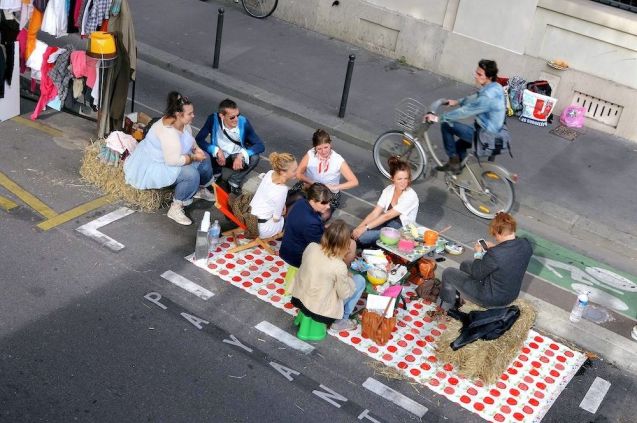 It’s Park(ing) Day today! Give a parking space a makeover then sit down for something to eat. Regular users will be delighted to have something so singular and dully practical transformed into something everybody can enjoy. Quid pro quo – help yourself to one of those sandwiches. Park(ing) Day is an annual event in towns and cities across France. See parkingday.fr

roundup: GERMANY. School kids allowed to operate radar guns during yesterday’s 24 hour national ‘blitz marathon’ anti-speeding operation bagged a parent and a teacher reports thelocal.de. Speeds were monitored from 7,500 locations around the country. Full results to be announced later today; last year saw 83,000 drivers fined. HAULAGE. Germany has the biggest haulage industry in Europe – followed by Poland, Spain, France and the UK – but in international work Poland is top, more than twice as big as next placed Spain according to Michelin. Five other eastern European countries make up the top ten. NORTH SEA FIRE. The man who started a fire on board the DFDS Newcastle-Amsterdam ferry last December has been jailed for 11 years. Boden Hughes had previously attempted to argue that as the incident occurred on the high seas then no court had jurisdiction though that case was pretty smartly thrown out. ALCOHOL. Drivers disembarking ferries in Stockholm will have to give breath samples at the exit barriers. The trial is on-going at the Frihamnen harbour this autumn. A similar trial was carried out with truck drivers in Gothenburg which cut the incidence of drink driving down to one twentieth of what it had been previously says Sveriges Radio. The system is automatic with a reusable mouthpiece that does not touch the lips.

New YouTube channel from @HarryM_Evo – founder editor of Evo magazine, now working with Jaguar Land Rover Special Vehicle Operations – featuring the cars in his eclectic collection (Lamborghini Espada, Series 1 Land Rover Defender, Lotus Elan, Ferrari 550 Barchetta, etc, etc, etc, etc, etc), some of his favourite events and – best of all from our point of view – the best roads he knows. Check out the launch vid below: