TODAY: continuing severe weather western Mediterranean, especially Aude and Pyrenees Orientales, France, see below. Particularly affected is the Agly River which flows down to the Med just north of Perpignan, across the A9. The parallel D900 has been closed due to flooding and Agly Valley evacuated. See more.

Extra heavy traffic expected around Gent and into Brussels, from all directions, due to strike in Belgium. Antwerp should be OK.

NEWS: the loose change booths have been removed from the M25 Dartford crossing as of this morning. It’s ‘smart’ payment only from now on.. Reduced service DFDS Dover-Calais until 4 January. 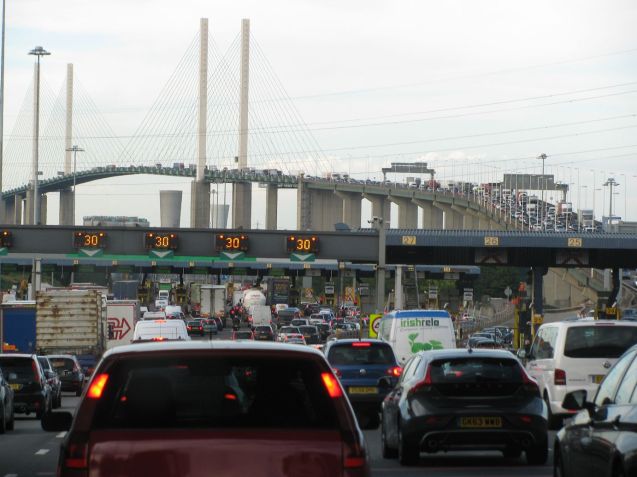 The new Dartford Crossing Remote Payment Scheme went live at 06:00 this morning. Free-flow should see the end of massive queues but drivers must either set up an account, or remember to pay the charge – over the phone, or by internet – by midnight of the following day. Not easy, or cheap, for those off in a Continental holiday rush.. The fine for failing to do so is £70 (£35 if paid within 14 days). The toll itself is now £2.50. The crossing is still free 22:00-06:00. Phone 0300 300 0120 or see http://www.gov.uk/dart-charge. Photo @DriveEurope

CHANNEL. DFDS Dieppe Seaways left Dover for the last time last night with @Port_of_Dover tweeting ‘thanks for your faithful service’. The ship was leased from Stena Line and will be refitted before taking up a new route for that operator, likely between the UK and Ireland. This leaves DFDS one ship down ahead of Christmas and New Year, one of the busiest periods of the year. @DFDSUKUpdates tweeted this morning there would be reduced service until 4 January. Rumours suggest the operator’s Seven Sisters ship will transfer to Dover-Calais from the Portsmouth-Le Havre route which closes at the end of the year. GIBRALTAR‘s Devil’s Tower Road now re-opened after being shut by rockfall.

A Jaguar F-TYPE coupe on the prowl around the Finnish lakelands in a promo video for Eccentric AI films. Soundtrack ‘Vast Days by Seian (feat. Elika Mahony)’. Pretty good.