Nobody seems to be sure exactly how the new rules will be applied but Germany’s new minimum wage rule for truck drivers is causing a lot of anxiety in Eastern Europe (updated).

Also, the Monte Carlo Rally kicks off today in the mountains behind Monaco. Switzerland’s annual motorway vignette rises by a whopping 20% at the end of the month thanks to currency fluctuations.

Merkel steps in to arrange talks with transport and labour ministers.

Truck drivers must be paid at least the minimum wage when working in Germany. Photo @DriveEurope

In an attempt to even up the imbalance between low wage foreign workers and domestic drivers, France and Belgium brought in large fines last year for drivers spending weekly rest periods inside their vehicles.

Meanwhile, as of 1 January, Germany says all truck drivers must be paid at least the national minimum wage of €8.50 while on its territory.

Precise details were scarce at this week’s European Parliament Transport and Tourism Committee leading to MEPs to urgently request more information. The next meeting is at the end of January.

There is some doubt whether the new rules apply to transit traffic, or to drivers not working with German companies.

Poland, just to the east of Germany, with Europe’s largest haulage industry, stands to lose the most from the new rules.

According to Trackinfo.eu hauliers have a duty to notify the authorities – at the Bundesfinanzdirektion West office in Cologne – before posting drivers to Germany.

Roundup update. 29 January: Germany will stick to its guns a Labour Ministry spokesman tells thelocal.de. ‘The minimum wage law is applicable to all employees while they’re working in Germany, whether or not the employer is located here or abroad,’ he says. Also, an MEP from Lithuania and another from Slovakia want a European Parliament debate on the subject in order to ‘force the European Commission to react to the situation more actively and promptly’ says the Lithuania Tribune. 28 January: the International Road Transport Union calls on the German authorities to introduce a moratorium on the rules ‘following Chancellor Merkel’s recognition of related problems while speaking at a New Year’s reception of the CDU District Association in Greifwald yesterday.’ It adds that the neither the IRU, EU nor Member States were given any notice, and that there is no information available in any language other than German. According to the IRU, the European Commission has ‘launched a detailed investigation on the new German law and initiated the pre-infringement procedure (EU Pilot) with a deadline of 21 February for German authorities to answer.’ 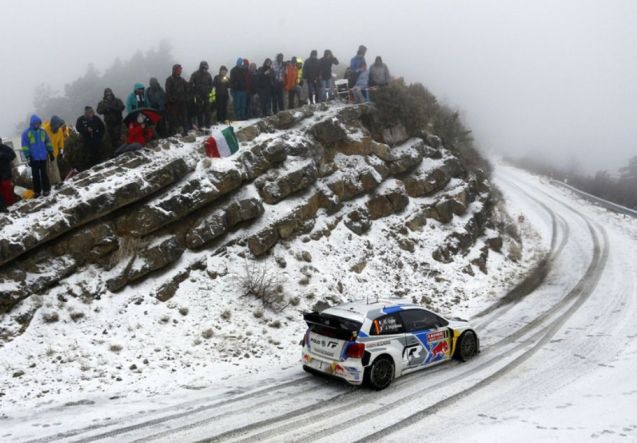 The Monte Carlo Rally kicked off last night on the mountain roads between Monaco and Gap. The final leg is a run down the legendary Col de Turini. Photo @FIA

roundup: SWITZERLAND. The price of the annual motorway vignette increases from €33 to €40 on 1 February thanks to the Swiss franc being ‘un-pegged’ from the euro last week. The currency has sharply risen in value since. The vignette is also available in dollars and pounds sterling but those prices are yet to be announced. Drivers heading to Switzerland this summer can buy the vignette in advance at its current price on-line at Swiss Travel System, valid until 31 January 2016. Some reports say another rise on 1 March has not been ruled out.