UK Border Force is confident new Exit Checks will be ready for the go live date after Easter despite a new delay and on-going issues with coach parties. Operators refuse to comment.

Also, the Neige et Glace Rally was aptly named this year. A new Rhine ferry will help relieve congestion during the emergency renovation of the Mainz-Wiesbaden bridge as a bridge in central Warsaw succumbs to intense flames and farmers blockade major roads into the capital, again. A surcharge will be added to Swiss fuel prices to pay for roads maintenance. Work starts on the important North Sofia Bypass next week.

Put back a week to avoid Easter weekend. Still problems with coaches. Operators refuse to answer questions on trials. 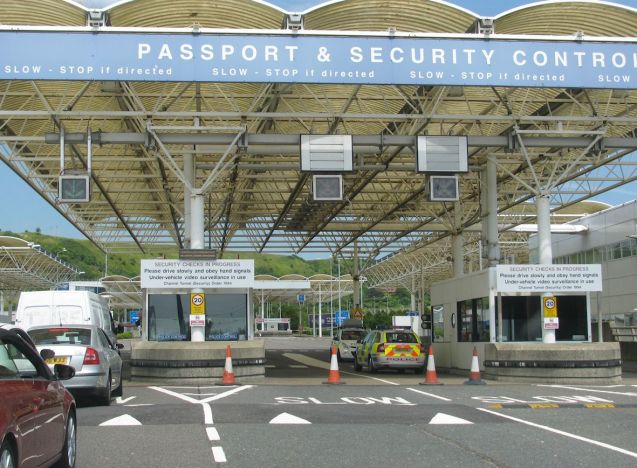 In what could be very good news for passengers heading off for Easter, the introduction of new Exit Checks at UK ports has been put back until Wednesday 8 April.

Almost all cross-Channel passengers leaving the UK will have their identities verified from that date under a new ‘count them in, count them out’ immigration policy from the Coalition government.

It had been intended to start on 1 April but has been delayed until after the busy Easter weekend at the request of the cross-Channel operators.

The breakneck development of the systems has played out at the UK parliament’s Home Affairs Select Committee.

Operators – who are responsible for collecting the information – told MPs last November they were very concerned about being ready in time.

However, the Director General of UK Border Force Sir Charles Montgomery said at a follow up session last week, ‘In the same way I am very confident the Border Force will pay its role in being absolutely ready for 8 April to go live I am also confident the port operators will be ready to do their part in the programme as well.’

Port of Dover is understood to have conducted exit check trials in January. Eurotunnel has carried out two trials so far, most recently last Friday when passengers at the UK terminal faced a consistent thirty minute delay. It is not clear if that was caused by the trial.

Neither Port of Dover nor Eurotunnel answered repeated requests for information this week.

The outstanding issue is coach parties. Ministers apparently decided within the past few weeks to exempt coach parties of children under the age of sixteen.

Sir Charles said, ‘The coach sector is the most difficult of all, logistically. That has been the focus of trials and tests at each of the major ports which operate coach travel. The trials are still underway, they are continuing to refine and change practice to make sure the regime works as smoothly as possible. I’m confident we will have a solution come the go live date.’

The Neige et Glace Rally 2015 – through the Jura mountains in the Doubs, east France, finishing in Pontarlier – was aptly named this year. More at Zaniroli.com

roundup: WIESBADEN-MAINZ. From tomorrow (19 February) a new car ferry will run across the Rhine between Walluf and Budenheim, a few miles west of Wiesbden/Mainz, to relieve congestion during the emergency renovation of the A643 Schiersteiner Bridge reports ADAC. An extra ferry will also ply Bingen-Rudesheim, further west. Traffic has not been too bad in general since the Shiersteiner Bridge shut suddenly last week – after the road way fell 30cm overnight – though this morning, and last Friday, delays were more than 45mins on the A60 eastbound into Mainz from first thing. POLAND. At the same time, drivers in central Warsaw face weeks if not months of inconvenience after a massive fire on the Lazienkowski Bridge on Saturday melted the tarmac and buckled the supports reports NewPolandExpress.pl. Wooden planks stored underneath apparently caught fire which spread to nearby wooden scaffolding. Arson has not been ruled out. Meanwhile, major roads into the capital were blocked again today – for the third Wednesday in a row – by angry farmers. The long-running dispute on a number of issues is yet to be resolved. Further blockades are possible. SWITZERLAND. Following the government’s failed bid to increase the price of the annual vignette to pay for road maintenance, Plan B – a ring-fenced fuel surcharge – has been approved by the cabinet says Swissinfo.ch. From 2018 the price of fuel will rise between 0.30-0.36CHF, less than the 0.45CHF initially proposed. The idea will be put to a referendum at a later date. BULGARIA. Construction on the Sofia Northern Speed Tangent (SNST) starts next Monday with the major part of the 16km road expected to be finished this year says Novinite.com. Also know as the Sofia North Bypass, the new road undercuts the existing Sofia Ring Road to connect the four motorways converging on the capital.