A trial on the A58 between Tilburg and Eindhoven aims to smooth out so-called ‘Ghost Jams’ by feeding drivers target speeds via a smartphone app. It’s a small part of a big cross-Europe experiment in new Cooperative Intelligent Transport Systems.

Also, The Game of Thrones’ King’s Road revealed. The UK government backs a clearway plan for Dover A20. Croatia ditches motorway sell-off, but where does this leave the planned Adriatic-Ionian motorway? Poland moves to owner/keeper – rather than driver – traffic fines.

SMOOTHING OUT ‘GHOST JAMS’ ON THE A58 TO EINDHOVEN

Spook or ghost files are jams which occur for no other reason than one vehicle on a busy road randomly braking too hard.

The ripple effect as those behind brake too is amplified to the point that traffic comes to a standstill, see video above.

The A58 between Tilburg and Eindhoven in the southern Netherlands is well known for spook files.

Up to 40% of jams on the A58 lack an obvious cause compared to 22% nationally hence it being the ideal test bed for a new smartphone app which aims to smooth out traffic flow.

It works by monitoring traffic ahead in real time then calculating the ideal speed at which following drivers can overcome these ghost file traffic bumps.

The info is fed back continuously via the smartphone mounted on the dashboard.

Drivers are advised to achieve target speeds gently to avoid starting a braking ripple of their own.

Just two percent of the 73,000 vehicles which use the 17km test stretch daily need to take part in the trial, starting this month, to improve journey times for everybody it is claimed.

Foreign drivers can take part just by downloading one of the three apps used in the trial – Zoof, Smartcar and Flow Patrol – all available for free from app stores.

Interestingly, A58 was involved in an earlier experiment in 2011 to lower the speed limit to as little as 70kmh though in fact more jams resulted.

This specific project is a collaboration between the roads directorate Rijkswaterstraat, the regional council and the ministry of Transport.

It’s a small part of a wider experiment to test the first applications of new Cooperative Intelligent Transport Systems (C-ITS) – vehicle to vehicle and vehicle to infrastructure communication – on a 1200km corridor between Rotterdam and Vienna, all intended to reduce congestion, increase road capacity and improve safety.

See more on C-ITS or more on the A58 Spook Files project (Dutch only). 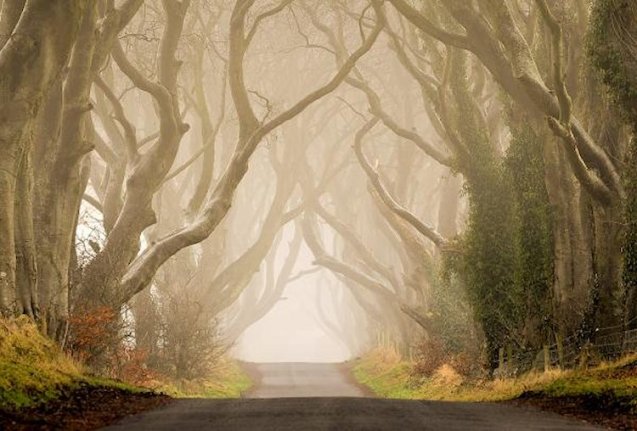 The Dark Hedges: much of the cult TV series Game of Thrones was filmed in Northern Ireland and the locations have been assembled in a new website. The Dark Hedges, an avenue of beech trees planted by the Stuart family in the eighteenth century to wow visitors to their Georgian mansion, Gracehill House, doubles as the King’s Road in Series Two. It’s actually off the Ballinlea Road between Ballymoney and Ballycastle on the north coast, opposite the Gracehill Golf Club. For more information see DiscoverNorthernIreland.com/gameofthrones/

roundup: DOVER. The government will support a proposal to make the A20 into Dover a clearway with no stopping or parking permitted reports Dover Express. MPs debated traffic management in Kent in parliament earlier this week, wrapped up by ‘beautiful roads’ transport minister John Hayes. Two new thousand-space truck parks were also proposed by local MPs. CROATIA has abandoned plans to sell off its motorway network reports BalkanEU.com. The government had been in talks with investors such a Goldman Sachs and Australia’s Macquarie Bank, among others, about a forty year concession contract to off-load state debt and interest payments and stimulate further improvements. However, citizens opposed collected a 530,000 signature petition. Earlier this month, the German deputy Chancellor Sigmar Gabriel formally approved the Ionian-Adriatic motorway, one of the particular projects to benefit from the concession plan. POLAND. In an apparent effort to increase yields from traffic fines – forty percent of speeding penalties for instance go unpaid, apparently – the major collation party wants to make the owner or keeper of the vehicle liable rather than the driver reports Radio Poland. The issue of countries which fine the driver and those which fine the owner cropped up during the debate on the new EU Cross-border traffic fines directive in December. It’s still unclear whether the owner or driver is liable for these fines.