The much feared Exit Checks start at UK ports and Eurotunnel today, but will they cause queue chaos, or will it all be a bit of a damp squib?

All passports scanned but time-consuming ‘verification’ phased in. 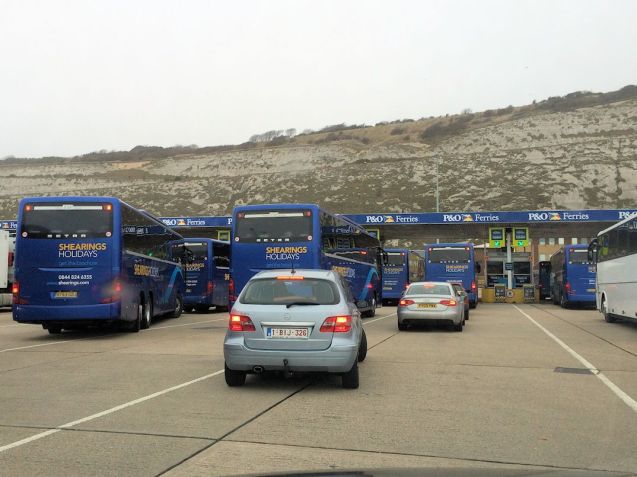 New Exit Checks are not expected to cause big delays initially* but warnings have been issued about peak holiday days.

From today, most drivers and passengers leaving the UK will be subject to identity checks at check-in, similar to those already in use by the airline industry.

The process varies by operator and type of passenger but essentially has two stages: scanning passports and then verifying the details.

The latter stage takes the time hence verification – checking the passport against the face of the passenger – will be phased in as the system beds down.

A P&O spokesman tells the Telegraph, ‘The actual scanning of passports is quick. It’s the verification that takes longer.’

According to a widely reported Home Office briefing last week, for the first month only 25% of passengers will have their details verified, rising then to 50% and 100% by mid-June.

In a letter to MPs on the Home Affairs Select Committee last month, Eurotunnel said, ‘Trials conducted at the year-end demonstrated that it is possible to conduct these checks at quiet periods, but that as traffic builds, so the risk of disruption and delay increase. Our principal concern is the likelihood of significant delays occurring on peak holiday departure days.’

Exit check trials in Dover found the time taken to check-in doubled to just under one and a half minutes per car.

The same trial found that for two ferry operators the extra time taken for freight customers was ‘negligible’ but the other – un-named – operator saw check-in times rise by a third to more than three minutes.

The only exceptions to Exit Checks, so far, are for passengers on ‘closed’ coach services, i.e. tour groups. Passengers on scheduled services will have the checks.

In an attempt to smooth the process Eurotunnel car shuttle customers are asked to provide Travel Document Information (TDI) in advance but this was found to be impractical for freight drivers.

Meanwhile, Brittany Ferries tells @DriveEurope it has already been collecting the information for the past two years at the request of the French authorities and does not expect the new checks to impact customers.

UPDATE: according to on-the-spot reporting from Kent Online, the first day of Exit Checks passed without disruption.

roundup: FRANCE. Motorway tolls will not increase this year announced Prime Minister Manuel Valls earlier today. A planned rise of 0.57%, due to 1 February, fell victim to a row over the ‘excessive profits’ of the motorway operators though a committee of MPs later accepted profits should be judged over the life of the concession contract rather than the back-loaded later years. The government has also launched a new road safety website to answer driver queries (French only) on contentious aspects of the law. For instance, like Spain and Belgium recently, it makes the tolerances applied to potential speeding offences clear: 5kmh below 100kmh or 5% above, for regular cameras, and twice that for the new generation of mobile radars. BOSNIA. Winter tyres cease to be mandatory after 15 April reports Sarajevo Times. Summer tyres are also acceptable as long as they have at least 4mm of tread and the driver carries snow chains. CROSSING THE CHANNEL. The former Stena Nordica has been chartered by DFDS for its Dover-Calais route starting next Tuesday (15 April) according to lemarin.fr. The route has been operated by just one vessel for some months.