Fuel prices edge up all round this month but there are still significant savings to be made by refuelling on the other side of the Channel.

Buy petrol before the Netherlands, and diesel before Switzerland, but wait for Spain, Andorra, Luxembourg and Austria.

British diesel may not be the most expensive in Europe any longer – having slipped behind traditional chart topper Norway – but at an average €1.678/l it is still more expensive that it was last month.

France is still way down the list at 22nd most expensive diesel in Europe (and 16th unleaded95).

With unleaded95 the UK has edged up into fifth place at €1.609, again more expensive than last month, behind Norway, Netherlands, Italy and Denmark.

At the same time, unleaded95 might be a mid-pack €1.487 in Switzerland but the diesel is now Europe’s fourth most expensive at €1.535.

Finally, Austria is really embedding its reputation for cheap fuel. At €1.099 diesel is on a par with Luxembourg but unleaded95 at €1.209 is actually cheaper.

All prices are indicative only, per litre, taken from fuel-prices-europe.info, updated daily. Mainly averages except Belgium and Luxembourg where prices are nationally regulated. 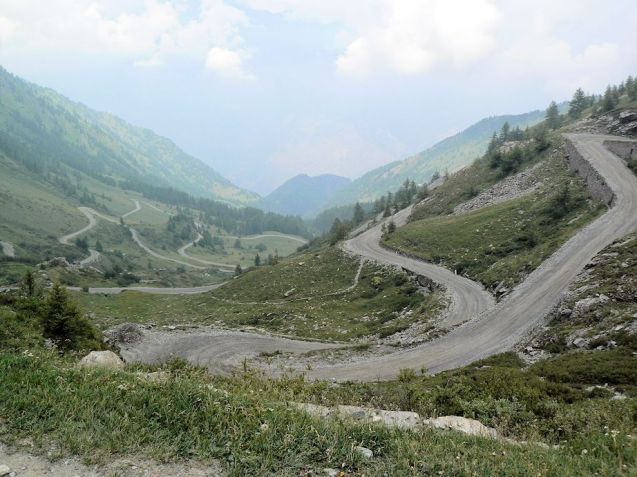 With its ‘endless hairpins’ and unpaved final 8km – and so tiny on the map you can hardly see it – Colle delle Finestre (2178m) makes a fitting finale for this year’s Giro d’Italia. It runs 18.6km from the Susa Valley in the north – off the A55 Turin-Lyon – to Val Chisone and Sestriere in the south, and on to Briancon over the French border via Col de Montgenevre. Photo Wikipedia

roundup: ALPINE ROADS. Norway’s Trollsteigen and Col de Tourmalet in the Pyrenees both opened today. Meanwhile, Italian police have announced mountain road speed checks in South Tyrol during some weekends this summer reports ADAC: Saturday 16 May Karerpass; Sunday 24 May Gardena, Saturday 6 June Stelvio; and Saturday 15 August Timmelsjoch. See PassFinder for the locations. Further dates to be announced. LUXEMBOURG. The standard traffic fine will double from 1 June, to €145 says Wort.lu. It will apply to drivers using a mobile phone at the wheel; tailgating; ignoring no-entry signs; not wearing a seatbelt; and those with incorrectly installed child seats. It comes amid a general tightening up as the Duchy attempts to tackle its outlying road safety record. DENMARK. Copenhagen’s traffic wardens are to double as tourist guides reports the Copenhagen Post. Eleven of them will wear large ‘ASK ME’ signs to begin with, throughout the summer. If successful numbers will be increased next year.