The European Commission launches a formal objection to the ‘disproportionate’ minimum wage rule for truck drivers in Germany, as Belgium sets the charges for its upcoming electronic truck toll system and France clarifies its weekly rest rules.

Also, one thousand electric vehicles average 450km each day on a tour of northern Europe. Hundred percent Exit Checks during very busy weekend at Dover. A spate of car-jackings to the west of Paris. The competition authority will appeal last week’s MyFerryLink decision. 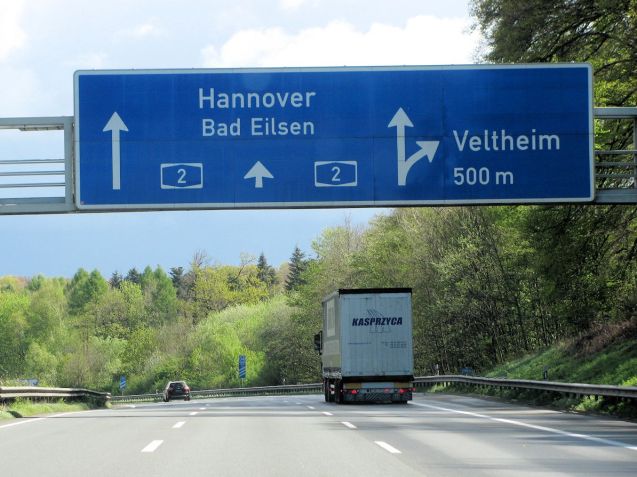 The European Commission has launched an infringement procedure against the new German minimum wage rule for truck drivers.

The country introduced a minimum wage for the first time in January, set at €8.50 per hour.

It also applies to truck drivers, even those just passing through the country.

In a statement the Commission says, ‘Whilst fully supporting the introduction of a minimum wage in Germany, the Commission considers that the application of the Minimum Wage Act to all transport operations which touch German territory restricts the freedom to provide services and the free movement of goods in a disproportionate manner.

In particular, the application of German measures to transit and certain international transport operations can in the Commission’s view not be justified, as it creates disproportionate administrative barriers which prevent the internal market from functioning properly.’

All transport companies operating on German territory are required to prove their employees were paid at least €8.50 per hour, including evidence such as previous wage slips.

Reports last week said the rules were starting to be enforced with numerous complaints about the amount of paperwork involved.

The German authorities have two months to respond to the Commission.

The Polish government in particular strongly objected to the new rules, as did the International Road Transport Union (IRU).

Kevin Hopper, managing director of Brian Yeardley Continental tells us via Twitter (@bcyl1975) he disagrees with the Commission adding, ‘If certain EU member states paid their drivers proper pay rates it would level the playing field in the EU.’ He also said the paper work has taken ‘minutes’ to complete.

Meanwhile, Michael Cramer MEP, chairman of the European Parliament Transport and Tourism Committee – who mounted a spirited defence of the minimum wage law at the recent meeting on the subject – said on twitter (@MEPMCramer), ‘The EU Commission starts infringement procedure on German minimum wage for truck drivers. If only they’d been so outspoken on social dumping!’

Also, Gesine Meissner, another German MEP – and member of the Transport and Tourism Committee – said the EU’s action was right, adding, ‘Otherwise we fall back into the Turnpike mentality and protectionism.’

Flanders in northern Belgium has published the rates for its upcoming electronic toll system due next April, applying to vehicles 3.5t+, reports FlandersNews.be. Called Via Pass, the charges vary by weight, emissions and the type of road from €0.074 per km up to €0.2 per km. For more information see ViaPass.be.

France has published a clarification of its rules on weekly rest periods introduced last year, via Trackerinfo.eu. Since last July, drivers cannot take extended weekly rest periods inside their trucks. The note makes clear that the employer is liable for any penalties – a fine of up to €30,000 and one year in prison – rather than the driver though there are still queries over the status of self-employed drivers. 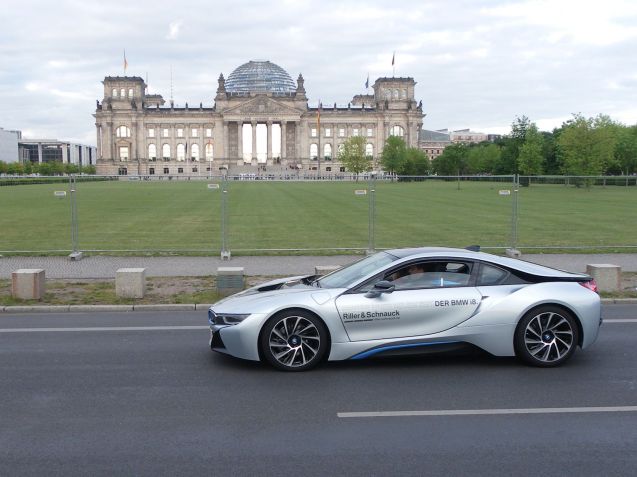 A BMW i8 passes the Berlin Reichstag during last week’s nine-day all-electric ‘eTour Europe’. Around 1,000 electric cars took part, on a circular tour starting and finishing in Munich via Basel, Luxembourg, Paris, Brussels, Amsterdam, Bremen, Berlin, Dresden, Prague, Bratislava, Budapest and Vienna. The total distance was 4200km at an impressive daily average of 450km. Taking part were not just standard production cars or hybrids but specialist conversions such as the Kreisel Electric Porsche Panamera 4S which boasts a 300kmh top speed and 450km range. For more information see eTourEurope.eu

roundup: DOVER. Full Exit Checks were not expected to start until mid-June but Dover-Calais ferry operator MyFerryLink warns that all passengers will be subject to the identification checks this busy holiday weekend. It will be the first proper test for the new regime since its partial introduction in early April. Dover is expected to be ‘very busy’ from Friday evening and all day Saturday; MyFerryLink advises car drivers to use the M2/A2 into the port. See more on Whitsun holiday traffic. FRANCE. There have been ten reported instances of car-jacking in Yvelines, the region to the west of Paris, since 7 May reports France Bleu (though there is nothing to suggest foreign drivers have been targeted). Drivers have been flagged down by cars with blue lights and vehicles stolen after owners were asked to open the boot. The advice is to remain in the vehicle and call the 112 emergency number if unsure. MYFERRYLINK. The Competition and Markets Authority (CMA) will appeal last Friday’s Court of Appeal judgement overturning its decision to bar the ferry operator from Dover. In a statement it says, ‘In seeking permission to appeal, the CMA is also seeking greater legal clarity for the wider benefit of the UK merger regime.’