Extraordinary developments this evening as P&O suddenly restarts Dover-Calais services while DFDS’ remain suspended. It appears the strikers now agree P&O is being unfairly impacted in the dispute. Where this leaves DFDS and Eurotunnel is anyone’s guess. Union leader Eric Vercoutre earlier threatened to step up the action tomorrow and Friday. See more on this, and the rest of the day’s events, in the live blog below. 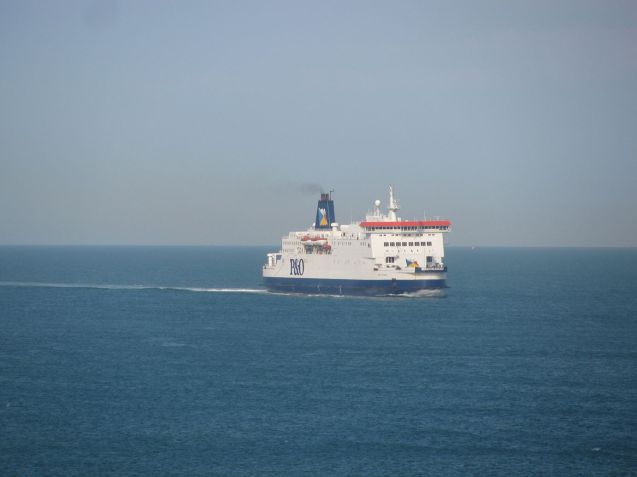 P&O is operating a crafty no-frills, strictly one-way, limited service from Dover to Boulogne between 05:30 and 17:30. Vehicles escorted from the port by security staff. See POFerries.com

17:00: a statement from DFDS (via KentOnline) says its offer to take on 202 MyFerryLink employees has been rejected. It says:

‘DFDS has had no response to this offer and is surprised by the apparent unwillingness of the SCOP Seafrance administrators to engage in a dialogue with DFDS.

Yesterday night, DFDS was informed by the administrators that this offer was rejected.

DFDS regrets the position taken by the administrators, but remains at the disposal of the Commercial Court of Boulogne to discuss a transfer of parts of the SCOP Seafrance business in order to minimize the social impact of the potential liquidation of SCOP Seafrance.

The rejection of the offer does not affect the agreed bareboat charters between DFDS and the Eurotunnel Group, which will commence on 2 July 2015.’

The question now is, will DFDS be able to evict the strikers currently occupying the two ships in Calais harbour when it officially takes possession? We have asked but are yet to hear back.

A note on the firm’s website says its Dover-Calais sailings are suspended by industrial action until 23:59 Friday 3 July.

16:00: the MyFerryLink.com website has gone offline sometime in the past ninety minutes. In it’s place is a simple homepage containing advice for passengers with bookings made for after today, on getting a refund or transferring to Eurotunnel.

A statement signed by managing director Robin Wilkins says, ‘Everyone at MyFerryLink is disappointed that our company and our service to customers cannot continue. We are extremely sorry for the inconvenience to you, but would like to thank you sincerely for booking with us.’

14:30: DFDS says it has space available on its Dover-Dunkirk route – and the ships are now back on schedule – though there is freight traffic management in place due to heavy traffic.

Under the circumstance says Eurotunnel, passengers arriving late will be accommodated on the next available crossing at no extra cost. Meanwhile Eurotunnel exit J42 on the A16 is open and ‘maintained by the authorities’.

13:30: tragi-comic blogpost – The Road to Hell – from comedian Ian Moore who found himself caught up in yesterday’s chaos at Calais. He also saw some fisticuffs between a truck driver and migrant.

Inevitably with the heat and delays tempers have frayed. Yesterday afternoon a Dutch trucker was apparently surrounded by seven migrants who ‘threatened to kill him’ (via @Justice4Truckers). He turned round and went back to the Netherlands.

12:15: a meeting of 250 strikers this morning, see previous, decided to have a ’relaxing’ day today – though still maintaining the Calais blockade – before stepping up the action tomorrow and Friday, including ‘multiple actions’ to block the Channel Tunnel reports La Voix du Nord.

An opportunity for the authorities to step in should come at midnight tonight when the ships officially pass to DFDS.

Quick roundup 12:00: union members are due to vote this morning on whether to call off – or escalate – the strike action reports thelocal.fr.

@UKinFrance says Calais local authorities have plans to address the lack of food and water for drivers stuck on the A16 Dunkirk-Calais. The Red Cross has been distributing water to those stuck across the Belgian border we are told.

10:00: with no delays now at Eurotunnel freight UK, the first trucks are starting to leave Operation Stack on a regular basis to make their way to the Channel Tunnel. Still long delays in France, up to five hours before check-in, though the wait is apparently compounded by security checks for stowaways after the vehicles have been loaded onto carriages.

Port of Dover publishes a guide to Operation Stack in eleven different languages.

At the same time, the chief executive of the Road Haulage Association, Richard Burnett, tells the Guardian, ‘The UK and French governments must acknowledge their responsibilities to all port of Calais users, move in and act. If this means deployment of the armed forces then so be it.’

08:00: whatever the general picture yesterday, see below, drivers stuck in the M20 Operation Stack truck queue are certainly being fed and watered this morning. KentOnline reports a ‘huge effort’ to bring supplies by the Kent Coastguard and County Council. Meanwhile however there are still concerns about drivers held in queues on the other side of the Channel.

07:30: MyFerryLink says it has secured some transfer space with Eurotunnel for essential travel. ‘Qualifying traffic’ should check in at Dover to be issued with a transfer voucher.

06:00: last night was the first night since the dispute began that Eurotunnel suffered no migrant invasion or suspension of services at its French terminal.

As well as Operation Stack on both sides of the M20 in Kent J8/9, freight is queuing on the A16 from the Belgium border to Dunkirk.

OVERNIGHT: @KentPoliceRoads was very put out at suggestions trucks drivers in Operation Stack on the M20 were left without water yesterday. It says water was distributed by @KentHighways and @Kent_CC and supplied by Tesco. Nevertheless driver @AlanBall4234 waited eleven hours until water was dropped off by the coastguard. @YouAreParsons said he waited ‘a very, very long time’.

Eurotunnel chief executive Jacques Gounon is being hauled before French transport minister Alain Vidalies on Friday to answer questions about the MyFerryLink deal.

Catch up with yesterday’s events here.