After a torrid eighteen months for road safety in France road deaths fall significantly in September – but the number of car drivers killed rises sharply. 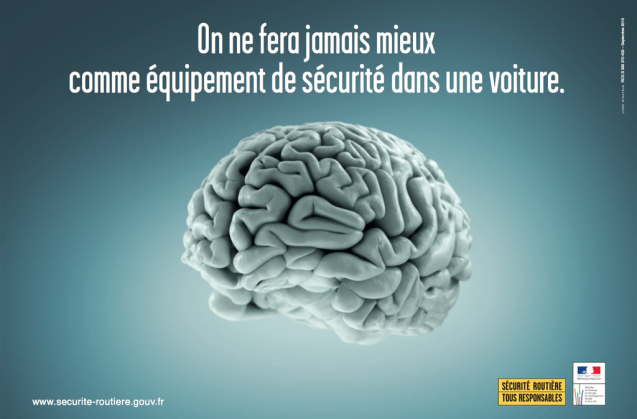 ‘You never will do better as a safety device in a car’ – one of a number of striking road safety ads published in France as it tackles road safety head-on.

Just a few days after the Prime Minister chaired an emergency road safety council there has been some rare good news for road safety in France.

The number of road deaths fell by a significant 17.4% in September compared to the same month last year it was revealed today.

Today’s news means the 4.6% rise in road deaths up until the end of August has now been cut to 1.8%.

However, while the number of pedestrians killed was sharply down, and tailed off for cyclists, moped riders and bikers, the number of drivers killed rose by 9% last month compared to September 2014.

The figures for truck drivers, the only category to have seen decreasing fatalities in recent months, are yet to be published.

Last week’s inter-ministerial council on road safety, the first such meeting in five years, came up with a raft of 22 new measures to tackle what has been described as a crisis of road safety in France.

As well as 500 new fixed radar traps and 10,000 decoys, drones to monitor driver behaviour and compulsory helmets for cyclists under the age of twelve, a new system of ‘virtual licences’ for foreign drivers was announced.

Under the new scheme, drivers from abroad will have points deducted – from a total of twelve – for traffic offences, including speeding.

If zero points are reached the driver will be barred from French roads. Further details are expected soon.

Spectacular dams have been on the agenda since Chris Pointon’s adventures at the ‘Goldeneye’ Moiry Dam earlier this summer (see the video). Just an hour’s drive west of Moiry, in south west Switzerland, is Grande Dixence. It may lack the James Bond heritage but it has an equally interesting road winding up to its north east corner, with the added bonus of the keenly priced Hotel du Barrage at the top. Photo Grande-Dixence.ch