A new partnership between Mercedes-Benz and a German classic car hire firm launches SL tours of the South of France and Tuscany.

ON TOUR WITH MERCEDES-BENZ CLASSICS

New driving trips through the South of France or Tuscany in a classic Mercedes-Benz SL. 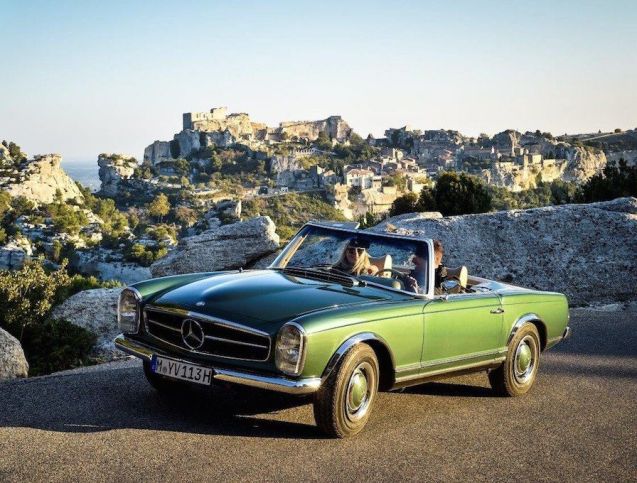 Business Innovation – Daimler’s in-house laboratory for new business ideas – reckons customers are more interested in using and enjoying luxury goods than they are in actually owning them.

To this end it has teamed up with Nostalgic Classic Car Travel in Munich to offer tours through France and Italy in two SL models, the original 1960s W113 ‘Pagoda’, above, and the more modern R107 ‘Bobby Ewing’ car.

The routes, through Provence and the Cote d’Azur and Tuscany – with another in South Tyrol in the works – give customers, it says, ‘the chance to experience the unique character, charm and power of a Mercedes-Benz old-timer without the high cost of acquisition or maintenance, combined with a chance to experience the most beautiful routes in Europe.’

The Provence tour, over four days next April, September or October takes in perfume capital Grasse, the Gorges du Verdon, the Lac de Sainte Croix, Van Gogh’s Saint-Remy and Avignon with one night at the Hotel InterContinental Carlton in Cannes and the other two at Relais & Chateaux properties.

The Tuscany tour, also four days, in May or September, includes Florence, Siena, Chianti, the ‘Crete Senesi’ cratered clay hills, Montepulciano and San Gimignano, all from a base at the Hotel Borgo Scopeto outside Siena.

Each tour costs €1975 per person based on two sharing and includes B&B hotel accommodation, fuel, one lunch, one dinner and airport transfers but not flights.

Aside from the SL trips, Nostalgic hosts tours in Germany, Italy and France with a range of classic convertibles from Alfa Romeo, and VW Beetles.

Click for more information on Mercedes Classics, or Nostalgic.

Throw Back Thursday: R45 Eidsborgvegen at Dalen, on the west end of Lake Bandak in south central Norway in the late 1930s. Photo via @Elusive_Moose

Today’s headlines: more sections of motorway in the Netherlands will have speed limits raised to 130kmh reports DutchNews.nl, taking the total to 61% of the network with a target of 71%. Some locals object to the higher speeds on grounds of noise and pollution. Road sections which switch between 120kmh and 130kmh have long been a source of controversy; TranMin Melanie Schultz promises ‘clarity soon on speed limits’. Also, popular initiative group in Switzerland has almost enough support to hold a national referendum on raising the speed limit from 120kmh to 140kmh on motorways reports Le News.ch. Groupe pour une Suisse sans Armee (Group for a Switzerland without an army) has until 20 November to collect the final 9,000 signatures it needs to pass the required 100,000 mark. A similar vote failed in 1989 but GSsA has a powerful supporter in national motoring club TCS. Scientists in France are developing a saliva test for fatigue, the leading cause of death on autoroutes. Drivers would test themselves before getting in the car. Sponsored by operator Vinci, the first definitive results are expected by the end of the year. Meanwhile, distraction and inattention contributes to between 10-30% of road user accidents in the EU says a new report published by the European Commission. It says voice recognition, biometry, head up displays, artificial intelligence, and vehicle automation will all help according to ITS group Ertico, as will standardised HMI (Human Machine Interface) design. Meanwhile, a call for proposals under the European Commission’s Connecting Europe Facility was announced today. The fund amounts to €30bn in total with €24bn earmarked for transport. This second round disperses €7.56bn, the lion’s share of which (€6.47bn) is directed to countries already receiving Cohesion funds – in Eastern Europe, the Balkans plus Portugal – where the priorities will be projects along the EU’s core network corridors. The remaining €1.09bn is open to all countries and will focus on hi-tec schemes like Intelligent Transport Services. The deadline for applications is 19 January with awards scheduled for next September.