Also, a quick look at the Dutch home of ‘the world’s oldest private collection of classic cars’. Spain’s riskiest roads – or rather, least safe. Luxembourg diesel falls in price again, leaving Austria behind.

CALAIS SLIDING BACK TO DARK DAYS OF THE SUMMER

A migrant attacks a truck driver with a lump hammer in Calais today in violent scenes described by the FTA as ‘unprecedented’. Photo via Les Calaisiens en Colere/Facebook.

A day before one of the busiest weekends of the year, Calais threatens a return to the worst days of the summer.

Happily it seems a blockade of the port by former MyFerryLink workers has been averted for now, but this afternoon ‘thousands’ of migrants blocked the A16 motorway in an apparent attempt to reach Eurotunnel.

The Freight Transport Association’s Chris Yarsley was in Calais today.

He says, ‘I am flabbergasted at what I have seen today; there were literally thousands of migrants benefitting from the queue of slow moving traffic on the roads around Calais. They were attacking vehicles; breaking the locks of trucks, slashing roofs of the lorries and climbing in the back of them.’

The A16 motorway was blocked in both directions between Calais and Eurotunnel for several hours this afternoon before police brought the situation under control.

As in late November, the attack was co-ordinated with simultaneous disturbances in the town centre which split police resources says Yarsley.

Eurotunnel is to hold a round table meeting with the FTA, IRU International Roads Union, Border Force and others to discuss security at Calais.

Meanwhile, French transport minister Alain Vidalies said this evening that a review of yesterday’s Supreme Court ruling ‘seems to leave an opportunity to continue the operation of the single boat North Pas-de-Calais.’

He wants a meeting with all those involved in early January he said.

Eurotunnel said yesterday it would sell the ferry and abandon attempts to run a freight only service after the Supreme Court backed the original competition ruling barring the firm from running ferries at Dover.

After threatening to blockade Calais on Wednesday, MyFerryLink union leader Eric Vercoutre said today Eurotunnel had no right to sell the ferry. Workers are due to meet again at 11:00 tomorrow (Friday). 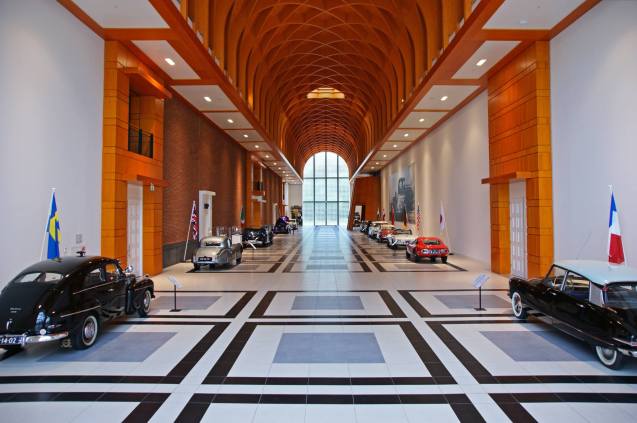 The Louwman Museum: home to reputedly ‘the world’s oldest private collection of classic cars’, compiled by two generations of the Louwman family, the Dutch Chrysler importer. The 250 vehicle exhibition includes a 1929 Mercedes-Benz SSK, Bugattis, Alfa Romeo racers, the original James Bond Aston Martin DB5, a 1960 Porsche 718 F2 car and a 1968 Toyota 2000GT (the list goes on and on). The ‘Post Modern’ building was designed by Memphis Group architect Michael Graves and opened in 2010. It is off the N44, just north east of The Hague in the western Netherlands. See LouwmanMuseum.nl

roundup: SPAIN. An analysis of nearly 25,000km of highways by EuroRAP European Road Assessment Programme identified just over 14% at ‘unacceptably high risk’ of accidents. The most dangerous road is a stretch of the N-320 between Guadalajara and Madrid, followed by N-435 in Badajoz and the N-340 between Granada and Almeria. All ten of the riskiest roads are single lane stretches. Galicia in the northwest and Catalunya in the north east have the highest proportions of most dangerous roads. Read El Pais English’s take on the report, or read it in full at EuroRAP.org. Despite all this Spain has made huge gains on road safety in recent years and is now nipping at the heels of the safest countries: UK, Sweden, Denmark and the Netherlands. LUXEMBOURG. The price of diesel has dropped yet again (three times in the past fortnight). A litre of derv is now down 3.3c to – the nationally regulated price – €0.88/l (around 64p) says Wort.lu. It still has a way to go to match Europe’s cheapest, Andorra, at €0.854 according to Fuel Prices Europe. Close competitor Austria at €0.934 is slipping (relatively) down the table. See more on Europe’s cheapest fuel.