Avoid driving in the Netherlands on Thursday evenings, in the rain, on the A20 at Rotterdam.

NETHERLANDS TRAFFIC JAMS UP BY A QUARTER

Most congested road A20 Hook of Holland to Gouda via Rotterdam.

The Netherlands might have come top in the European Commission ’s recent transport rankings but it has been struggling this year with a relentless rise in traffic.

Jams are up 25% overall in 2015, ‘the largest absolute and relative increase since records began in 2000’ says traffic monitor VID.

It reverses a steady decline in traffic since 2007, before the Credit Crunch, and takes levels back to those last seen in 2011.

So far this year there have been more than fifty rush hours with cumulative traffic jams of over 350km – the point when it is officially said to be ‘busy’ – compared to just 27 in 2014.

By far the most congested road is the A20 between Hook of Holland and Gouda (via Rotterdam).

Eastbound at the Terbregseplein A20-A16 junction, and Moordrecht (near Gouda) are the two most jam prone stretches in the country while westbound at Rotterdam-Centrum comes in at number seven.

The A1 southbound Amsterdam-Amersfoort, northbound A16 Breda-Rotterdam (again at Terbregseplein) and the A28 Amersfoort-Utrecht round out a top five which is unchanged since last year.

VID blames not just a recovering economy but rain too. In the last four months of this year there were 42 rain-hit rush hours compared to just 15 in the same period last year.

Meanwhile, five of the top fifteen longest traffic jams in the past five years occurred on Thursday evenings.

The Netherlands is not the only place in Europe to see record traffic recently, particularly during this last quarter. Madrid and Paris have both seen mega-jams with rain partly to blame there too. 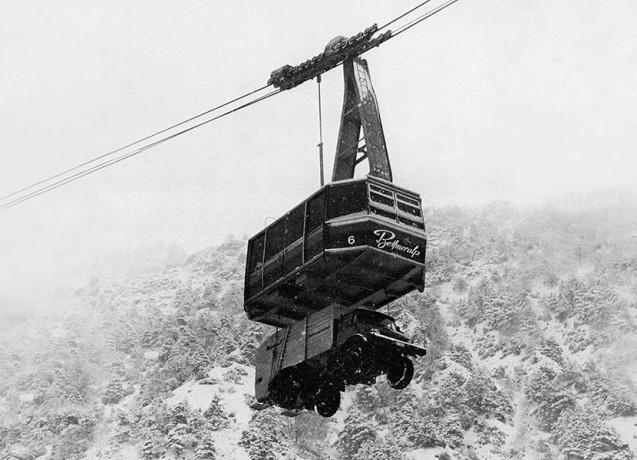 Betten in the Valais in south central Switzerland – beside the 23km Great Aletsch Glacier – was, and is, only accessible by cable car. Rather than manhandle stinking piles of rubbish, the residents decided just to sling their 9.5t Unimog underneath the gondola. It took seven minutes to descend 1100m and 2.43km to the incinerator in the valley below, on the H19 between Brig and the Furka, Grimsel and Nufenen Passes. Photo Mercedes Benz Road Stars.

roundup: FRANCE. A driver advises against the temporary bypass road around Lake Chambon for skiiers heading to the Brianconnais over Christmas and New Year. Writing for Skions.com, Raphael describes the road as ‘quite exciting’ and ‘steep, narrow, winding, with no guard rails and frequently frozen’ (via Wintersporters.nl). It was opened last month for locals heading to and from school and work and is not intended as a through-road as such. It is already barred to ‘heavy vehicles’. Furthermore, the road is not wide enough for two cars at a time in places; delays will inevitably build at buy times. A landslide last April closed the Chambon tunnel, and hence the D1091 between Grenoble and Briancon, an important access road to Brianconnais resorts like La Grave, Vars Risoul, Montgenevre, Puy Saint Vincent, Pelvoux, Serre Chevalier or Les Orres. While work progresses on a permanent solution, drivers are advised to take the long detour via Gap (N85, N94) or – notionally quicker depending on the traffic and final destination – the A43 from Lyon/Chambery via the Frejus Tunnel into Italy, and back through Montgenevre. Happily, a hefty discount on the swingeing €43.50 one-way tunnel toll knocks it down to €13 for car drivers who can prove they are staying in the Brianconnais. See more at the Serre-Chevalier.com tourist information office.