Eurotunnel seems determined to sell its remaining MyFerryLink vessel despite the Competition authority apparently being open to putting it into service, and the trouble it might cause with the union.

Channel Tunnel reaps rewards despite headwinds on migrants, and the ferry union. 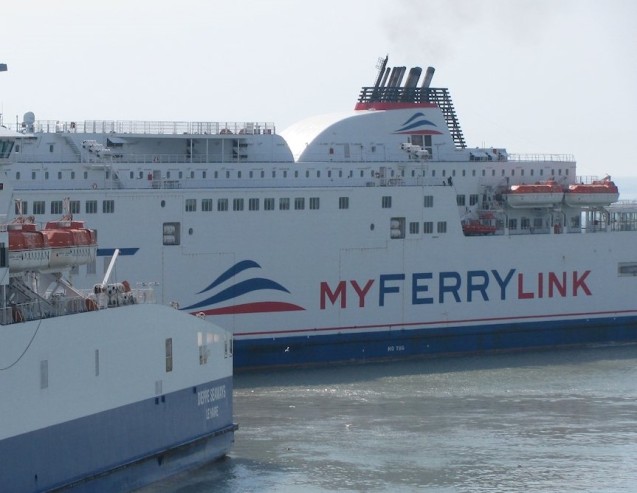 Eurotunnel was absolutely right to say at the presentation of its 2015 results today that, ‘Since the strengthening of security measures at the end of October, the Coquelles site has not experienced any intrusion causing disruption to traffic.’

But while the site itself is secure, traffic queueing on the A16 motorway – specifically trucks – continues to be vulnerable.

After a night of rioting in The Jungle camp, ‘hundreds’ of migrants attempted to board trucks queuing into the terminal at lunchtime today. It was the first disturbance since Christmas Day.

Driver @RoamingMan said on Twitter, ‘Lots of activity around Eurotunnel at Calais. Hundreds of CRS police lining motorway and junctions.’

Still, as with P&O, the situation does not appear to be holding Eurotunnel back, too much.

Revenue increased by 5% last year to €1.222 billion on the back of record truck volumes, though the number of cars fell by 1% (compared to a tourist market which shrank by 2.7% says the firm).

Earlier this week, the CMA Competition and Markets Authority published an update on its recent successful appeal to prevent the Channel Tunnel operator running ferry services from Dover.

However, it repeated its offer to look again at allowing Eurotunnel to run a freight-only service with its remaining former-MyFerryLink ship Nord Pas de Calais.

In a statement it said, ‘The CMA will consider any requests it receives from Groupe Eurotunnel to vary the CMA’s remedy order (including in relation to the Nord Pas de Calais freight vessel).’

This is awkward for Eurotunnel since the decision to sell the ship – putting 150 jobs at stake, all earmarked for former MyFerryLink staff – saw union boss Eric Vercoutre threaten the firm yesterday, shortly after his men blockaded the DFDS berth at Calais.

Eurotunnel is yet to respond publicly to the CMA’s offer.

DFDS is also accused of not living up to promises made to end the strike in the summer. It has apparently only employed 74 of the 202 MyFerryLink staff who were expecting jobs.

The CEO of DFDS France Jean-Claude Charlo told La Voix du Nord he ‘regretted the lack of interest’ shown by the workers. 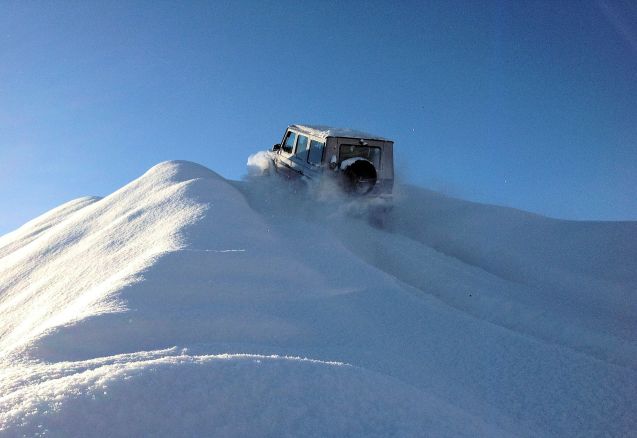 Mercedes’ winter off-road course near Kitzbuehel, west Austria, looks like the real deal. Drivers tackle slopes of up to 80% in and around the stone quarry at Oberndorf. The full range of recently refreshed Mercedes SUVs are available to drive though, clearly, the one to go for is the perennial G-Class, above. The courses run daily from 27 December until 28 February. Prices start at €155 per half day. See more pictures here, or request more information via the Facebook page.

roundup: FRANCE. Ecology minister Segolene Royale wants 1000km of ‘solar roads’ in place within five years. Tests will start this year based on technology unveiled last year by Colas – called Watt Way – which sees solar cells embedded in a road surface tough enough to withstand the heaviest vehicles reports Le Monde. Just 1km of solar road can generate enough electricity to light a town of 5000 inhabitants. NORWAY. A man in Randesund heard his car being stolen in the middle of the night and rushed outside without even getting dressed. In temperatures of -17C, the 25-year old jumped onto the roof as the car sped away and clung on for several kilometres at speeds of up to 90kmh before smashing the back window with his knee and grappling with the thief until the car came to a stop according to The Rakyat Post. ‘It’s not what we advise people to do but now he’s done it, it’s really an incredible story,’ said the local police chief. MADRID. Stuttgart’s ‘dust alert’ which saw drivers asked to leave their cars at home – and residents not to use their fires – comes to an end at midnight on Friday. This week’s Paris pollution episode passed without any major restrictions too. Meanwhile, in Madrid today, the city council voted to ban all cars in the event of the most serious pollution peak reports El Pais English. Two new scenarios have been established, on top of the existing stage one speed limit cut to 70kmh on the M-30 ring road, and stage two parking ban within the M-30. Stage three will be a Paris-style ‘alternate traffic’ depending on the last number of a vehicle’s registration plate. Stage four will be a complete ban of all – at least private – vehicles. We understand the city will also give more notice of the various stages so commuters can plan better – currently restrictions are not announced until early in the morning on the day in question so as not to ban traffic unnecessarily.