PM Matteo Renzi takes the credit for an extraordinary array of new roads recently opened or opening across Italy.

Also, migrants from nearby camp seen around A16 near Dunkirk. Another yo-yo month for road safety in France. Foreign visitors make up a third of Iceland’s road deaths last year. Stockholm indie band crash not deliberate say police.

Mezzogiorno A3 about to join new alternative A1, and Milan ring roads.

A section of A3 Salerno-Reggio Calabria in-build. Photo Strade ANAS

All the big wigs were present today at the breakthrough of a new tunnel on the A3 in southern Italy.

Described by state roads agency ANAS as ‘one of the most important works of the last yard of the A3 Salerno-Reggio Calabria’, the 2.3km tunnel at Mormanno is one of five on this 20km stretch plus eleven viaducts.

Long an opponent of German-backed austerity, PM Mateo Renzi pointedly said, ‘It would be better in Europe if there was more talk of investments. Countries would work better’.

The Mormanno tunnel should be ready to use in December along with the rest of the rehabilitated A3 which runs for 440km from Salerno south of Naples to Reggio Calabria, on the toe of Italy across from Sicily.

Almost entirely realigned to take out the sharp bends which previously denied it full ‘motorway’ status, with at least two lanes in each direction, the new A3 will reduce chronic holiday congestion to and from Sicily and otherwise open up ‘Mezzogiorno’, the ‘almost entirely tourist-free’ part of Italy.

The vast majority is now in use though 58km in three stretches will undergo maintenance this year.

The decades-long work on A3 is called ‘a symbol of slow and Mob-plagued infrastructure projects in southern Italy’ by ANSA news agency.

It hit the news last year after sub-standard works saw collapses in several places which forced trucks on long detours.

Since assuming office in February 2014, Renzi has presided over an exceptional period of road openings in Italy.

The A35 BreBeMi shortcut between Milan and Brescia opened in July 2014 followed by the TEEM Tangenziale Est Esterna Milano which links the major east-west A4 and north-south A1, and A35, to the east of Milan.

Meanwhile the second section of A36 Pedemontana Lombarda, from A8 to A9 across north Milan, opened in November.

Work is on-going on the A59 to the south of Como – two free-flow Dartford Tunnel-like toll sections opened in November – and the A60 ring at Varese.

Most impressive is the new A1 Variante di Valico which Renzi opened with a flourish just before Christmas.

The new 32km stretch – almost all in tunnels – cuts the journey time between Bologna and Florence by 30% and leaves the original A1 as the quieter, scenic alternative.

However, progress is much slower on a new tube for the Colle di Tende tunnel reports The Local Italy.

Originally opened in 1882 as the longest road tunnel in the world, at 3km, Colle di Tende is the cross-border link on the 130km road between Cuneo and Nice, on the French Riviera.

Work started last November but despite 24 hours a day construction, the tunnel has advanced by an average 50cm per day since thanks to unexpectedly soft rock. However it is still expected to be in service by July 2017. 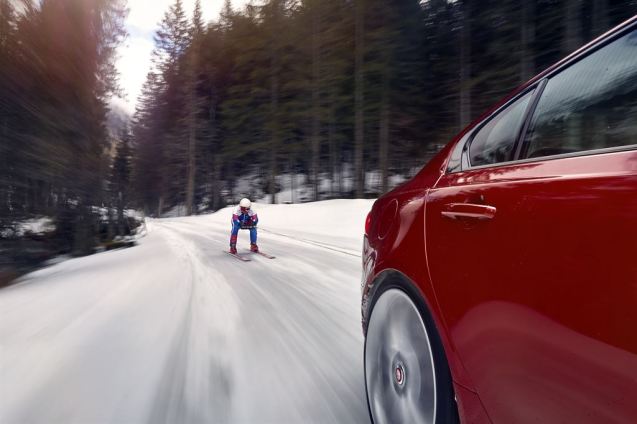 Jaguar is helping Graham Bell train for an attempt on the skiing world speed record. The former British champion and five time Olympian is being towed – or skijored – behind a 4WD Jaguar XE at 100mph in the Austrian Alps. The firm is also designing the aerodynamic suit Bell will wear. During the attempt early next year at Jaguar’s cold weather testing centre at Arjeplog northern Sweden, Bell will be initially skijored before firing up two micro jets that will hopefully take him to 160mph – the existing downhill speed record stands at 156mph.

roundup: CALAIS MIGRANTS. Migrants have already been spotted around the A16 after the new Grand Synthe camp near Dunkirk opened on Monday reports La Voix du Nord. The camp, clearly visible from and right alongside the motorway near junction 54, was not endorsed by national or local government precisely because of its proximity to the A16. Calais police are currently clearing the Jungle camp away from the port access road after repeated attempts to board trucks queuing for ferries by blocking the road. The Grand Synthe camp was set up by Doctors Without Borders with the capacity to hold 2500 migrants. Drivers should be extra cautious in the area. FRANCE. Another yo-yo month for road deaths in February: fatalities increased by a significant 8.4% according to Securite Routiere (after falling by 10.7% in January, and increasing by 7.7% in December). The numbers were skewed by the two school bus fatalities in which eight teenagers died (as in 2015 when the Puisseguin disaster bumped up the overall increase from 1% to 2.4%). Even discounting these tragic incidents there were still 12 more deaths last month than February 2015. The rise is accounted for by a sharp rise in pedestrian deaths, and lesser increases for motorbike riders and car drivers. Meanwhile, in ICELAND, of the 16 people who died on the roads last year, five were foreign tourists reports Iceland Review. Concerns about inexperienced visiting drivers were raised repeatedly last year (the classic scenario is catching wheels at the edge of an icy road). As if to underline the point, three American tourists got into trouble on Wednesday night after their car was stuck in snow in southern Iceland. They continued on foot through snow, heavy rain and high winds and were eventually forced to break into a cabin at 03:00. Fortunately there were no injuries. SWEDEN. Police have officially refuted a suggestion from one investigating officer that the Viola Beach crash in Stockholm last month, in which five men died, was deliberate. A spokesperson told Radio Sweden today, ‘We can say right now that it was an accident and an unfortunate incident. There’s nothing pointing to anything else.’ Also despite reports, the investigation continues for at least another week. Meanwhile, the car’s black box failed to yield useful information, and the search for the taxi whose wing mirror was apparently smashed by the Viola Beach car also continues. The current theory is that the driver was knocked unconscious after hitting a barrier, sending the car out of control.