A drive through Brussels’ notorious Molenbeek, struggling to believe it is Europe’s most deadly suburb.

An innocent drive between Brussels and the English Channel. 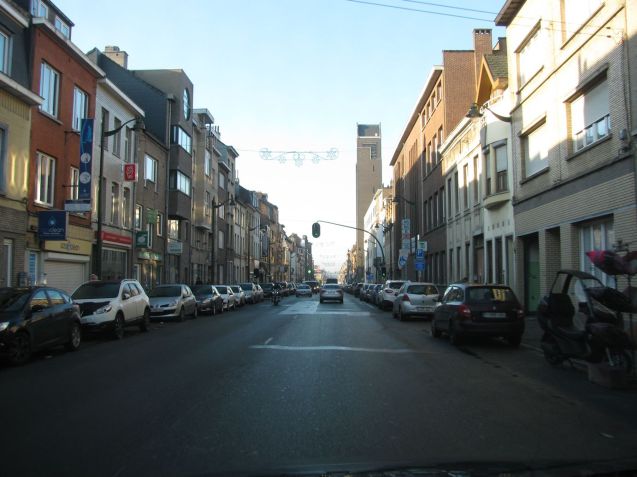 N8 on the border of Molenbeek and Anderlecht with Eglise Saint-Vincent de Paul in the distance.

Since we drove past Srebrenica without stopping, and Auschwitz too, hopefully no-one can accuse us of gore tourism for driving through Molenbeek.

The truth is, Molenbeek is on the direct, cross-country route between Brussels and the English Channel.

The first time we went there, in December 2014, we had no idea of the place’s significance.

By the second time however, a few weeks ago, we had a much better idea.

It starts on the other side of the R20 Pentagon ‘little ring’ road. Grand Place is only a fifteen minute walk away.

N8 curls off from R20 across the wide Brussel-Charleroi Canal, one of the few kinks in what is otherwise a dead straight highway for 30km to Ninove.

It varies only by width – from four, unmarked lanes to two, with or without tram tracks – and is lined almost all of the way with wall to wall buildings.

Knowing something about Molenbeek the first thing that strikes you is how many regular Caucasian faces there are. Not just a few, but lots. Hardly then the homogenous, hardline Islamist ghetto it is painted out to be.

Okay, N8 traces just the southern border of Molenbeek, more or less. But the flat where Paris Attacks terrorist Salah Abdeslam was arrested last week is only a few hundred yards from the peculiar Place de la Duchesse de Brabant square, the first landmark on N8 driving out of the city.

The square is set at an angle to the road in a diamond shape, each side about 100m long, with a spired church at the west corner, next door to a finely proportioned, stucco school building with a columned grand entrance.

Dotted with healthy birch trees, it would be quite attractive except for the tram tracks and road running right through the centre. If ever there was a place for one of Brussels’ famous tunnels it is right here.

Saying all this, there are obvious signs of dilapidation a little further up. On the right is a patch of scrubland and behind that the magnificently decrepit old Vandenheuvel Brewery building.

There are high arched doorways on the ground floor, an elaborate portico out onto the park and smashed windows on the upper floors.

It was tentatively sold for housing a few years ago for €1.7 million to a slum landlord with previous convictions for involuntary manslaughter, according to Brussels Nieuws, though the deal apparently fell through.

Meanwhile, on a side street behind Brussels-West train station a little further up is an interesting row of stone-clad, twelve storey apartment blocks, all overlooking Marie-Jose Park.

The one nearest the road has a curved end and characteristic Art Deco metal window frames.

The really stand out building however is the Eglise Saint-Vincent de Paul, another Art Deco, though with a distinct flavour of overbearing, totalitarian Brick Expressionism.

Opened in 1937 and designed by Joseph ‘Josse’ Smolderen – who also had a hand in the Boerentoren tower in Antwerp, Europe’s first skyscraper (and still the city’s highest building) – it features a sinister, almost featureless, square bell tower set away from the church, right on the road.

Actually, Saint-Vincent de Paul is just over the border of neighbouring Anderlecht though Molenbeek kicks in again after another kilometre, just before N8 crosses the R0 Brussels ring road.

Apparently, one of the features that makes Molenbeek such an attractive operational centre for terrorists is how well connected it is.

Perhaps another one is that it just doesn’t look like what it is. 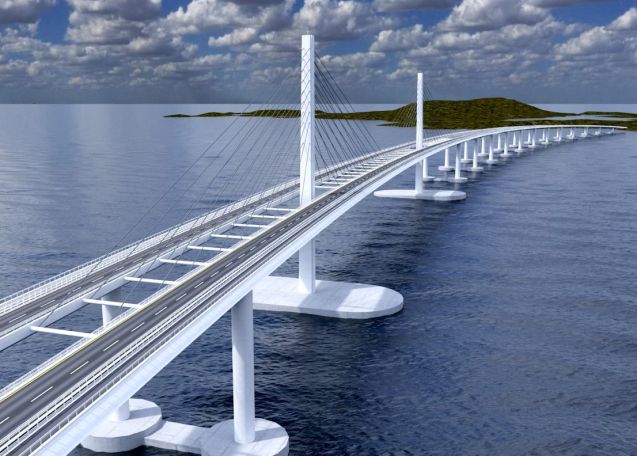 Norway is planning the world’s longest floating bridge to cross the 5km wide Bjørnafjord in the south west. A depth of up to 550m makes conventional crossings impossible. The bridge is part of a ‘mega-project’ to establish a ferry-free coastal motorway between Kristiansand and Trondheim – dubbed Ferjefri E39 – over a distance of around 1250km. The Norway National Transport Plan 2014-2023 says E39 needs to be realised within the next 20 years according to national roads manager Vegvesen. Picture via COWI

roundup: FRANCE. Hauliers concerned about unfair competition from abroad are planning a national day of action for Saturday 9 April. Organised by the OTRE union, they want stricter and better resourced controls on light and heavy vehicles, and a change in regulations to allow authorities to cross-check waybills and vehicle loads according to an open letter. Most particularly they want EU Regulation 93/3118 Article 7 invoked which allows EU countries to suspend cabotage regulations for a renewable six months – the rules which govern the amount of work foreign trucks can do in other EU countries. Saturday 9 April is not expected to be an exceptionally busy day on the roads in France but, like all Saturdays in April, there will be some school holiday traffic according to Bison Fute. CALAIS MIGRANT CRISIS. An extraordinary number of migrants were discovered in the back of trucks in Kent today, 52 in total according to Kent Online. Half were found in the back of a Romanian-registered vehicle in Canterbury after arriving from Spain (driver later released without charge), and the rest in an unidentified truck of undisclosed origin in Dartford. By our reckoning that’s by far the most migrants discovered in one day since the dark days of summer, and it’s not clear why. Meanwhile, Labour Shadow Home Secretary Andy Burnham called for Calais-style juxtaposed border controls in Belgium following the Brussels Attacks. In response, Home Secretary Theresa May said discussions have already been held with Belgian ministers, before the attacks, about ‘how Border Force operates at certain ports and how to enhance and increase the ability to act’. She also warned travellers to expect delays this weekend due to increased security, particularly at the Channel ports. ITALY. A terrific landslide at the weekend – which seriously injured one motorist – will see Via Aurelia closed for at least the next two months reports Bradt Guide author Rosie Whitehouse. The ancient Roman route, which starts in Rome and is now numbered SS1, was shortly to host a bike race on the stretch between Genoa and Savona at Arenzano on Saturday before the incident. The race was rerouted via the nearby A10 autostrada. Locals will get a 70% discount on A10 tolls in the meantime.