All of Germany’s 150 ‘Scenic Routes’ are now collected together online.

Also, Gotthard Tunnel shut every weeknight this month as Swiss voters reject new road fund but accept new Geneva ‘lake crossing’. And, Norway has not decided to ban fossil-fuelled cars by 2025 (and neither has the Netherlands). A bad weekend for coach travel, including a random shooting from a bridge in France. Soldiers bolster checks at Dutch ports.

From the Romantic Road to tree-lined avenues, and open cast mines.

Photo Ramsauer Church, on the Alpine Road via Germany Travel.

All of Germany’s 150 brown-signposted official ‘Scenic Routes’ have been assembled on one webpage by the national tourist agency.

The routes criss-cross the country, from less than 100km to nearly 3000km.

Each profile includes a map as well as places of interest along the way.

The best known include the 450km German Alpine Road from Lake Constance almost to Salzburg via Hitler’s Berchtesgaden.

And also the Baden Wine Route through the Black Forest, and the Romantic Road from Wurzburg to the fairy tale Neuschwanstein Castle near the Austrian border at Fussen.

However, the routes cover more than just natural history.

Eye-catching alternatives include the German Avenues Route, 2900km from Rugen on the Baltic to Lake Constance, all on tree lined roads.

Or the Bertha Benz Memorial Route from Mannheim to Heidelberg, the first ever road trip.

And why not the ‘Energy Route of Lusatian Industrial Heritage’? This takes in 250km of post-industrial landscape such as former open cast mines, and power stations, north of Dresden.

Especially intriguing is the Thuringia Route of Human Rights and Democracy, marking out significant sites of protest through Germany’s two 20th century dictatorships. 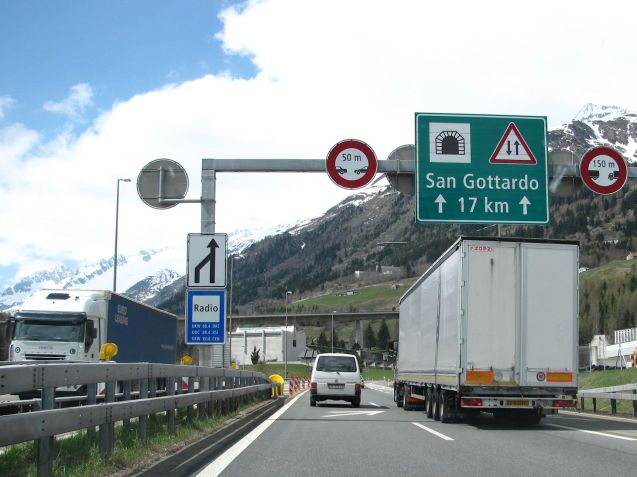 Switzerland’s Gotthard Tunnel shuts overnight for maintenance every weekday this month reports TCS, Monday to Friday, from 21:00-05:00 (6-10 June, 13-17 June, 20-24 June and 27 June-1 July). Meanwhile, Swiss voters yesterday overwhelmingly rejected a plan for a new road fund. Backers had wanted all road taxes spent on maintaining and improving the road network, and the CHF1.5 billion ‘milked off’ for other services to be retained. However, more than 70 percent said no. The govt wants a new fund comprised of vehicle taxes plus increased taxes on fuel says Swiss.info. Voters in Geneva also voted for a new ‘lake crossing’, either bridge or tunnel. No specifics are available yet but one front-running plan is a 4km tunnel from the A1a off-shoot on the west bank to just south of Collonge-Bellerive. A lake crossing was previously backed by voters in 1988 but failed to materialise says @WRS though it is included in the Canton’s transport plan to 2030. Photo @DriveEurope

roundup: NORWAY. Contrary to intense international excitement at the end of last week – particularly by EV pioneer Elon Musk – politicians have not decided to ban the sale fossil-fuelled vehicles by 2025. A press release from the Conservative (Høyre) party – which leads the governing coalition – called the reports ‘misleading’ says The Local Norway. ‘The government and its partners agree on a new step on the way towards a low-emission society… but there is no talk of banning the sale of diesel and petrol vehicles in 2025,’ it says. Instead it seems the parties have only agreed on targets for low emission vehicles. Similarly misplaced excitement greeted the news in March that the Netherlands had decided to ban conventionally powered vehicles by 2025, but that turned out to be just a motion passed by the lower house of parliament. COACH TRAVEL. Six passengers were injured including one seriously after a gunman fired twice at a coach on a motorway in southern France on Saturday night. The coach was full of Czech nationals returning home after a holiday in Spain when the shots were fired from a bridge on the A7 near Saulce-sur-Rhone, twenty miles south of Valence, reports Le Dauphine. The injuries were caused by shattered glass. A woman was seriously injured in the eye. The shots were probably fired from a hunting rifle says Reuters. No motive has been established. Meanwhile, two passengers were killed and 49 injured after a coach collided with a parked truck early on Sunday on a minor road near Montoro, north east of Cordoba in southern Spain says Teletica. And fifteen people were killed when school bus fell into a canal outside Osmaniye near Adana in southern Turkey reports DHA. NETHERLANDS. Soldiers will bolster checks on vehicles crossing to the UK through Hoek van Holland, Europoort and IJmuiden says DutchNews.nl. At around 500, the number of stowaways caught in the first four months of the year matched the entire total from 2015. Nearly half were Albanian and more than a hundred were from Afghanistan. However, there is apparently no evidence to say migrants are moving north from Calais.