In a worrying escalation, migrants halt traffic into Calais port in broad daylight.

Traffic halted during the day for the first time in a long time.

Drivers heading into Calais port overnight have been running a gauntlet of migrants for many months.

But this afternoon’s brief stoppage on the port motorway is the first daytime incident for a considerable time.

As such it signals an unwelcome escalation as migrant numbers in the nearby Jungle camp climb past 10,000.

Ben Shore said, ‘We can see armed police taking refugees from a lorry…’

Sue MacKenzie, P&O Ferries Operations Director said, ‘The safety of our customers is our absolute priority. Every passenger using the Port of Calais has a right to expect a secure, safe and efficient passage. We will continue to do everything we can with the French authorities to ensure a safe and secure environment.’

Local newspaper La Voix du Nord said the N216/A216 ‘rocade’ ring road into the port was the focus of the incident as migrants took advantage of heavy mid-week traffic – but also that some fires were lit close to the A16 motorway.

‘Usually, they do it at night but this time it’s during the day,’ said one resident.

The disruption lasted around ninety minutes with traffic resuming around 15:30CEST.

Today’s incident comes ahead of a planned all-day blockade of the A16 by French hauliers, and others, next Monday.

Presciently perhaps, one trucker told @DriveEurope yesterday the demonstration would be ‘carnage’ as the migrants ’will have a field day with all the trucks going slow along the A16.’ 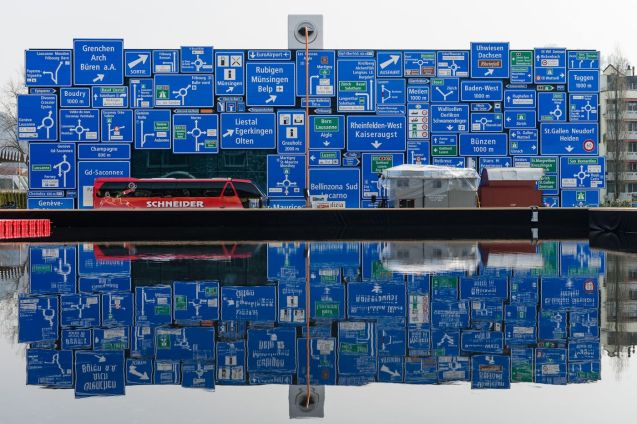 The Swiss Museum of Transport in Lucerne features a ‘sign wall’. Photo Verkehrshaus.ch