Border country. Smallest of the ‘five ‘Stans’ Central Asian republics, Tajikistan is 90% mountains and 50% above 9,800ft. At nearly 4,200 miles by road from London – via Moscow – strictly speaking this is not Europe… but it is only just east of the mythical line drawn south from the Urals.

We tag along with a Foreign Office delegation on the 195 mile drive from capital Dushanbe in the west to second city Khudzand in the north. Click here for the route. 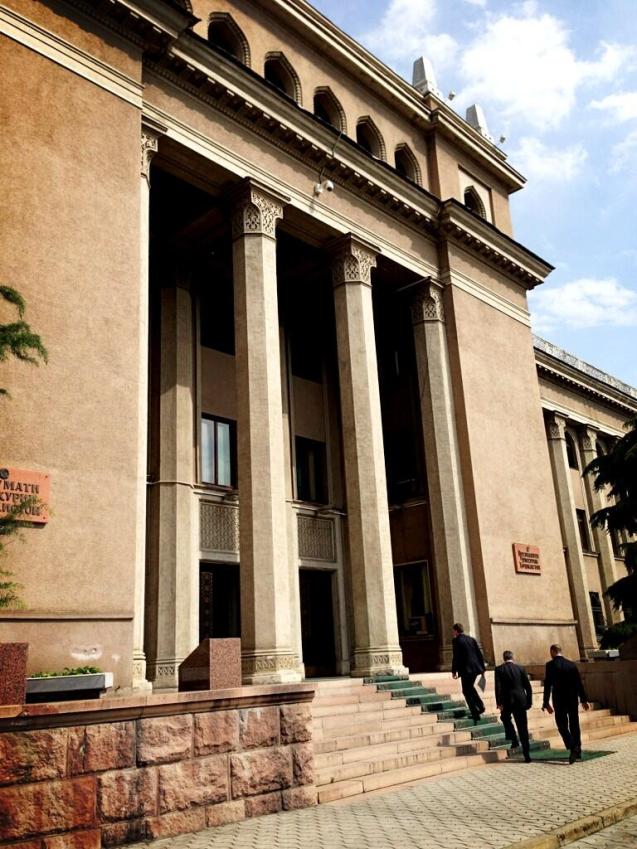 The first ever UK trade mission to Tajikistan visited last week. Leigh Turner – Regional Director for Trade & Investment for Turkey, Central Asia and South Caucasus – and Foreign Office colleagues are there to follow up. Here, on a visit to the economic advisor to President Rahmon, in power since 1994. 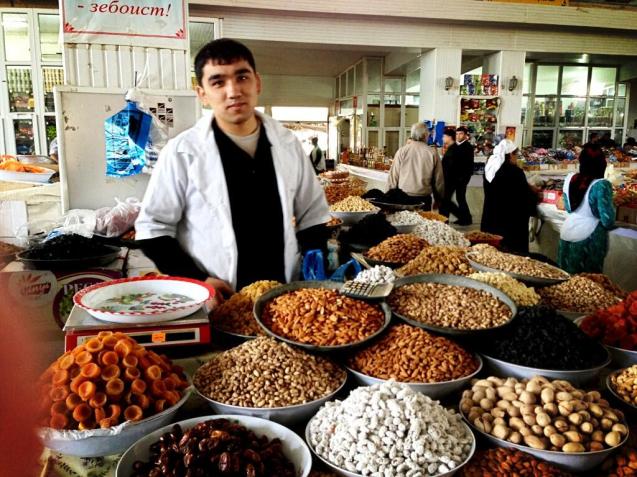 Bordered by three of the other ‘Stans (Turkmenistan, Uzbekistan and Kyrgyzstan) and also Afghanistan and China, Tajikistan also comes literally within a few miles of Pakistan. The Tajik government has recently signed an agreement to allow British military equipment from Afghanistan to transit the country. Tajiks are one of the Persian speaking peoples, like Iranians and Afghans. The dominant religion is Sunni Muslim. 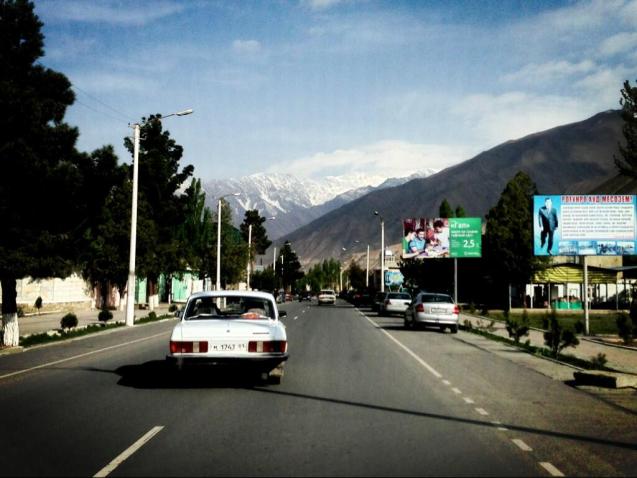 Dushanbe, population 680,000, is 2,316ft above sea level and four hours ahead of London. Currently 22°C and sunny. The Tajik climate varies depending on the elevation. In general summers are long and hot with short cold winters. In common with other Central Asian countries the issue is lack of rain. 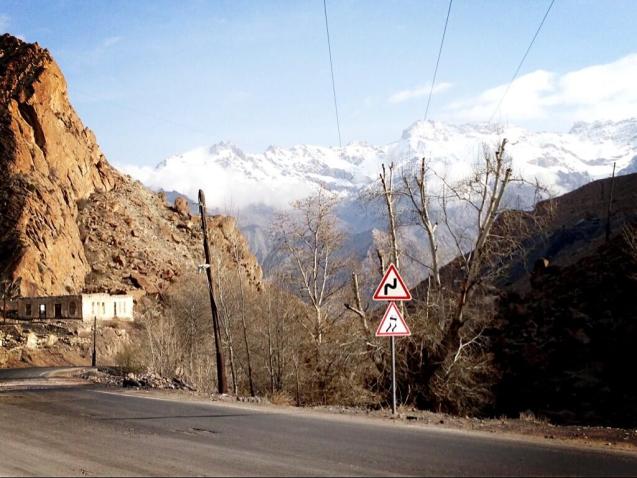 The M34 road north towards Khudzand crosses the western edge of the Pamir mountains. The Pamirs are at the junction of several ranges including the Himalayas and the Hindu Khush. Despite peaks reaching around 15,000ft, the western part of Pamir is significantly lower than the east. 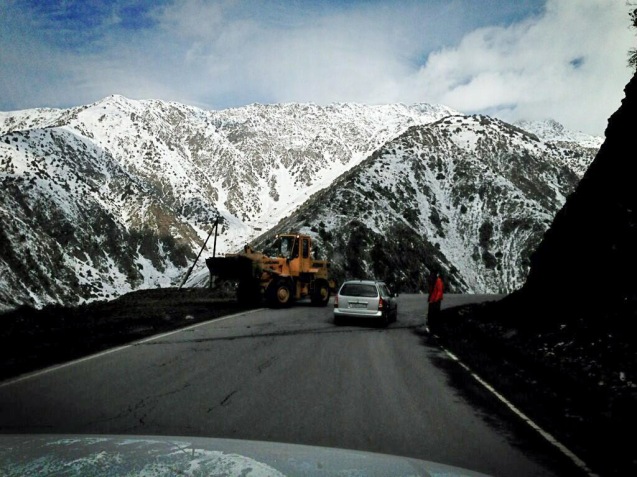 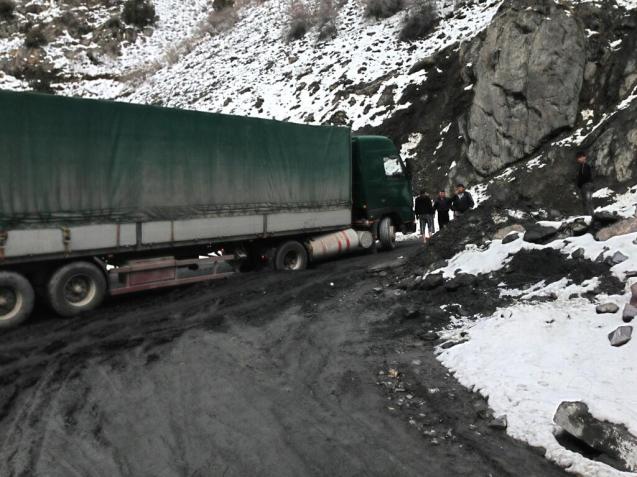 A lorry is stuck at the entrance to the Istiqlol Tunnel, known locally as the Anzob Tunnel or the ‘Tunnel of Death’. Three miles long, 50 miles from Dushanbe. Opened in 2007. Built and financed mainly by Iran. 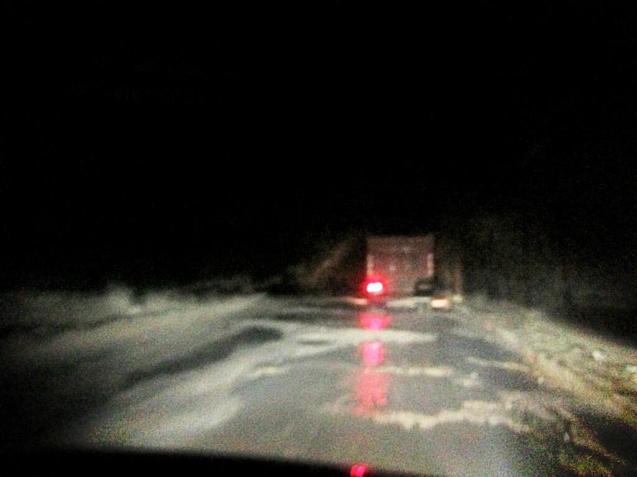 Istiqlol is still to be paved, drained and ventilated but these are mere details when it means people can drive between the two largest cities in most weathers without detouring through Uzbekistan as previously. 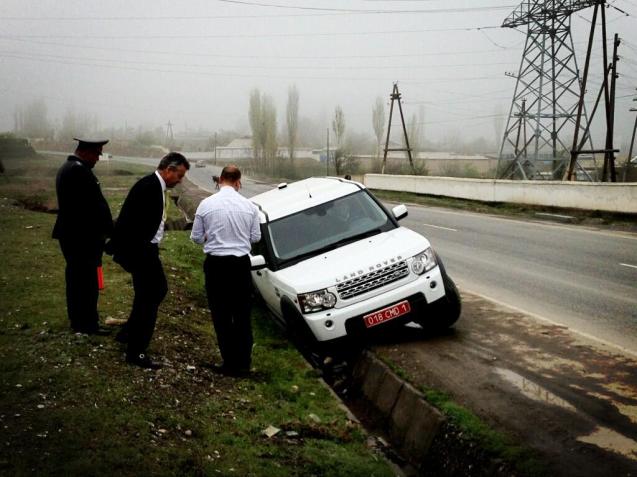 “Another driver’s manoeuvre… Evasive action… We’re in the ditch : ( “ 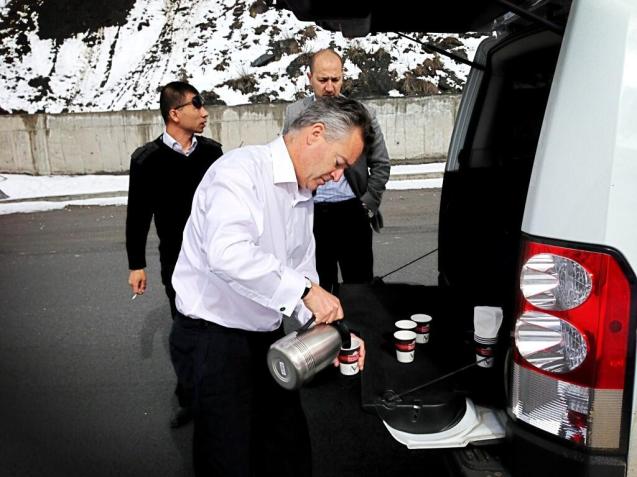 Time for a nice cup of tea, organised by HM Ambassador to Tajikistan, Robin Ord-Smith. They didn’t have to wait long for a tow. 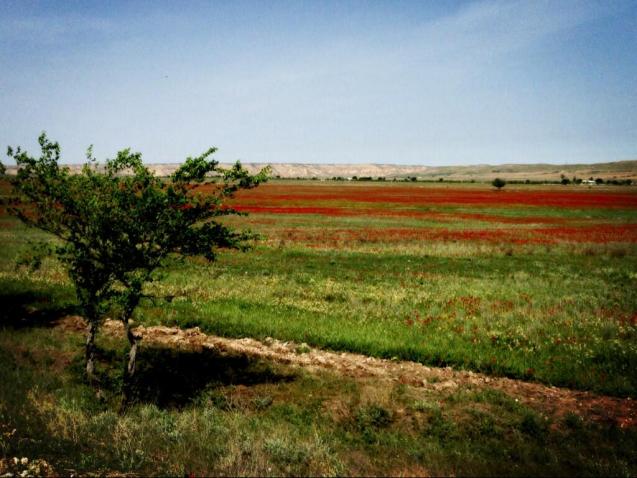 Poppies in Fergana valley. Tajikistan is a major transit route for ‘opium products’ from Afghanistan. Legitimate industry includes cotton, aluminium and hydroelectricity. The 1,000ft tall Nerak Dam, 47 miles east of Dushanbe, is the world’s highest. Over a third of GDP comes from money sent home by the one million Tajiks who work abroad. The total population is 7.3 million in a country just over half the size of the UK. 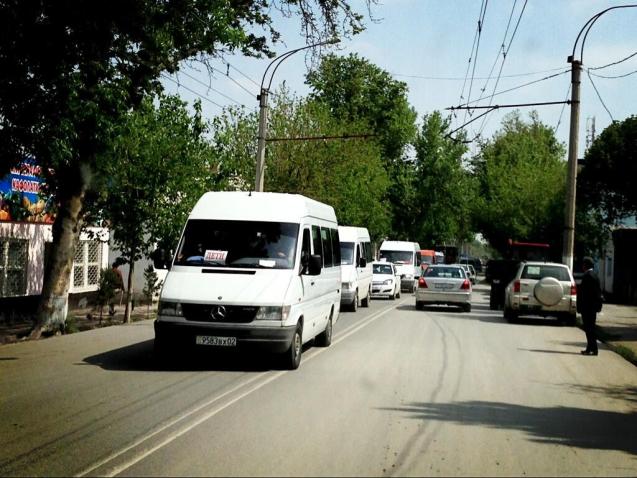 Khudzand – or Khujand, formerly Leninabad – sits on the Syr Darya river at the mouth of the Fargana Valley. Capital of the northern province Sughd. Major staging point on the ancient Silk Road. 100 miles south of Tashkent and 175 miles east of Samarkand. Height 1,000 ft. 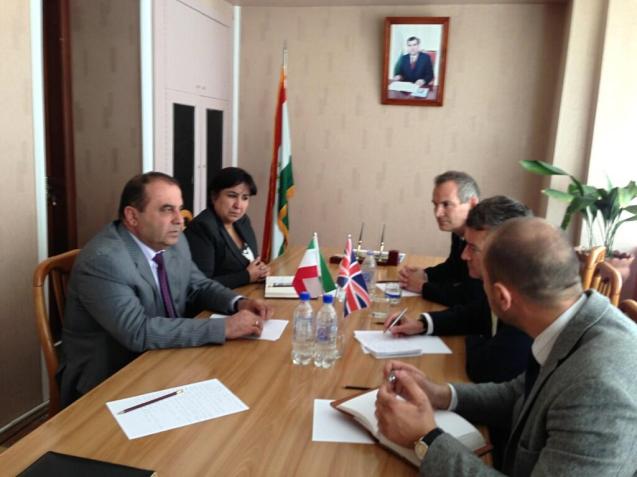 Tajikistan was devastated by a civil war after the collapse of the Soviet Union but has been peaceful since 1997. This year, according to the Deputy Governor of Khudzand, left, the region grew 8.2% in Q1 2012 while the country as a whole grew by 7%. Leigh Turner is third from right. 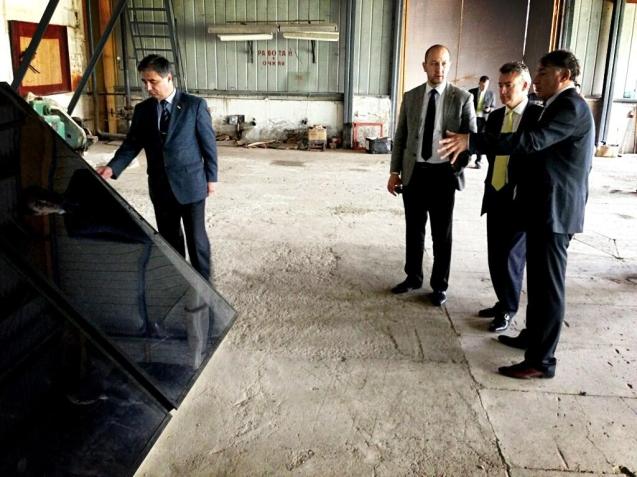 The visit takes in the Free Economic Zone near Khujand which includes factories making solar panels, paint and window frames. Businesses say they are ‘desperately short of trained staff’, one area in which the UK can help. 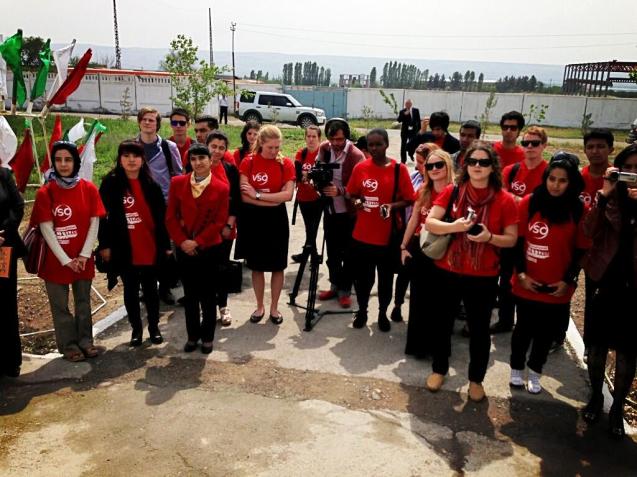 The VSO charity – Voluntary Services Overseas – has been working in Tajikistan since 2008 ‘with marginalised youth and women from low income households to make sure vulnerable people and communities are benefiting from economic growth.’ VSO also runs an ‘ethical tourism’ programme. 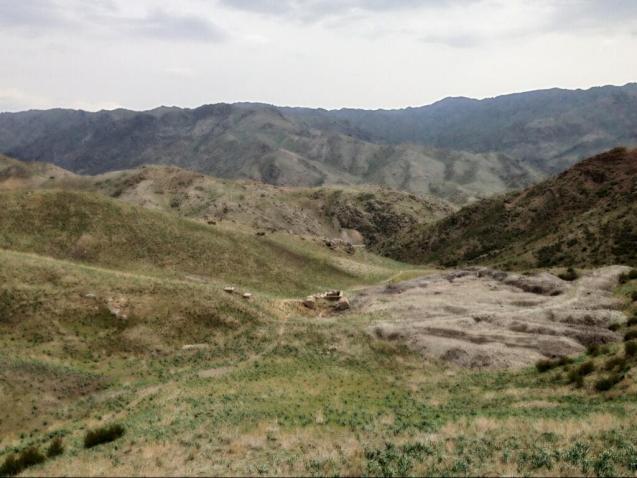 Silver mining has been ongoing in Tajikistan for over a thousand years though these mine tailings are more modern. An existing Western investor in Tajikistan is Silverhill Resources, a Swiss based company, which holds a licence for the Kanjol Ore Field in northern Sughd. Tajikistan also has deposits of gold, antimony and a long list of other metals as well as coal. 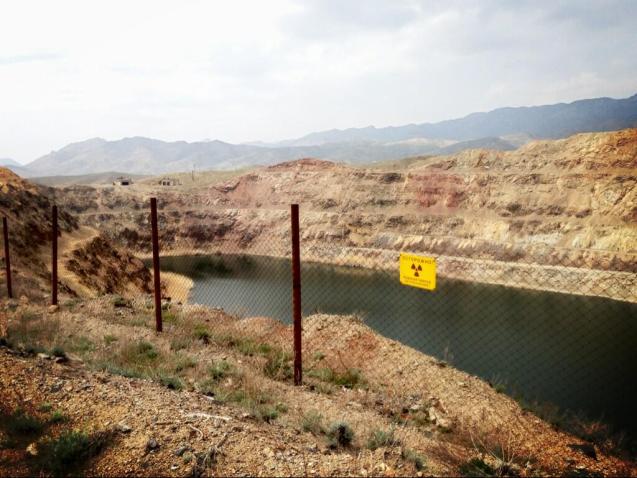 Like many of its neighbours, an important industry in Soviet times was uranium mining but it has substantially diminished since. The size of the remaining uranium deposits is a state secret. The US has been closely involved in combating nuclear trafficking. Tajikistan is a signatory to all the international treaties and organisations. The biggest problem is dealing with the 55 million tons of radioactive waste..

For more information on the UK in Tajikistan click here.

For more information on VSO in Tajikistan and tourism click here.

All photos © Twitter/ @LeighTurnerFCO but all research and text solely by DriveEurope. For our previous coverage of Leigh Turners travels see ‘Across the Sea of Marmara with Our Man in Istanbul’.