Rolls-Royce commemorates its landmark victory in the 1913 Alpine rally with a special edition Ghost, and a rerun of the original route across the mountains of central Europe.

What was once a relentless test of man and machine is now an exhilarating drive on some of Europe’s most spectacular roads.

Rolls Royce marks the centenary of its landmark Alpine Rally victory with a ‘Bespoke’ limited edition of its Ghost saloon. Featuring the special shade of blue worn by the 1913 works team and gloss black wheels and grill (apparently ‘the first time a painted grille has adorned a contemporary Rolls-Royce motor car’).

It was Rolls-Royce’s dominant victory in the 1913 Alpine Rally that first allowed it to use the title ‘The Best Car in the World’. Only on the final leg of the seven day event did its cars fail to finish in the top four positions (and even then only after a dubious crash).

The 1,820 mile course – taking in northern Italy and modern day Slovenia as well as much of Austria – was a severe test of engine, gearbox and brakes, tackling inclines of over 27%. But the cars – modified road cars not purpose built racers – had other requirements to satisfy, like starting the engine within one minute.

Needless to say, racing improved the breed. The resulting technical solutions, some still in use many years later, embedded Rolls-Royce as ‘the pre-eminent manufacturer of modern motor cars’.

The fascia of the 2013 Alpine Trail Centenary Collection Ghost has an inlaid graphic of the altitude of the original Alpine Rally, up to 7,500ft.

Even today, nearly two thousand miles on mountain roads in a week would be challenging. In 1913, on unmetalled and even unmade surfaces – and absolutely no barriers – the mind truly boggles.

Mercifully, the 20-Ghost Club – for Rolls built before 1940 – has allocated a civilised fortnight for when it recreates the route in June.

Over 40 Rolls-Royce Silver Ghosts – including a 2013 Alpine Trial Centenary Collection Ghost, and the 1913 winning Silver Ghost – will take part.

Like the original, the Centenary run starts and finishes in Vienna, tracing a big irregular loop to the west and south with two offshoots, one to Lake Garda and the other to the shores of the Adriatic at Trieste.

Not all of the original roads are still in use, replaced by tunnels, railway lines, footpaths and even motorways but the essence remains. The mountains of course have hardly moved at all.

The first leg is west, from Vienna to Innsbruck, 335 modern miles along the Central Eastern Alps. In 1913 however it was 520 miles, via two particularly steep passes – Tauern at 22% and Katschberg at 27.5%.

Tauern, ‘the oldest road in the Alps’ is now autobahn but Katschberg is still open, a few miles east on the B99. Then as now, the Brenner Pass into Innsbruck is a gentle affair albeit with wonderful alpine scenery.

The 2013 route, which deviates via Salzburg and Strass to Innsbruck, rejoins the original course west, on an easy crossing into Italy on the Reschen Pass towards Merano.

The subsequent 150 mile descent from the mountains to scented, lush, green, rolling hills and the shores of Lake Garda will be idyllic in the early summer. 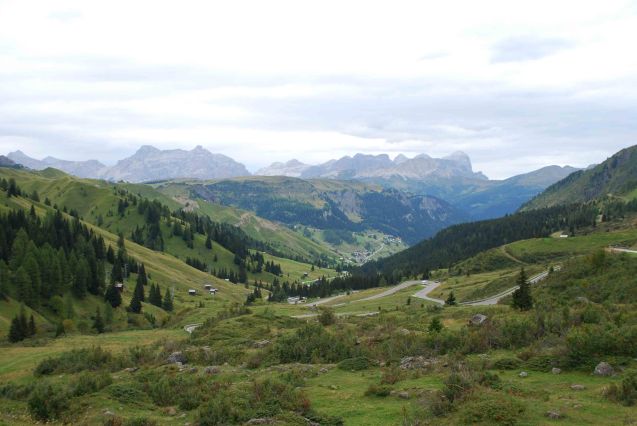 The top of the Pordoi Pass in the High Dolomites, northern Italy, looking east.

Turning east to the popular Pordoi Pass in the High Dolomites, the challenge will be traffic. It gets stop-start in this direction during the holidays but once past the summit (7,346ft) quietens down considerably.

The road ripples across a series of mountain groups on the way to the ever glamorous Cortina D’Ampezzo, the impeccably suitable setting for the James Bond film ‘For Your Eyes Only’.

The next 120 miles shadows the Austrian border to the north along the Gail River Valley to Villach on the banks of the Drau (Drava).

So far, so absolutely classic mountain roads. For us though this is where it gets really interesting as the route drops down and back in a sharp V to the Adriatic via Slovenia.

The drive south crosses the Slovenian border on the Wurzen Pass into Kranjska Gora – the Alpine World Cup venue – before skirting Triglev, at 9,396ft Slovenia’s highest mountain. It drops into Italy on the Predil Pass to Gorizia before taking the coast road into Trieste, past Miramar Castle.

The way back, to Klagenfurt, initially up the steep, harsh Karst to the north of the city – a drive immortalised by the eccentric travel writer Jan Morris – carries on past Lubljana and Lake Bled before the steepest section on the entire course. The Loibl Pass back in to Austria rises 2,300ft in three miles.

Ultimately, this Adriatic leg is a 225 mile diversion that lands drivers just 25 miles from where they started at Villach. But what a journey!

The Julian Alps in southern Slovenia.

On the final leg, after a glorious 180 mile traverse of the Central Eastern Alps, almost at Vienna – on what was even then a fast run – one of the 1913 works drivers had a mysterious crash with a competing car, though one driven by a non-competitor and which had previously ‘harassed’ two team mates.

Despite extensive damage, the Rolls limped into Vienna though the incident hardly took the shine off a famously dominant performance.

It could be depressing that the Alpine Rally can no longer trace its original route. But make no mistake, even now this is no gentle flutter through an emasculated landscape. The beauty is, you no longer have to be driving a Rolls-Royce to enjoy it.

Getting to Vienna. Presumably – and it’s a rather big assumption – most of the priceless old timers taking part in this year’s rally will be air, rail or road freighted to Vienna with their owners joining them by plane.

But those lacking that kind of budget should not despair of tackling at least part of the Alpine Rally route in their own cherished set of wheels.

At 900 miles from London, a good run will see many people reach Vienna in a day and a half*. That’s committed motoring, but it’s direct motorway all the way with the majority on derestricted German autobahn. For somewhere interesting to stop over, the historic cities of Wurzburg, Nuremberg and Regensberg lie at regular intervals from about halfway.

We would be tempted to drop the Garda leg to cut down the time and mileage but would not recommend missing the detour through Slovenia. Not only has the unreconstructed Trieste retained its Cold War atmosphere, but the two legs through Slovenia are an ideal way to get a sense of this beautiful, underrated country, without committing to learning the lingo.

Postscript: Click to read the official tour diary. The actual tour called in at the Adriatic at Opatija in Croatia.

* In September 2013, Top Gear magazine drove from Berkshire to Vienna in 12h49. In a Rolls-Royce Wraith.

3 thoughts on “The Rolls-Royce route through the Alps”