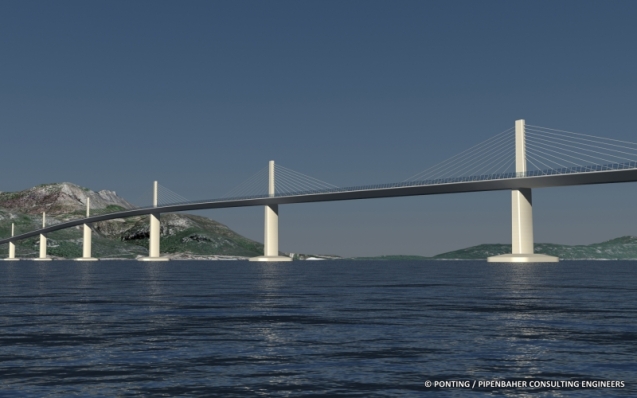 A design study for the Peljesac Bridge by Ponting.si, Slovenia

The on again/off again Peljesac Bridge is on again following a visit to the region by European Transport Commissioner Siim Kallas this week.

The bridge would connect the Croatian mainland to the Peljasac peninsula, see below, and thus by-pass the Bosnian land corridor which cuts off the southern Croatian annexe.

Bosnia has long been nervous of a bridge here as it could hinder access to the country’s only port. Croatia is very keen because a bridge would join up its territory.

Siim Kallas was in Croatia for two days this week to discuss transport projects.

Construction actually began on a 35m high bridge in 2005 before being cancelled during the financial crisis. The most recent proposal is for a 50m high crossing.

The issue gets more live as Croatia joins the EU and Croatia‘s border becomes the outer border of the EU.

The Croatian foreign minister was quoted this week saying a part EU funded project had identified the bridge as the best option though an EU spokesman later said studies were not yet complete.

See our previous piece on crossing the Bosnian land corridor.

One thought on “Peljesac Bridge back on the agenda?”