News: All going to plan on the Channel – Quieter Italian motorways – driving in the Flemish Ardennes – Ireland cross-border bridge suspended.

To celebrate the 120th anniversary of Moscow’s GUM department store on Red Square, Porsche has brought out a limited edition of its 911, the GUM: painted pascha red, mahogany interior, beige seats, based on the 4S. Russia only. That’s it.

Weather in brief – hot and sunny again, but heavy rain in the Alps and showers in the very north.

Crossing the Channel: No operators currently reporting any delays.

From @Port_of_Dover today: ‘Here in Dover sea conditions in the Channel are slight, with a NNE breeze, force 5, and the visibility is good.’

Latest @CF_travel_news forecast: ‘The current forecast indicates slight conditions during the week ahead.’

See our Traffic/Travel/Weather page for the latest. 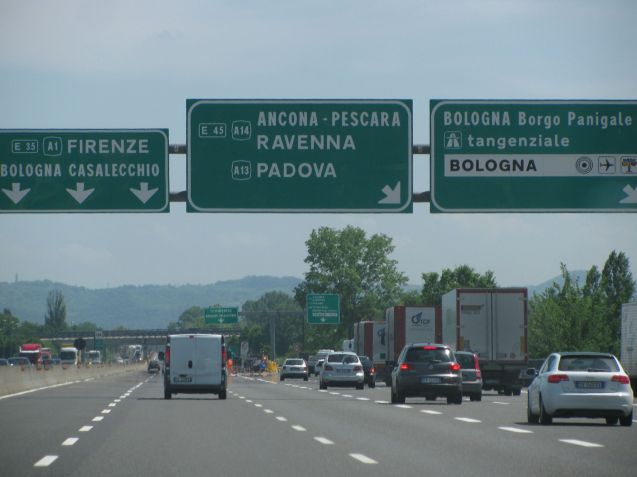 Traffic levels on Italian motorways fell by 7.2% in 2012 compared to 2011, the largest fall since the recession began according to AISCAT, the road operator association. That’s a significant reduction. Just 5% less traffic on a congested road is widely reckoned by the traffic planning industry to be enough to solve the problem. By contrast motorway traffic in the UK grew by 1% in 2012 according to the DfT.

UK – Home Secretary Theresa May has set out which of the 130-odd Justice & Home Affairs measures the UK will opt back into as per the Lisbon Treaty. Read her speech here. The explanatory document published alongside is impenetrable: 110 pages long, written in fine legalese. We’ll look out for some expert analysis. In the meantime, according to The Guardian the UK will not be a part of the Prum Treaty, one of the agreements which includes sharing car registration data. MPs will debate the whole issue next week, and again after the opt-in negotiations with other EU member states.

Italy – phase one of the programme to limit private vehicles on the road around the Colosseum and Imperial Forums in Rome starts on 30 July, mayor Ignazio Marino tells Ansa news agency. The speed limit for buses and taxis will also be reduced. The Colosseum is to undergo a €25 restoration, starting at the same time, controversially funded by Diego Della Valle, owner of designer driving shoe manufacturer Tod’s.

Belgium – Rene Michiels started as an apprentice but by 1990 had worked his way up to become the official franchised Aston Martin dealer for Belgium, with premises in Antwerp and Tisselt. He died in 2010 but each year since has seen a ‘Memorial Rene Michiels Rally’. This year 100 cars took part – fitting for Aston’s centenary – driving from the market square at Oudenaarde to Kasrteel Steenhout through the Flemish Ardennes west of Brussels.

Republic of Ireland – a blunt pencil perhaps? Or maybe a zero got lost in the count. Either way it’s hard to account for the yawning discrepancy between the estimated and actual costs of the planned 195m cable stayed bridge across the River Newry, and the Northern Ireland/Eire border. Having allotted €17.4m to the project, mainly from the EU, councillors were shocked to see the tenders range from €26-40m, plus VAT. Upwards of €1m has already been spent on the project. In a final twist it seems unlikely alternative financing can be arranged before the time-limited EU offer is withdrawn.

Belarus – a new factory to build road building machinery will be commissioned in Venezuela by Belarus manufacturers. The two countries apparently have a long standing bilateral relationship. The new venture joins a brick block factory and assembly facilities for tractors and vehicles says the Belarusian Telegraph Agency.

Turkey – after some days without protests, police were out in force over the weekend in Istanbul. See latest FCO travel advice. British Embassy staff found six tear gas cannisters in the grounds on Sunday morning and six more this evening.

Bulgaria – continuing anti-govt demonstrations, day twenty five today. The British Embassy says, ‘There is a small risk of violence. Avoid large gatherings in public spaces and follow local media and the advice of the local authorities.’ For the latest FCO travel advice click here. For Bulgarian news in English see www.Novinite.com or @novinite_com on Twitter.