Fuel prices – the UK has the ninth highest petrol price and the third highest diesel price according to the AA Fuel Price Survey for August. Average unleaded 95 was 137.5p/l and for diesel 141.9p/l. The Continent’s cheapest diesel, as ever, was in Luxembourg (the AA doesn’t list Andorra) costing 103.27p/l. The most expensive is Norway, 151.78p/l, followed by Italy, 142.19p/l. Most expensive regular petrol was again Norway, 167.01p/l, then the Netherlands, 156.01p/l. Cheapest is Romania, 107.51p/l. Click to see the full list.

Prague. Three major leaks, massive cost overruns, unauthorised construction, uncovered archaeology, undermined buildings and now, it has been announced, a police investigation into its finances. The Blanka Tunnel Complex has enjoyed a gestation fairly typical for any massive infrastructure project it seems. When it opens next Spring however the Complex, three consecutive tunnels completing the Prague Inner Ring in the north west of the city, bypassing the historic centre, will contain Europe’s longest city tunnel, at 3.09km. For more see www.tunelblanka.cz

France – inevitably, the big improvements in road safety seen earlier in the year fell significantly over the Summer. July and August traditionally account for 20% of fatal road accidents in France. Road deaths were down just 3.3% in August compared to the same month in 2012 (they were down by nearly 30% in May). However, total fatalities for the year so far are still 13.3% less than 2012. The number of hospitalisations though jumped by 6.6% in August though they are down by 3.4% overall this year. The govt has a target to reduce road deaths to 2,000 by 2020, from 3,645 in 2012. The figures from the summer seem to suggest that the strategy – a sharp crackdown on speeding – is working. The biggest gains this year were seen after the introduction of unmarked Renault Megane radar cars in March. Harder to judge is traffic density. Record jams – of nearly 900km in total at one point – were recorded in August but that includes all jams, as opposed to the previous record of 800km set in 2007 when only major stoppages were included. 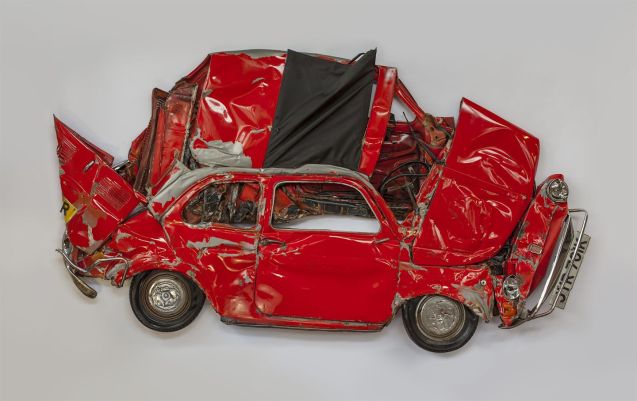 ‘Pressed Flowers’. We’re a bit late to this, but designer/artist/architect Ron Arad has crushed six Fiat 500s in a 500 tonne industrial shipyard squisher. On display currently at the Holon Design Museum in Israel (kind of Europe). No word if and when coming to this side of the Med. The idea he says is to turn something functional into something useless, the opposite of what he usually does, but rather than destroy the cars, to immortalise them. See more at www.ronarad.co.uk.

Roundup: Bulgaria. Pity the poor guy who took it upon himself to direct traffic in central Sofia when traffic lights broke down. He’s been praised for his bravery but slapped with a €153 fine which he says he can’t afford to pay because he’s unemployed. Meanwhile, more chemical loos have gone missing from the new Trakia Highway. Police are still mystified as to the culprits, the motive and how they managed to shift them; they weigh a quarter of a tonne each. Georgia. After recently mooting the possibility of reopening the border to vehicles – for the first time since the 2008 war – a barbed wire fence has now been erected along the frontier with South Ossetia, apparently by Russian guards. It’s a highly provocative act though diplomatic channels are still open. Similarly, Northern Kosovo is the site of escalating tensions. Audrius Senavicius, a Lithuanian customs official from the EU’s EULEX mission, was shot and killed in an ambush yesterday morning at Zvecan to the north west of Mitrovice. Last night a bomb went off outside an office building in Mitrovice. Both incidents are likely attempts to destabilise the region ahead of landmarks elections on 6 November, the first vote held since a peace deal between Serbia and Kosovo was negotiated in the summer.