Turracherhohe – Turracher Heights, 1,763m – might not actually be that high but it is very, very steep.

This challenging road has been instrumental in the development of at least two motoring legends. 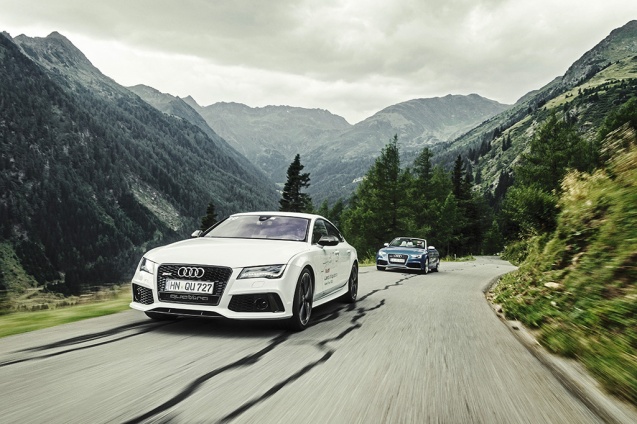 At 34%, Turracher was once the steepest road in Europe. Porsche – headquartered in nearby Gmund during the 1940s – used this road to test prototypes of the 356. In the late 1980s, just before the steepest parts were trimmed back to 23%, Turracherhohe became the birthplace of another motoring legend.

In January 1978, Audi engineers demonstrated a revolutionary idea to the company’s board of directors: a four wheel drive road car. Previously the preserve of cumbersome all-terrain vehicles – like the 75bhp Iltis military vehicle that embarrassed high powered road cars on a previous test in Sweden – the way the first quattro dealt with the fearsome snow covered Turracherhohe convinced everybody that four wheel drive was the way to go. Note the snow chains road sign on the right. It says they must be used apart from light vehicles with all wheel drive, or winter tyres with spikes. Legend has it the quattro made the run on summer tyres though given what we know these days, that summer tyres are useless on snow even on four wheel drive cars, perhaps that one should be put down to hype.

Turracher Strasse – route 95 – starts from north west Feldkirchen in south central Austria. But Turracherhohe – Turracher Heights – picks up after the Nockalm Road (see below) outside Reichenau. It tops out at Turracher village which straddles the boundary line between Austria’s Carinthia and Styria regions, beside the vast Turrachsee.

Gradient apart, Turracherhohe is not a typical mountain pass road, strewn with hairpin bends. @ParaboliqueUK, who drove it earlier this year on an epic 4,000 mile trip around central and west Europe, describes this road as, ‘arguably the finest of the whole trip… mindblowing and very, very fast. The uphill section is wonderful and the downhill mile upon mile of fast sweeping S bends.’ All in all it sounds like Turracherhohe is definitely worth putting on the list.

Pictures courtesy of Audi AG/Audi AlpenTour 2013. For the (privately owned) Porsche Museum at Gmund, just off the A10 five miles north of Spittal, see www.auto-museum.at