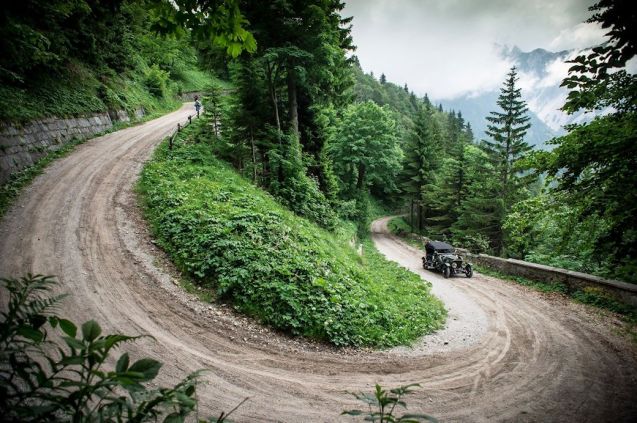 The Loibl Pass, Slovenia, one of many spectacular roads tackled on the 20 Ghost Club Centenary Alpine Trial this summer. Picture courtesy of Rolls-Royce Motor Cars Limited.

Not surprisingly, the Rolls-Royce 20 Ghost Club Centenary Alpine Trial won Best Rally of the Year at the International Historic Motoring Awards this week.

A recreation of the 1913 Alpinefahrt, 47 vintage Rolls-Royce Silver Ghosts left Vienna on 14 June for two weeks and 1,800 miles driving through the Alps, including some roads – like the 28.5% Loibl Pass in Slovenia, above – not normally open to the public.

The Rally’s return to Vienna on 29 June marked 100 years exactly since James Radley’s victory in the 1913 race, after which Rolls-Royce gained the reputation for building ‘the Best Car in the World’.

Having driven some of these roads ourselves, we cobbled together a feature on the information available beforehand, The Rolls-Royce Route through the Alps. It turned out to be inaccurate in some respects, especially in the latter stages, but basically describes the enormous loop the cars drove south west of Vienna via Innsbruck, the Dolomites in northern Italy, Slovenia and Croatia.

Or, read the official tour diary. The photographs are amazing.

Other European nominees in the Rally Awards included the Peking-Paris Rally, London to Lisbon, the Ypres-Cortina Pirelli Classic Marathon and the Lamborghini 50 Year Anniversary Tour.

Radley’s 1913 winning car and its modern day Ghost counterpart will star in a special ‘Night of the White Gloves’ event at the BMW Museum in Munich on Friday 22 November 2013. Visitors will be given a pair of gloves and invited to explore the cars close up. Both cars will be on display until the New Year.