Weather: Dry central Europe but windy in the north and rain across the south.

Early adopters. The first BMW i3 electric cars hit the road today. The company held a special event at its Munich headquarters last night (above) where six customers got their keys a day ahead of everybody else. BMW is bullishly confident the i3 will turn out to be a huge success. Executives were considering increasing the first year’s production run of 8,000 cars because demand has been so strong. Of those, 200 are coming to the UK reported Auto Express yesterday, half of them the range extender version with a small petrol engine to supplement the electric motor. Pic via @Sycamore_BMWi Peterborough. Update: AutoNewsEurope reports on 18 November that BMW has received 100,000 requests for i3 test drives.

Jeremy Clarkson’s column, The Sun, 19 October 2013. FYI: Driving licences are returned via the British Embassy in Paris and the DVLA. Tip via WhiteVanWoman at www.FinalGear.com. 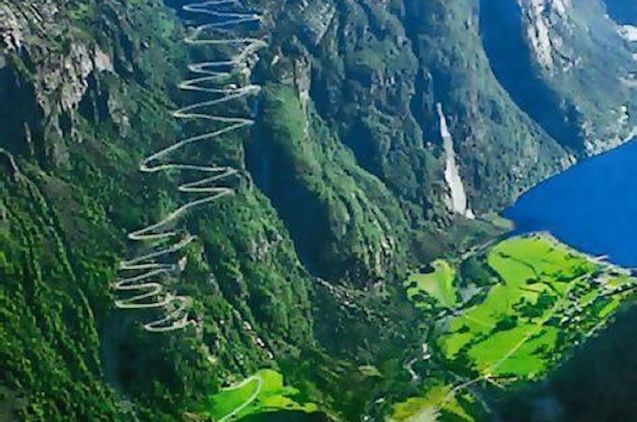 NORWAY: rising 640m in twenty seven hairpin bends, and a 1,100m tunnel, the Fv500 Lysevegen Road was opened in 1984 as works access during the building of the Tjodan hydroelectric dam. Before that, residents of Lysebotn village at the bottom could only reach the outside world via boat. Even then the road is only open from May-October/November depending on snow. We’ve just ‘driven’ Lysevegen on Google maps; happy to say, despite what it looks like from here, that there are barriers. It doesn’t look too bad, with a maximum gradient of ‘only’ 10%. Lysevegen is in the south west of Norway, near Stavanger, at the eastern end of Lysefjord, a 26 mile long fjord with vertical drops in parts of 3,000ft. At the opposite end is Priekestolen, Pulpit Rock, a popular vantage point atop a 600m sheer cliff. Pic via @PlanetEpics.