LD Lines Santander-Poole cancelled due to ‘extreme’ weather in Bay of Biscay. Poole-Santander sails to Le Havre at 13:00.

WEATHER: Unsettled and windy across northern Europe, better in the south.

The roads vignette will cost €100 per year and will be introduced in 2015 according to reports in the German press this morning. Presumably there will be a short stay vignette (though there isn’t in Switzerland). The measure is expected to raise one billion euros! (over four years). We still haven’t seen whether it applies to all roads or just motorways.

note: Public broadcaster Deutsche Welle says the toll will apply just to motorways, but all the stories in the press this morning have been written off the back of a simple Q&A interview new transport minister Alexander Dobrindt gave to Sonntag am Bild, the Sunday edition of the Bild mass market daily, published today. That interview only refers to German roads. The €100 per year figure was suggested by the interviewer; Dobrindt says, ‘One can think about 100 euros. But it can also be somewhat more or less.’

update: a journalist from Deutsche Welle responded to our query over which roads the vignette will apply to. @Marks_hallam says, ‘Autobahns for sure, some “Schnellstrassen” [dual carriageway] perhaps, as I understand it. Criticisms include pushing traffic to smaller streets. I’m happy to be corrected, though… ‘

Traffic migrating to back roads is a well-known side effect of motorway toll schemes. Mark Hallam also makes the point that €100 is more than some drivers of low emission cars currently pay in road tax. It’s worth remembering how the German vignette will work. See this article from Tax News in August (which also refers to the vignette applying to the motorway network). 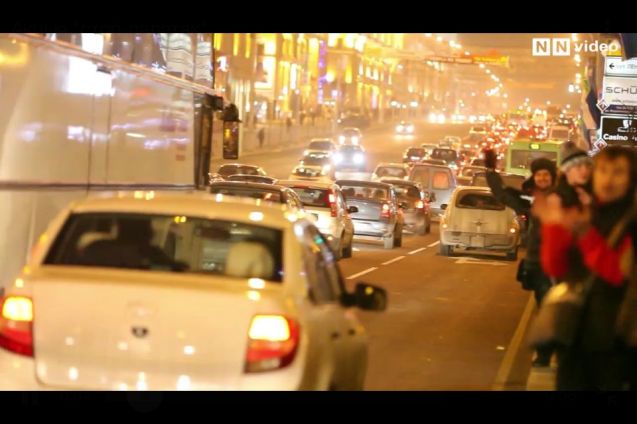 Belarus: extraordinary scenes in Minsk on Friday night as hundreds of drivers took to the streets over a new car tax. The cause however is secondary to the fact it took place at all. Mass protests are rare in Belarus and dealt with harshly. ‘Athletic men in civilian clothes’ – a euphemism for plainclothes security forces – were out in force, filming events, taking registration numbers and bundling away troublemakers according to reports. Drivers honked their horns, stopped in the road with their bonnets up for ‘repairs’, or cruised slowly up and down Independence Avenue in the city centre. The protest lasted for an hour.