CHANNEL DELAYS: Severe weather in the West causing disruption until early next week.

WEATHER: Heavy snow Norway + Alps. Gales in the North. Unsettled across much of Europe. Windy.

TRAFFIC: finally quieting down north east Italy on roads to east of A22 Brenner motorway. Earlier queues southbound on A22 at Trento now gone, and queues A1 Arezzo-Rome.

France: Anti-Ecotax roads demonstrations in Brittany today were ‘symbolic’ and did not block traffic. 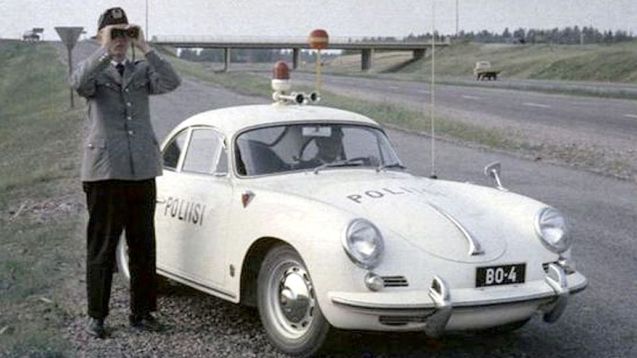 FINLAND: what started out as the riot squad 83 years ago, in the wake of a civil war – then booze busters during Prohibition – turned into a dedicated traffic police force in 1935 with the nickname ‘Lentava Poliisi’, Flying Squad. As you can see they had a tradition of cool cars from early on, latterly including a Dodge Charger, Audi 90 Quattro and Jaguar S-Type R, all donated after public appeals. Most recently they took delivery of a Mercedes-Benz CLS Shooting Brake 4Matic. Up until the turning point in road safety in 1973 – when deaths peaked at over 1,100 and a stricter regime was brought in – Finnish police cars carried mechanics and even spare petrol to help motorists in difficulties. With fatalities now at a fifth of those in the 1970s, as of 1 January 2014 the traffic unit has now been subsumed into the regular police force. Pic via www.poliisi.fi info via www.yle.fi