Catching up with this week’s random pictures, from a quiet mountain pass in Andorra to an easy high in Switzerland, a once-in-a-lifetime adrenalin-fuelled ascent in Spain and, a great diversion on the way between Milan and Rome (or Florence and Bologna).

Oh so quiet. In the days before we realised just how busy they can get, we took this tranquil mountain pass – the D25 Port (or Col) de Pailhères above Ax-les-Thermes in the French Pyrenees – entirely for granted. Squiggly roads miles away from anywhere will automatically be quiet, right? Unfortunately not. However, apart from the big name roads, the one thing the Pyrenees really lacks beside the Alps is catchment area. Fewer people live within striking distance. Even if that doesn’t guarantee a clear run at the height of summer, going just out of season, June/September, means it is not impossible to have the place to yourself.

It hasn’t exactly been neutered but a large scale overhaul in 2009 did remove many of the cascading curves the Julier Pass was previously well known for. However, it still tops out at 2284m – 7,493ft – so heads are still in the clouds, on a level with some of the surrounding peaks. There’s no better way to get high without scaring yourself half to death. What Julier really is these days is a proper working road, 27 glorious miles on H3 from Tiefencastel to Silvapana, between the storied Engadine Valley – see James Bond’s On Her Majesty’s Secret Service – St Moritz, and the rest of Graubunden in east Switzerland. It also neatly strings together with the H19 Oberalp and H29 Bernina passes for fabulous mountain roads between the Gotthard Tunnel in south central Switzerland and the Valtellina Valley in northern Italy.

Fly with the Maltese – peregrine – falcons at the top of Mont Caro with the lush Ebro Delta at your feet and the craggy massif of the Els Ports national park behind. Incredible views, and cool whatever the weather below, but getting there can be a trial. Head east from Tortosa on Carrer Diego de Leon, right from the centre of town. After 5km the initial ascent begins, so steep it’s an effort to lift your head off the seat back but you must else you cannot see the road. Caro is only 1447m (4,747ft) high but the drops are sheer and barriers rare and random. If anything comes the other way you have to drive closer to the edge than you would ever dare walk. But it’s strangely addictive too as in, once you start you just cannot stop, it’s far too narrow to turn round. If there’s a scarier road in Europe we’ve yet to find it. 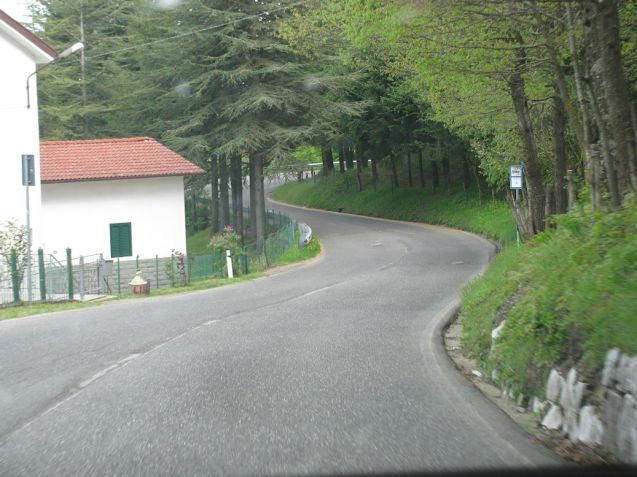 Not traditional passes in the sense of being vertiginous natural passages between mountains – the Tuscan Apennines top out at less than 1,000m (3,300ft) – but the views over lush green steeply rolling countryside are idyllic if you can bear to stop and look. What was once the main road between Bologna and Florence – SS65 still closely shadows the A1 Autostrade del Sole a few miles to the east – is now a playground, mainly for bikers. Over sixty miles of corners linked by short straights with a top speed of around sixty miles per hour. Raticosa and Futa, one after the other, are frantic but fantastic. The challenge is not to lose it but the consequences if you do are likely to be minimal. SS65 is the greatest way to break up a drive from Milan to Rome (and free). Even better, when we were there one late spring sunny weekday afternoon, it was empty.