Seatbelt Week: 8-14 September, police forces across Europe concentrating on seatbelt enforcement checks, coordinated by TISPOL, the pan-European Police federation. Recovering after flash floods over the weekend in southern Italy, and Bulgaria. Overnight road works on the A20 in Dover and Gotthard Tunnel. Continuing threat from volcano eruption in Iceland.

For the latest on the Calais Migrant Crisis see here: Schengen Zone under fire.

FLATS IN THE FAST LANE

Projects in Italy and Germany aim to re-use aging bridges as housing developments. 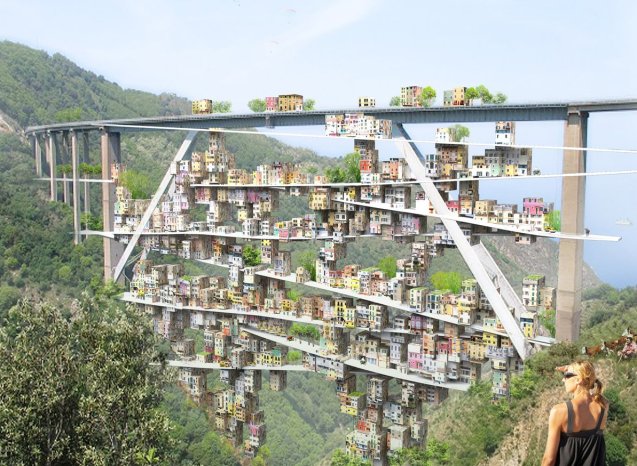 Solar Park South: an international design competition to reimagine the A3 motorway bridge in southern Italy.

It’s not a new idea of course. Florence’s Ponte Vecchio built in 1345 is crowded with buildings. With guaranteed stunning views the attraction for modern home owners is obvious.

Pictured above is an entry in the Solar Park South international design competition, to re-use a 10km viaduct on the soon-to-be-decommissioned A3 Autostrada del Sole between Scilla and Bagnara in Reggio Calabria, on the very tip toe of Italy.

It’s not clear if it will actually be built – entrants were only asked to submit two pictures and a short essay – but the Italians are keen to keep the bridges which were designed by well-known architects and tower hundreds of meters above the landscape. Apartments would have a view of the sea on one side and mountains on the other.

Meanwhile, over in Germany, a similar scheme has been submitted to local planners, and it definitely is serious.

‘Bridge of the Future’ will reconstruct the fifty year old Lahntalbrucke on the A3 at Limburg, between Cologne and Frankfurt.

Each of the four towers will have seven thousand square meters of flats, offices, hotels and restaurants.

The authorities are said to be looking sympathetically at the project as it would save demolition costs. A parallel replacement bridge is currently under construction and scheduled to open in 2016. 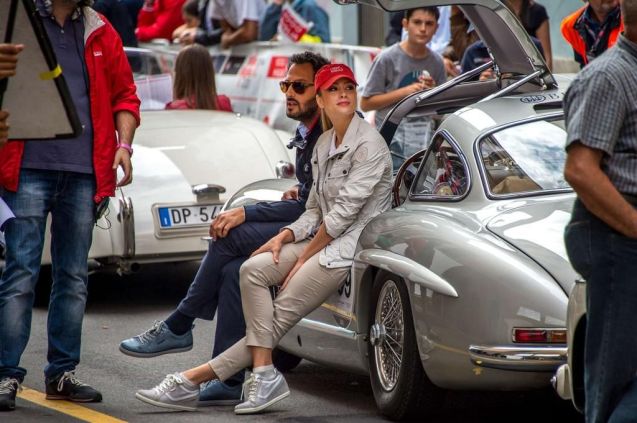 Brescia: Martina Stella and Fabio Troiano take a break from filming ‘Rosso Mille Miglia’, a feature length drama documentary based on the eighty year history of ‘the most beautiful race in the world’. Set for worldwide release in Autumn 2015, the film ‘weaves together the life, the memories, the mysteries and the enthusiasm of the players, united by love for four wheels and divided by ancient secrets, fascinated by the presence and history of a fabulous OM 665 Superba – a car built in Brescia, who won the first edition in 1927 – lying for decades dismantled and forgotten.’

roundup: GIBRALTAR. The UK says it would be theoretically possible for Gibraltar to join the Schengen borderless zone – as a way of escaping chronically long border queues – but negotiations would be lengthy and complex and require Spain’s agreement reports GBC News. Meanwhile, diversions are in place from today as work starts on the Spanish side to improve border flow, in line with EU recommendations. Delays are expected to worsen. The work is scheduled to end next March. NEWHAVEN-DIEPPE. LDLines’ contract to run the ferry service has been extended for another year. There had been concerns the route would close as French authorities looked to reduce their subsidy. TURKEY. An Italian man was stabbed to death and his wife wounded early Saturday morning after an intruder entered their motorhome apparently through the roof ventilation window. The couple were parked in the Derepazari district in Rice province on the north east coast. Five people were detained. SWITZERLAND. The Sustenpass was closed for several hours on Saturday afternoon after a car and minibus were involved in a head-on collision says thelocal.ch. Sixteen people were injured including one seriously. The minibus was apparently attempting to overtake a tractor at the time.