The new Austrian vignette goes on sale at the end of the month with prices rising by an average 2.1%. Delays expected on Alpine roads for the next two weekends during the annual cattle drives. Maserati’s Race To Modena reaches Moscow. 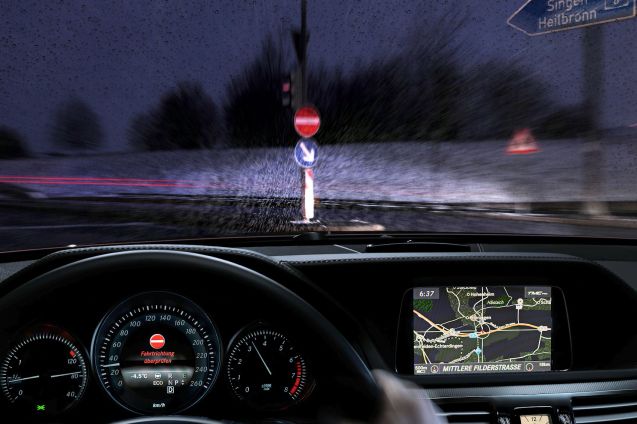 Wrong way driving is a serious problem in places on the Continent.

Rather than errant British drivers, overwhelmingly the issue is caused by mad, suicidal, dotty or drunk locals.

It is such an established phenomenon there are actually phrases for it: Geisterfahrer in German, Spookrijder in Dutch and Conducteur Fantome in French (all translating as Ghost Driver).

There are around 400 incidents each year in Belgium, for instance, and over 2,000 in Germany, more than seven a day. Ghost driver warnings are almost routine during radio traffic bulletins.

In serious cases the consequences can be catastrophic, particularly in delimited Germany, where 22 people died in wrong way driving incidents in 2013.

Last week the Luxembourg government said it was keeping a close eye on a recently announced German project to tackle Ghost Driving once and for all.

Currently the only preventative measure are the Stop Flasch no entry signs at the top of autobahn slip roads.

A number of solutions will be tried on a test stretch of motorway with the likely solution, according to reports, being a series of flashing lights activated by road way sensors. However, since Ghost Riders are not such a big issue in France, Holland or the UK, the root cause is likely to be road design.

Meanwhile, Mercedes has introduced wrong way warnings on its latest cars. The camera-activated traffic sign recognition system cross checks with the satnav to alert the driver with warning graphics and beeps. It will be rolled out across the rest of the range in due course but is so far is only available in Germany.

The one thing drivers who find themselves driving the wrong way should not do is attempt to turn round. The official advice is to switch on headlights and hazard lights and pull over onto the emergency lane.

For those facing a wrong way driver, the Belgian authorities advise to keep to the right hand lanes. Spookily, studies show Ghost Drivers have a proposenity to veer to their right.

Azure: Austria’s 2015 vignette goes on sale at the end of November though the lime 2014 annual sticker is still valid until 31 January 2015 (14 months in all). The vignette is needed to drive on most motorways and expressways apart from those with pay-as-you-go tolls such as the A13 Brenner road. Prices have increased on average by 2.1%, to €8.70 for the ten day pass for cars, to €25.30 for two months and €84.40 for the year (€5, €12.70 and €33.60 for bikes). The revenues 100% finance state-owned roads operator ASFINAG. Compared to neighbouring countries the Austrian vignette is good value. A seven day pass in Slovenia costs €15 and €10 in Slovakia.

roundup: THE ALPS: Alpine drives are likely to be interrupted for the next two weekends as cattle are brought down from high pastures (Viehabtrieb) warns ADAC. With combined herds sometimes thousands of animals strong, waits can be considerable as well as unpredictable. Drivers will also have to contend with the flocks of tourists who come to watch. Places certainly to avoid include Nesselwang tomorrow (16 September), Immenstadt and Tannheim on Saturday (20 September) and Zillertal on Saturday 27 September.

Maserati’s 12,000km, 35 day Beijing-Modena tour reached Moscow on Saturday. By our calculations, they have another six days to cover the remaining 2,730km to Italy via Belarus, Poland, Czech Republic and Austria. The trip is part of Maserati’s centenary celebrations. Update: they actually arrived on Wednesday.

Latest Crossing the Channel special offers: bikers heading for the Magny Cours Superbike festival in October can cross with MyFerryLink Dover-Calais from £35 each way. Book a short break with P&O Dover-Calais before this Thursday – 18 September – for travel before 17 October, and get a free £5 beauty voucher with three day returns at £48, or five day returns for £56 (offer code 5BTVCH).