Also, Aston Martin heads to night time Berlin. Couple in big trouble after leaving daughter at French service station. Did you know there was a minimum speed limit on Belgian motorways? Coach passengers and truck drivers are being held up the most by a new ‘intelligent frontier’ with Spain. 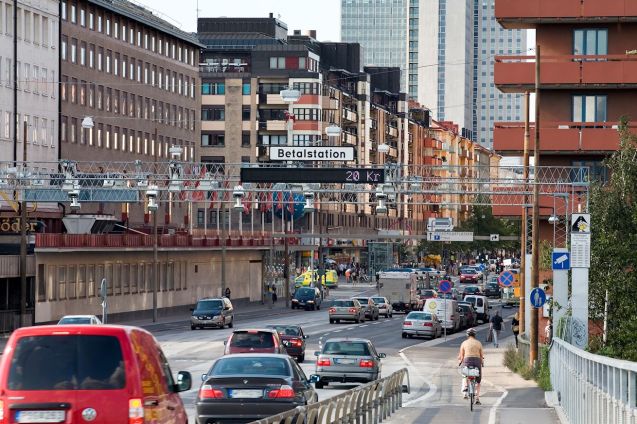 The Swedish Transport Administration is having problems with its system for processing congestion zone fines.

More than 14,000 complaints have been made this year, 1500 of them from foreign drivers, over unwarranted charges for the zones in Gothenburg and Stockholm.

‘The system is not one hundred percent certain,’ a spokesman for transport administration Trafikverket admitted to Finland Times.

The system can apparently mix up similar registration numbers, or misread dirty plates.

Foreign drivers were exempt from the congestion charges until the beginning of this year.

Of the 82,000 fines issued to visitors from abroad last year, only 8% were paid.

Neither parking nor congestion zone fines are not included in the cross-border prosecution directive.

Such fines have been recoverable from foreign drivers for some years, depending on whether local authorities have agreements with national collection agencies.

Several Swedish parking firms do have contracts in place with London-based Euro Parking Collections, for instance.

However, another Trafiksverket spokesman said, ‘We don’t have any foreign addresses in our database.’

For more information of Stockholm and Gothenburg congestion zones, in English, see Epass24.com.

roundup: FRANCE. A couple were left red faced – and possibly facing serious sanctions – after leaving their 3-year old daughter at a service stations on Sunday reports AFP. The family were heading to the Cote d’Azur when they stopped at a service station just south of Valence on the A7. They were another 150km into the journey, on the A8 near Aix-en-Provence, when they realised the child had been left behind, and only then because they heard an appeal on the radio. BELGIUM is one of the few European countries which has a minimum speed limit on the motorway (Germany does not, contrary to popular misconception). Last year 122 drivers were fined for driving at less than the legal minimum of 70kmh says automobile association VAB – presumably it doesn’t apply during traffic jams. GIBRALTAR. Except from occasional delays, it seems car drivers have not had too bad a time since the recent introduction of new electronic passport readers, part of the new ‘intelligent frontier’ installed at the border. However, pedestrians (including coach passengers) and truck drivers have suffered. A thousand day trippers have to wait for up to two hours in the sun each day according to GBC News as their identities are verified. Meanwhile, the coaches themselves have to use the notoriously slow-moving, separate commercial entrance. The Gibraltar government has sent a 70 page report to the European Commission detailing the delays over the past month.