As holiday queues go on throughout the night, a look at some alternatives to Switzerland’s famous Gotthard Tunnel .

France wasn’t the only place suffering heavy traffic on Saturday.

The combined northbound queue for the Gotthard Tunnel in Switzerland was still 14km long at 18:30, a delay of more than two and a half hours.

With another four ‘black’ weekends to come before traffic finally eases off after the summer holidays, drivers can be forgiven for desperately examining the alternatives.

The official advice is that, with delays of more than an hour at Gotthard, drivers should divert onto the A13/A3 via Chur and Zurich. This adds an extra 82km, or around one hour, to the journey between Bellinzona and Basel, for instance.

That might not be too bad but – for long stretches – the A13 is single lane, including the San Bernardino Tunnel.

Queues at San Barnardino are not normally quite as bad as Gotthard but, with the extra mileage, any advantage is slight hence probably why many drivers don’t seem to bother.

On Saturday, drivers would have to exit the A2 at J44 Biasca and complete the remaining 36km on the H2 road.

The Gotthard Pass in hardly congestion free either though the road works on the northern stretch are lifted at weekends during the summer.

More interesting, we think, is the Lukmanier Pass from Biasca. This road heads north to hit the east-west H19 road at Disentis. Head west to Andermatt, at the top of the north stretch of the Gotthard Pass, via Oberalppass (see this route in more detail here).

The only other thing to do is give Gotthard a totally wide berth during the summer (the queues are not confined to the weekends; at the time of writing mid-afternoon Monday there is a 6km queue northbound. See the annual ‘Staukalender’ jam calendar).

German motoring club ADAC recommends the ‘good, but not very cheap’ Lotschberg Car Train between Goppenstein and Kandersteg in south west Switzerland, on the route between Milan and Bern. The fifteen minute journey costs €25 each way.

Of the other major Alps crossings, the Mont Blanc Tunnel can be just as bad as Gotthard though the Great St Bernard Tunnel, on E27 Aosta-Martigny, is a good dodge.

If it suits your route, the A32/A43 Turin-Lyon Frejus Tunnel is a better bet. It costs the same €43.50 each way as Mont Blanc but is much less congested.

Delays at Gotthard are signed at regular intervals along the A2, otherwise check the red icons on the TCS traffic page. 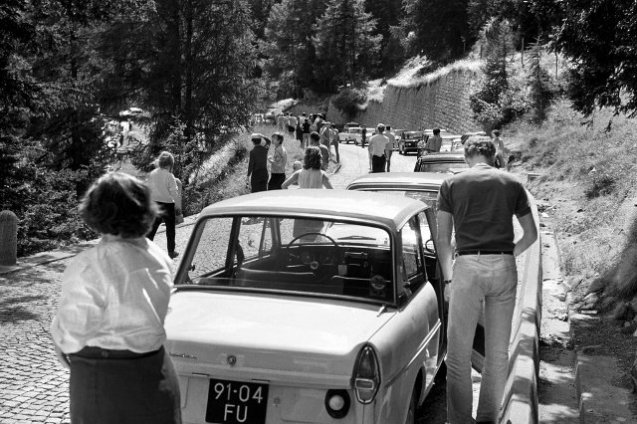 No end in sight: the Swiss will hold a national referendum, probably in October, to decide on whether to build a second tube for the Gotthard Tunnel. A recent poll in Blick says more than seventy percent of voters are in favour but, even if it is built, it won’t mean an end to the queues. After the first tube is refurbished, by 2026, at best the second will carry one lane of traffic (it might even be filled in). Meanwhile, the only hope of – some – relief is if freight traffic is transferred to the new Gotthard railway tunnel due next year. Photo, the north stretch of the Gotthard Pass, 1969 via Swiss.info